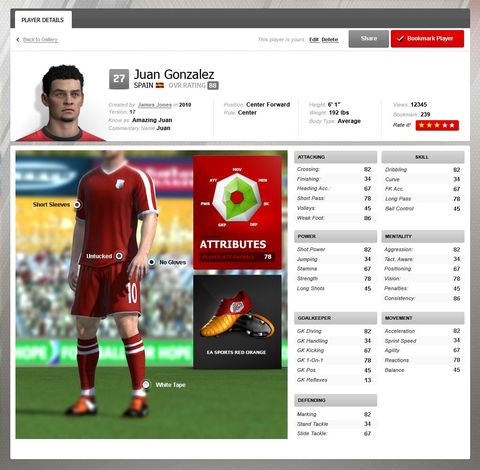 FIFA 10’s a fantastic footy game, neatly tailored to both the Wii’s mechanics and its audience. So, having hit on a successful formula, what has EA gone and done for this year’s version? Changed it, that’s what, and not for the better.

The crux of the problem is the new five-a-side street football mode, Hit the Streets. It lets you play in a number of urban or indoor arenas as any team from the comprehensive roster of official leagues. You choose a team of five from the squad and they appear on the pitch decked out in ‘street’ wear, such as hoodies and three-quarter-length shorts. Sigh. Clever footwork and special moves are the order of the day here. The D-pad allows you to pull off jinks and juggles, while a shake of the remote will play a wall pass and a shake of the Nunchuk knocks the ball up for you to volley.

Completing passes and tricks fills up a ‘special’ bar, which you activate by pressing 1 – not the best placed button to reach for when you’re bearing down on the goal. Specials include extra pace for the whole team, curve shots and making the opposition turn into midgets. It’s all very silly. We liked the similarly silly stuff in last year’s 11-a-side games, but it doesn’t work here because the environments are so cramped that there’s very little time on the ball, and the tricksy D-pad stuff is awkward to pull off before you get closed down. The side-view camera is a pain in the backside too – you’re in an enclosed space with walls, so the ‘ghost’ of the near wall is nearly always in the way.

This mode is a non-starter for us. We rapidly tired of it and had no desire to go back to it. However, five-a-side also makes an appearance the in Streets to Stadiums mode, and here it’s actually very good. How so? Well, Streets to Stadiums is essentially the Be a Pro career mode from FIFA on other formats, where you control one player and take him from promising amateur to club side hero to international superstar. On the Wii, instead of sitting on the bench for Torquay United or whoever, you start out playing in a five-a-side league.

The shift to a behind-the-goal camera position and the fact that you’re controlling just one player make the five-a-side a far more enjoyable experience here. It’s easier to see what’s going on and pull off your fancy moves, while your own positional play makes matches a deeper and more thoughtful proposition than just steaming forward and shooting at the goal.

We also like the structure of the solo career mode, which borrows heavily from last year’s Team Manager mode (more on this year’s shortly). Your key currencies here are XP and Fame. XP is earned by completing passes, making successful tackles, scoring goals and winning matches. The resulting points can then be spent on improving your player’s stats.

Once you acquire enough Fame you’ll start to attract attention from both sponsors and teams. After a season of five-a-side, we caught the eye of a number of Championship and League One sides, eventually signing for Plymouth Argyle. Once you’ve made it to a proper league, the only way is up as your stats and Fame increase. You soon find yourself being courted by bigger and better clubs, the international side and an array of sponsors wanting you to wear their threads and boots.

For those who already have FIFA 10, the Streets to Stadiums mode more or less justifies a purchase of FIFA 11. It’s nicely pitched and offers decent longevity, with the variable difficulty settings making it a challenge for all abilities. However, the rest of the game we’re less impressed with. As ever, there’s a quick match mode (Hit the Pitch – as opposed to hitting the streets) and a competition mode where you can play in all the licensed leagues and cups from around the world. It’s no more than you’d expect from FIFA as it’s what it does every year. The ‘manager’ mode, Battle for Glory, is more or less identical to that of last year’s game.

No, our big beef is that EA has taken the fun out of the 11-a-side game. All that ridiculous scoring of free kicks from the halfway line, Bullet-Time-alike effects, screen blur and general over-the-top action has gone, stolen by the mediocre five-a-side game. It plays more like a traditional football sim and is all the more boring for it. Don’t get us wrong - we love a good football sim, but after last year’s high this is a disappointing comedown.

If you'd like to see more articles from NGamer, you can get a subscriptionhere.