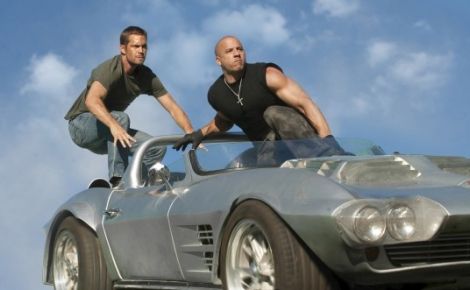 Muscle cars driven by pec-flexing guys watched by girls in hotpants… you’d think the Fast And The Furious franchise would’ve run out of gas by now. Think again.

This latest instalment, beginning immediately where the previous episode left off, is like The Avengers for F&F fans.

Still, getting bigger is what this car-crunching franchise is all about – and on that score FF5 doesn’t disappoint. Forget FF4’s opening gas-tanker heist. Here, we’ve barely taken our seats before Mia and ex-cop boyfriend Brian (Paul Walker) have busted Dom out of the prison bus we last left him on.

Say what you like about director Justin Lin’s lack of subtlety (or understanding of the laws of physics), but he knows how to kick-start an action movie.

Heading to Rio with intent to lay low, the trio then take a job for cash – hijacking three cars from a moving train in the film’s stand-out sequence. But double-crossed by their Brazilian partners, led by ruthless drug overlord Reyes (Joaquim de Almeida), the gang is falsely fingered for the murders of three US DEA agents on the train.

Enter tank-like federal super-cop Luke Hobbs (tank-like Dwayne Johnson), who storms into Rio to take them down. But can he do it before Dom and co – backed by an F&F dream team – pull off One Last Job?

With writer Chris Morgan carving his Brazilian villains from a boxset of Latino clichés, the influx of old friends is highly welcome. In particular, 2 Fast 2 Furious alumni Tyrese Gibson and Ludacris bag some choice lines, fuel-injecting the film with much-needed laughs. But the big arrival, of course, is Johnson.

Repeatedly going toe-to-toe with Diesel, as they’re auditioning for The Expendables 2, The Rock slots into this universe of dick-swinging machismo with ease – though a late-breaking character development will likely summon as many jeers as cheers.

Other toe-curling moments – from Lin’s tourist board aerial shots of Rio to Dom’s unconvincing chemistry with a Brazilian female cop (Elsa Pataky) – ensure this is no mould-breaker. But this being his third F&F in a row, Lin knows his crowd.

A brief visit to Rio’s street-racing scene shows he hasn’t forgotten the franchise’s origins, even if this at times feels more like The Italian Job with better cars.

And the finale – which leaves half of downtown Rio in tatters – sums up this series: full-throttle action that doesn’t care how preposterous it is.