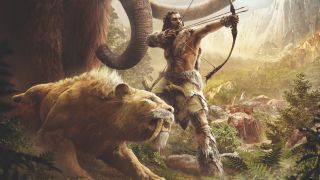 Amnesty time: I’m a sucker for games that look really, really nice. Yes, I know, gameplay over graphics and all of that, but in this day and age there’s no reason why we shouldn’t expect both. And in any case, a beautifully realised world can be the ingredient that tips a good game into the realm of greatness.

Such is the case with Far Cry Primal. I’ve spent an inordinate amount of time losing myself in its world, despite it being quite a meat and potatoes adventure game at heart. It doesn’t even pass my ‘is it fun to move around the map?’ test which usually dictates whether or not I persist with an open world game, it being little more than a prehistoric reskin of Far Cry 4’s awkward, mountainous landscape.

With the wheel yet to be invented, it is in fact a pain in the ancestral ass to get anywhere in Primal, even with the presence of fast travel and the ability to tame and ride beasts (which reportedly was a feature patched in late in the game’s development to make travelling less of a slog).

But it’s testament to how luscious and captivating Far Cry Primal’s stone age skin is that it took the entire world over a week to realise that Ubisoft had done little more than dump the Himalayas into northern Europe and add a few orange filters. But it doesn’t matter. At their best, games have an ability to transport you to a different time and place that’s unmatched by any other kind of media, and Far Cry Primal dumps you deep into prehistory just as painlessly as it dumps Everest onto Gothenberg.

Primal has you at ‘hello’ (or rather, ‘ugg’). Within seconds of pressing start, you’re in the zone: stranded in the middle of an ancient forest far, far away, rustling through the prehistoric foliage with your unintelligible caveman crew in the quest for something, anything, to kill and eat.

And then, with a screen-shuddering thud, your next meal stomps into view; a magnificent mammoth, its eye as close to our quivering avatar as this screen is to your nose. We gingerly follow the beast into an opening and there, partially-obscured in the thick primordial mist, is one of the most breathtaking scenes you’ll see in video games all year: an entire herd of mastodons, frolicking, playing, bathing.

It is an incredible opener that sucks you into Primal’s universe instantly, and it’s one that, on the back of its immersive audio and visuals, the rest of the experience manages to live up to. It’s such an easy world to lose yourself in that your mind starts filling in the gaps, and you begin explaining away the game’s flaws as part of the larger fantasy. So what if it’s a difficult world to get around in? This is the stone age – you’d expect the terrain to be a little rugged and bruising.

The visuals are easily the game’s greatest asset and it’s no surprise that most of the changes Ubisoft have made to Primal post-release are geared towards heightening the immersion further. These include the ability to remove screen clutter, for crafting to take longer, and an option to make animals spawn less often, requiring hunters to lie in wait for their prey rather than sprinting around aimlessly until they eventually bump into a herd of deer.

The latter modification would be a disaster in a less absorbing game, but in Primal, patiently stalking rare prey and earning every scalp through good hunting practice is all part of the fun. As I said, in a game this immersive, your imagination is keen to smooth over things that would be perceived as flaws in rougher offerings.

But it only takes one small bad piece of design to send even the most brilliantly conceived world crashing down to reveal the crude movie set underneath. Primal’s most disappointing element is one that had the potential to be brilliant – the Beast Master hunt quests, where you trail a mighty rare creature (such as the sabre-toothed tiger that wipes out your clan in the aforementioned opening) and hopefully weaken it enough to tame it to do your bidding.

On first play, it is exhilarating. Glimpses of the beast on the horizon as you follow its tracks instil a healthy level of fear; fear that panics your decision-making as you hurry around your camp setting traps and crafting supplies during the brief window before its impending arrival. The opponent is a worthy one – faster and stronger than the standard beasts, and sporting a health bar longer than you could chuck a spear.

It is almost inevitable that this capable hunter will kill you on your first attempt, but that doesn’t mean you can’t go down swinging. At first, your primary instinct is simply to survive. Then thoughts slowly turn towards turning the tide – using the uneven terrain to your advantage to create enough distance between yourself and the animal to perform vital crafting; serving yourself up willingly as bait to trick the tiger into paths laden with traps.

And then, slowly, surely, superbly, the hunter becomes the hunted. With around a third of its health bar remaining, the tiger turns tail and runs back to its lair, allowing you to give chase and finish the job in its own backyard. Unfortunately, there’s nothing more dangerous than a cornered animal, they say: once you’re in the tiger’s cave, space is at a premium and any mistakes swiftly prove fatal. On my first attempt I died having painstakingly whittled my foe down to about 10% of its health. When you experience a near-miss this heartbreaking, after battling for so long, and the prospect of starting afresh doesn’t daunt you, you know you’re dealing with some seriously good game design.

But then, on the second go around, the walls came crumbling down. When the beast returned to the scene, I was shocked to discover that its health bar didn’t regenerate. This was a game-changer, and not for the better. Without any tangible punishment for death, and thus no reason to stave it off, frantic, heart-stopping hunting instantly dissipated into a battle of attrition as I chipped disinterestedly at its health bar, falling and respawning numerous times. After ten minutes or so, the tiger finally cracked, and bent the knee for its new, cheaty master.

I must confess, a pang of shame runs through me every time I send my once-proud adversary into action to do my menial bidding for me. It looks up to me, sadness in its eyes, before I send it scurrying down a cliff to wage war with a bear, just so I am able to craft a slightly better meat bag or whatever. I have no business ordering this fearsome jungle creature around. He beat me fair and square. Bang to rights in his own cave. But by failing to punish failure, the game allowed me to cheat us both.

Perhaps the later added survival mode, which forces you to get through the game on a single life, is the answer to this bad design decision. It’ll be impossible for me to say though, sadly, because I really don’t have the will to go through all that again. Once the walls of immersion come crashing down, it’s impossible to build them back up again.