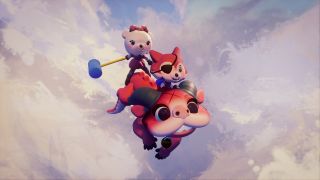 Trying to explain Dreams is like trying to explain a box of bright, brand new paints. It’s not just that the box itself is pretty and colorful and exciting, it’s all about what you can create with it. With LittleBigPlanet the wonderful witches and wizards at Media Molecule gave us a toy box. Now they’ve made an entire playroom. Whether you want to build a whole game or just build for the sheer joy of it, Dreams will be a must purchase for your PS4.

Despite doing my biggest eyes and wobbliest bottom lip we aren’t going hands on with the game, but in truth that’s probably for the best. It's so deep, with each part breaking down into hundreds of different choices, that it’s better that the professionals, Mark Healey, Dave Evans and Siobhan Reddy, are the ones that get to make things.

Dreams isn't just a level editor, it's a world builder. "The whole idea for Dreams is that it's like a dream journal or a sketchbook," says Evans. You build an epic game, a quick little level, or just a monster. You can start from scratch, or use items from the games built-in assets, or edit something someone else has created.

Animating a level is shown to us with that classic feature, the floating platform. Healey builds a platform onto an existing level, goes into animate mode, and just drags it where he wants it to go. Then he swaps straight back to play mode and we see it in action and fully playable. Want to go deeper? You can connect something else in the level to that platform to trigger its movement, or a sound effect, or the music. Oh, and making music can be as simple as singing into an app or the camera, or as complicated as arranging different samples and tracks. There's a whole professional level music synthesizer built into this thing for chrissakes.

On stage at PSX we also get to see a playable music video that’s been made in Dreams. One of the Media Molecule team made the musical track in the game, mixed it, built a working level around it, all when he was taking a sick day. A day when most of us would watch a couple of true crime documentaries, nap, and at best eat our weight in chocolate biscuits.

Moving swiftly on. After release Dreams game will also get a virtual reality update. The idea of being able to build in virtual space - drawing a world around you, could be a real system seller for VR. Tiltshift, Google's VR art package, is one of the most popular VR experiences for early adopters, and this goes even deeper.

Making a whole level seems like a lot of work...

You could be the person who just makes music or characters or trees. "In Dreams, you don't have to make levels," says Evans. "You can just be the person who makes music, or you could make bow ties, fingernails, whatever you want to make." You can let other people into your levels to collaborate too, so you can officially freeload on more talented friends. Evans hinted that teams or clans could band together, so start picking out witty and adorable collective names now.

What if I just want to collect things?

If you think you’re terrible at making things you can just bask in the glow of reflected glory by curating amazing trees or lamps or birds that other people have made. Maybe you’ll get a following as the good tree guy? All without ever having to create anything yourself. The team called these people "taste makers." It seems to work like a Dream-y Pinterest - but with music tracks and props and characters rather than holiday baking ideas and bullet journals.

"Maybe you're really into the horror genre," says Evans as an example. "You spend your time searching for the coolest new horror levels or scary experiences, you get known as a curator of horror. You publish playlists - maps we call them - of the greatest horror levels you've found."

I'm really lazy though. Can I just play Dreams?

Yes, it is a game. It comes with three different stories that, much like LittleBigPlanet, will be full gaming experiences on their own. They come in three very distinct flavors: a cutesy childhood world with a teddy bear called Frances; a black and neon hacker world complete with bugs; and the most striking, a jazz inspired noir world. "The play experience was really important," says Healey. "You don't have to be a creator at all." It's also all playable in co-op.

Once you've finished Media Molecule's offerings you can make a start on community created levels. LittleBigPlanet proved that show-offs are a godsend when it comes to user created content, and you know there'll be hundreds of worlds to explore once the game goes live. There's even an Auto-Surf function that will let you dive into in community created content and play through playlists experiences. Media Molecule will highlight levels it thinks shine, and is taking cues from social media platforms to build algorithms to make sure the best stuff is easy to find.

Given the interest that other developers were showing in Dreams at PlayStation Experience - like God of War creator Cory Balrog and Capy's Nathan Vella - we wouldn't be surprised to see other studios making guest levels for the game too.

Dreams is coming exclusively to PS4 and PSVR sometime in 2018.