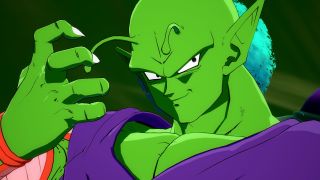 It feels like anyone can pick up Dragon Ball FighterZ, and - in a matter of seconds - take part in a chaotic, rapid-fire brawl that looks straight out of a scene from the enduringly adored anime. That's not just thanks to this 2.5D fighter's impressively vibrant, strikingly accurate art style that makes screenshots of its polygonal 3D models almost indistinguishable from hand-drawn animation cels (utilizing the same brilliant lighting techniques that developer Arc System Works pioneered in Guilty Gear Xrd). It's also the accessibility of the controls, which turn feats of Super Saiyan strength into simple commands that are often executed with the press of a single button. That makes FighterZ perfectly welcoming to the (I'm ballparking here) millions of DBZ fans out there, while still offering the kind of depth, flashiness, and eye-searing speed that genre aficionados associate with team-vs-team fighting games.

It hit me after a series of exciting back-and-forth bouts in FighterZ's three-on-three matches: you need only master the simplest quarter-circle motion to pull off any special move currently available in the game. Of the revealed characters from the still-growing roster - Goku, Vegeta, Gohan, Frieza, Cell, Majin Buu, Trunks, and the more recent additions of Piccolo, Krillin, Android 18, and Android 16 - not a single one has any moves mapped to a reverse-direction charge or the beginner-unfriendly Dragon Punch motion of toward, down, down-toward. If you can consistently nail the quarter-circle motion, a basic building block of fighting games that powers Street Fighter standbys like Hadoukens and Hurricane Kicks, you're equipped to pick up and play any member of FighterZ's colorful cast. That's fantastic news for any player who's ever struggled with missed inputs on crucial special and super moves (i.e. everyone at one point or another), as well as anyone who justs want to pull off cool attacks in their first play session without needing to pore over a movelist first.

FighterZ supplements those standardized special and super move motions with auto-combos, where mashing the Light Attack button (which is basically a beginner's default state) results in a short-yet-effective combo that requires almost zero effort. Such mechanics were once feared as the dumbing down of a genre that values (and often requires) technical execution and game knowledge to be successful - but we've seen plenty of beloved fighters use auto-combos to clever effect that satisfies novice and expert players alike. Guilty Gear Xrd, BlazBlue, Persona 4 Arena, King of Fighters 14 - they've all demonstrated how welcoming and empowering auto-combos can be for new players without throwing game balance or skill out the window. Mashing lets newcomers pull off impressive attack strings without forcing them to learn complex motions and timings, yet auto-combos will always be less effective than optimized manual combos, and they're highly unlikely to catch experienced players off-guard. In other words, auto-combos are a win-win when smartly implemented, and FighterZ seems to be following the trend nicely.

Of course, even with universal inputs that are comfortably familiar to veterans and drop-dead simple to learn as a newbies, FighterZ's roster doesn't feel like a litany of blonde-haired clones. The fighters' inputs may be similar, but their playstyles are encouragingly diverse: Goku and Cell are solid all-rounders who can fight at short- and long-range distances, Frieza and Android 18 (accompanied by special-move assists from Android 17) excel at keepaway with projectile-based defense, Piccolo and Majin Buu mix up their opponents with tricky, hard-to-predict offense, and so on. Interestingly, every character has access to a range of flashy, easy-to-perform mobility and utility moves, such as the Vanish that instantly teleports you behind the opponent, a Dragon Rush that looks like an impressive flurry of flying fists and acts like an unblockable throw, and the Ki Charge that lets you build up to your maximum of seven super meters provided the enemy leaves you alone. These are all easily performed via taps of the bumpers or combinations of the four basic attack buttons, making them a cinch to pull off whether you prefer a gamepad or an arcade stick.

When you're not 100% focused on the blazingly fast beatdowns of FighterZ, it's easy to lose yourself in the stunning visual detail that permeates every moment. The five stages currently on display - West City, World Tournament Arena, Planet Namek, Cell Games Arena, and Rocky Field - all make great use of parallax scrolling to create a sense of depth, and some feature flashy stage transitions or finisher animations. In one match, I was able to get Goku to Kamehameha-blast Vegeta clear through a mountain on Rocky Field, transitioning us to a grassier region (with nary a loadtime in sight), while a KO-by-super on the Arena stages sends opponents careening into a nearby building, which glimmers in the distance as hundreds of windows shatter in unison.

There are also fantastic references to the source material woven into the animations themselves. If you hadn't already heard, many of the moves are 1:1 recreations of panels from the original DBZ manga, and there are also some great lore callouts. For example, Android 18 typically summons Android 17 during one of her super attacks - but if Krillin's also on her team, the couple will team up for the animation instead (complete with Krillin firing a different colored beam). As with the exceptional presentation of Guilty Gear Xrd, the transitions between the fast gameplay and fluid cutscene-style attack animations are flawless, even when massive explosions cover the screen as in Android 16's three-bar, one-hit-kill grab super (which the movelist amazingly calls 'The Final Power that shouldn't be used'). If there's any aspect of FighterZ's stellar presentation that could use a bit more polish, it's the stilted, puppet-like lip sync that carried over from Guilty Gear Xrd. I also didn't encounter any unique, Street Fighter 3-style before-the-fight intros between deeply connected characters, like Gohan going up against his biological father Goku or his adoptive dad Piccolo - though I'm hopeful that those can be added in later.

All-in-all, Dragon Ball FighterZ is shaping up to be a fantastic tag-team fighter that should be approachable for players of all skill levels (provided you're not simply watching the action in awe as an enraptured spectator). Dragon Ball FighterZ hits the PS4, Xbox One, and PC in February 2018, but closed beta signups are open now for anyone (like me) who can't wait to make these legendary warriors duke it out again and again.

Read more: Dragon Ball FighterZ is beating Marvel vs. Capcom: Infinite to a pulp, as far as Twitter is concerned