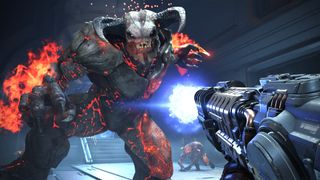 2020 is all going to hell in a handbasket because we'll finally get our hands on Doom Eternal. The next gory episode in the iconic shooter was revealed at E3 2019, and it's set in a literal hell on Earth. Our hero Doomguy is going to be well equipped for his new destination with new weapons like a ballista, a new arm blade, and a meathook addition to the Super Shotgun. If that hasn't got your trigger finger itching, then how about the fact that - according to creative director Hugo Martin - there will be twice as many demons in Doom Eternal as we saw in the Doom 2016 reboot?

There's also a new multiplayer Battle mode that looks metal AF, and true believers can get their hands on a collector's edition with a life-sized wearable Praetor helmet. Want a release date, more gameplay footage and details? Read on below to find out everything you need to know.

Doom Eternal was originally scheduled for November 22, 2019, but thanks to demonic interference (or maybe some last-minute development tweaks) the game was delayed until 2020.

An update on DOOM Eternal: pic.twitter.com/2LWrfh6e4ZOctober 8, 2019

The first Doom Eternal trailer is literally Hell on Earth

The demonic destruction of Doom won't be limited to Mars (and Hell) any longer. Doom Eternal takes place at least partially on Earth, as teased in the above trailer and confirmed by the developers themselves at Bethesda's E3 2018 press conference. That, initially at least, follows the narrative progression between the original 1993 game and Doom 2.

The single-player campaign looks like a hell of a lot of fun and will be meatier than the last Doom. "It's definitely bigger than Doom 2016, longer," executive producer Marty Stratton said at Quakecon. "I think the way we're challenging players will probably make it play a bit longer. My guess right now is it's in the 18-22 hour range on a pretty complete playthrough."

We also got a hint that the game will feature some sort of hub - check out the video above - where we'll see a different side of Doomguy.

You'll see kind of, like, where he hangs out," teased creative director Hugo Martin. "Again, if you care. You'll see how he spends his free time, and you'll learn a lot about him through the game, if you look for it and pay attention."

Doom Eternal comes with a new 1v2 multiplayer mode called Battlemode. In it, two player-controlled demons will take on a fully kitted out demon slayer in a strategic, competitive fight to the death. You can play as a variety of different demons who all have their own unique movements, attacks, and abilities, to offer up lots of different playstyles.

"There's no meta, there's no real strategy there," Martin told our sister site PC Gamer when speaking about the changes made since 2016 Doom. "It's just like, my thumbs are better than yours. But when you can overcome someone's twitch skills with strategy and teamwork, that means now there's a meta that emerges, and [Battlemode] is loaded with metas."

As demons, you can even summon AI demons to help take down the doom slayer and give yourself the upper hand on the battlefield. Demons will have to strategize to emerge victorious, while the doom slayer will have to put their skills to the test to be the last one standing. Watch the trailer above to see the multiplayer gameplay in all its fast, frantic glory across three rounds, and plenty of different arenas to test your mettle in.

The presentation ended with the unveiling of a collector's edition. As you can see  above, the edition includes a life-sized wearable Preator helmet, two digital soundtracks, the Year One pass with two story-based expansions, a lore book, and an exclusive steelbook. A demon slayer's skin and lithograph complete the edition,  but let's be honest - the helmet is star of the show here.

You might be forgiven for thinking that Doom 2016's fast, frenetic, utterly freeform gameplay might be impossible to top in terms if hectic, gratifying, FPS expression. You could be forgiven, but you'd still be wrong. Because Doom Eternal gameplay is going to blow the walls off its predecessor.

The first key change is the addition of the Meathook, a grappling hook attached to Doomguy's Super Shotgun. Launching him toward any demon at breakneck (theirs) speed, it's a staggeringly powerful and kinetic way of closing a gap of any size between yourself and your next target. No longer will you need to wait more than a second or so before getting right up in the face of your next quarry, and that also means that, ye gods, Doom Eternal's arenas can be a whole lot bigger.

Combat areas are now absolutely cavernous, taking in huge amounts of verticality and increased architectural complexity, heaving with far more demons than we've ever seen before. Doomguy, in response, is now Spider-Man with a rocket launcher, able to fly, swing, leap, and slingshot his way around like a 300lb circus performer with only blood on his mind.

Doomguy came charging into E3 2019 armed with shotguns, shoulder-mounted flamethrowers, two-chain glory kills, and some new moves; such as double jumps and dashes. Every weapon has a purpose, every enemy is different, and resources are still a big part of being the fastest, most effective demon slayer around. We'll constantly face new challenges on the battlefield with new types of demons and bosses thrown into the fray, too. Coupling the Meathook with a whole load of new acrobatic abilities (he can now climb, wall-jump, and swing from overhead pipes), we're potentially looking at one of the most mobile, aggressively open-ended shooters ever envisioned in Doom Eternal.

We first learned at Quakecon 2018 that Doom is no longer satisfied with keeping narrative in the background. It's unlikely that story and character development will ever remotely get in the way of the slaying, of course - Doomguy is Doomguy, and that's all you need to know - but Doom 2016 contains a surprising amount of oblique, Dark Souls-style background storytelling, and Doom Eternal is going to bring that into the forefront. During Bethesda's E3 2019 showcase, Stratton revealed an entire Doom universe is being built for you to traverse through, and every decision you make will really count as you make your way through the demon hordes. You’ll be taken on a crusade across dimensions to locations never seen before in Doom to save Earth, which is on the brink of annihilation. During Quakecon 2018, the gameplay trailer showed Doomguy heading through a facility on Phobos, harking back to the original 1993 Doom's first level. Now we see  the doom slayer work his way through Mars and even heaven to save the overrun planet from being destroyed. The dimension-hopping story promises to be bigger than ever before.

Want to know more? Be sure to check out our Doom Eternal preview from E3 2019.