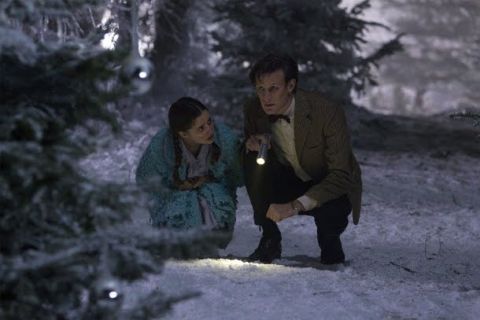 15 non-spoilery thoughts on the Doctor Who Xmas special

SFX was at last night's preview screening of "The Doctor, The Widow And The Wardrobe", this year's Doctor Who Christmas special. Here are our first impressions - they shouldn't spoil anything for you, but if it's not opening your present early then it's certainly giving it an exploratory shake...

The pre-titles sequence may just be the most audacious cliffhanger in Doctor Who history.

If I knew what the laws of physics were I could confidently say that it leaves them broken, sobbing and crying for Mummy Physics.

Listen out for references to no less than two Peter Davison era stories: one a direct wink to the fans, one possibly unintentional.

There’s also a call-out to Christopher Eccleston tale "The End Of The World".

What is it with this incarnation of the Doctor and taps?

If the Doctor ever gives you a present, it will probably take the form of a blue box. Well, naturally. Do not open it before Christmas.

Time Lord wisdom #2: There’s no such thing as foretelling.

It’s directed with style, filled with a fine sense of period atmosphere (think People’s Friend covers) and studded with memorable visuals: some moments feel folkloric, others trade in the kind of juicy juxtaposition that Doctor Who’s always been so brilliant at, colliding two realities together.

Cake mix: Enid Blyton, with a pinch of Douglas Adams, a sprig of Star Wars and perhaps a buried sixpence in the form of Jason And The Argonauts.

It lines up alongside The Green Death as one of Doctor Who’s more ecologically-minded stories.

You may even feel a pang of conscience as you look at your Christmas tree. Now that’s subversive, Mr Moffat.

Matt Smith delivers a smile that will smash your heart to pieces.

Doctor Who "The Doctor, The Widow And The Wardrobe" will be shown on BBC One at 7pm on Christmas Day.