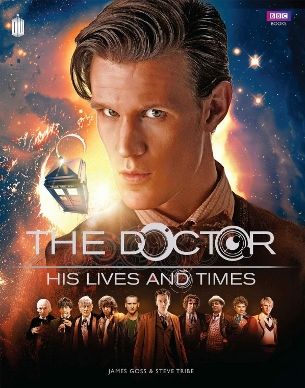 Doctor Who: The Doctor - His Lives And Times book review .

If you’ve read James Goss and Steve Tribe’s excellent A History Of The Universe in 100 Objects , or 2012’s aptly-named Doctor Who: The Brilliant Book , you’ll have a fair idea what to expect from The Doctor: His Lives And Times .

It takes a two-pronged approach, recounting each Doctor’s on-screen adventures through mocked-up documents and ephemera – press cuttings, posters, adverts - then addressing the behind-the-scenes story via an oral history, painstakingly stitched together from hundreds of (mostly old) interview quotes with cast and crew.

Diary entries, memoirs or letters by the likes of companions Susan, Sarah Jane and Tegan give an overview of the adventures, with the authors nailing the voice of the characters very well and dropping in some delightfully geeky in-jokes. Some of the “documents” are great, like a Tom Baker-themed spin on Da Vinci’s Vitruvian Man drawing; others feel a little tenuous (how would an invitation to the Doctor and Cameca’s wedding ever exist?). The interview quotes are well-chosen and assembled, although there is a little evidence of sanitising - not so much as a word on ‘80s script editor Eric Saward’s acrimonious resignation, for example.

But the real treats are the 33 boxouts dotted throughout the book, in which familiar names discuss aspects of the series. So, for example, we have Tim Berners-Lee (inventor of the worldwide web) discussing evil computer WOTAN; Sontaran actor Dan Starkey reviewing “The Two Doctors”; and new series scribe Tom MacRae confessing to crying at the death of a puppet rat watching 1988’s “The Happiness Patrol”. The only disappointment is that these contributions are all so short.

The most fascinating ones are those which see people from the old series commenting on the new. Seeing ‘60s script editor Donald Tosh fulsomely gushing about “The End Of The World” is strangely moving, and underlines what a uniquely rich heritage this show possesses.