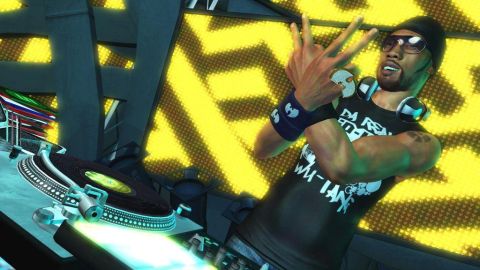 Like many real DJs who have spent countless of hours behind a pair of turntables with little to no fame or fortune, the DJ Hero franchise has struggled in the realm of fake plastic instruments to make a name for itself in music gaming. Guitars and drums are recognizable, friendly even, but a spinning turntable with some knobs? Not so much. So not only was it surprising when DJ Hero merited a sequel, but it was also great to see that the franchise was actually improved and fleshed out even more than its relatively solid predecessor.

Above: Freestyle sections are indicated by large rounded rectangles on the screen

For those not familiar with the DJ Hero franchise it essentially follows the basic mechanics of other instrument-based rhythm games like Guitar Hero or Rock Band. A turntable controller with a spinning platter and three color-coded buttons is your main method of mimicking the scratches and sound effects in each mix and a crossfader and effects dial are used in more advanced techniques.

One of the major improvements that has greatly increased the replayability and fun factor is the inclusion of freestyle sampling, crossfading and scratching during certain segments of each mix. Each mix in DJ Hero 2%26rsquo;s playlist includes areas where you%26rsquo;re given a free-for-all in one of the abilities taking you one step closer to a world-renowned turntablist. The game boasts that you can change the sound of your scratching during these freestyle sections by manipulating speed as well as using short and long moves, but either they have to be wildly different or each section has a specific sound because I didn%26rsquo;t notice a difference. I took entirely too much pleasure in throwing in the air horn sound effect whenever I could during Major Lazer%26rsquo;s %26ldquo;Pon De Floor%26rdquo;, but you%26rsquo;ll find that experimenting with crossfade freestyling can lead to really interesting results musically. Don%26rsquo;t like the way Kanye rhymes in %26ldquo;Love Lockdown%26rdquo;? Then use the crossfade freestyle section to remove his vocals altogether. Although it%26rsquo;s unclear as to how you%26rsquo;re scored (the game lists it as how creative you are) these sections do add to your final total at the end with a letter grade.

The battle system either via online multiplayer or through two turntable controllers has been expanded upon as well. Now, players can effectively steal sections of songs and lock another player out if their timing is better than their competitor. When this happens your competitor is left on the sidelines to cry and wait their turn while you grab the spotlight (and more points). Single player battles are introduced during story mode (now called Empire Mode) where you%26rsquo;re pitted against famous DJs and their own mixes. Yes, you%26rsquo;ll finally be able to boast to anyone anywhere that you beat DJ QBert in battle and not be completely lying.

Above: DJ QBert at a recent DJ Hero 2 event in San Francisco. He makes more money during a 30-minute performance than many of us do in a month working full-time

Multiplayer in general is a lot more interesting and, with the price of a standalone turntable slightly more affordable than before, it might be easier to get a friend involved with DJ Hero 2. While the original DJ Hero boasted the ability to hook up a Guitar Hero or Rock Band guitar for certain songs to play along, DJ Hero 2 has removed that feature and instead added vocals to a large majority of their playlist. While this seems more fitting, you%26rsquo;ll find that singing what are essentially mashups can be hilarious when it%26rsquo;s fun and maddeningly frustrating when it%26rsquo;s not. The novelty of singing two entirely different songs almost simultaneously will wear thin very quickly and, while the effort is appreciated to include more people in the game, it will probably be something you won%26rsquo;t utilize very often.

As a party game, however, DJ Hero 2 doesn%26rsquo;t disappoint. Stick the game on Party Play and a continuous mix of music will play where you canjump in and out without failing the song. The one thing that has consistently shown in DJ Hero is the music and its successor definitely does not disappoint. Like the original game, you%26rsquo;ll find yourself surprised by the creative mashups that are presented and the series has always been really good at staying current while still including past favorites that keep the momentum going. The inclusion of new DJ superstars like QBert, Diplo and A-Trak with their original mixes will also help appease hardcore turntable nerds as well.

While the turntable may never be as ubiquitous as a guitar, DJ Hero 2 continues to push the boundaries of music gaming and improves upon the original with features that make the game more lifelike than before. Beyond that, the music is what will draw you in and keep you playing, even if you aren%26rsquo;t familiar with turntables or DJ culture.