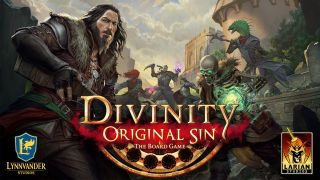 Our Divinity: Original Sin board game preview had everything you'd expect from a tabletop RPG. Plastic miniatures. Oodles of tokens. Multi-colored dice. Hundreds of cards. So how does it stand out? With something a lot of the competition doesn't share - personality. Overseen by the minds behind Divinity and funded through Kickstarter, this spin-off is as quirky as it is ambitious. And I can't wait.

In the end, it all came down to a squirrel. You see, we'd been told by our host from Larian Studios - developers of the Divinity series and Baldur's Gate 3 - that clues about a location were hidden in a card's artwork. Considering the enormous deck currently strewn across the table, this sounded too good to be true; the game already creaked under the weight of branching narratives and perks like the one that allowed our party's mage to talk with animals. So when we spotted a squirrel tucked away in the corner of a woodland painting, we thought we'd put it to the test. Would our mage be able to chat with it, or was it mere set-dressing? There was no tenser moment in our Divinity: Original Sin board game preview than when we flipped the card to reveal... a squirrel who was so pumped we could understand it that it gave us a sparkly new hat and info on the dangers that lay ahead. It's a good example of how layered this Divinity spinoff is. I wasn't sure how it would differentiate itself in an already-crowded market, but now I suspect it'll be a match for many of the best board games out there.

That's because it isn't a board game about dungeon-crawling. Not entirely, anyway - that's just one part of it. Much like the best tabletop RPGs, exploration and the choices you'll make are every bit as important as combat. In fact, a good way to describe our Divinity: Original Sin board game preview would be 'D&D lite'. The characters we chose had backstories, classes, and skills that blossomed in new directions as we levelled them up over the course of our adventure. Unlike Dungeons and Dragons, though, you don't need a Dungeon Master to oversee everything. Instead, you'll find out what happens next by reading from location cards or a special booklet when prompted. This keeps things pacy and immediate.

You'll also be able to shape the world through choice and consequences. As an example, certain choices in the preview version led to an attack on the local town that changed the landscape figuratively and literally. These decisions are noted down via the Chronicle System, a way of tracking everything you do over the course of this multi-hour journey. It's similar to the Legacy mechanics seen in Gloomhaven and some editions of the Pandemic board game, yet there's a key difference; namely, you can reuse everything in the box. Most Legacy products ask you to mark or destroy components after they've been used, but Divinity allows you to rerun scenarios as often as you like. What's more, your choices can then be sent in to the game's designers. Much like a Telltale game, this allows them to track how many people made a specific decision. That information then inspires future updates, meaning you'll "impact not just your own story, but the future of the Divinity: Original Sin universe".

Your first decision is figuring out where your party will go next, and when. Contrary to what you might expect, the result matters. Some locations have a time limit that forces you to split up or miss out, while others act like dominoes by triggering effects elsewhere. For instance, our group's rogue decided to explore the field near a bandit camp because it'd provide a better vantage-point. What we didn't anticipate was getting the drop on hidden enemy reinforcements with the same idea. Had we not taken them out first, they would have overwhelmed us later on when we attacked the camp itself.

Being rewarded for planning ahead like this helps Divinity seem more responsive - progress isn't limited to arbitrary chance or dice rolls. Like all the best coopertative board games, this results in fun discussions/arguments about the best course of action.

The game's combat is equally layered. In fact, it has more in common with the video game than you might expect - the similarity was something everyone playing commented on at one point or another. Although damage is decided by a handful of dice, effects are stackable. Warriors can shatter the armor of foes so they take damage more easily. Mages are able to cover foes in oil that can then be set alight. Rain spells put those fires out. It's fun to mix and match, taking what could become stale over a few dozen hours and keeping it fresh. In the same vein, each player can use Source tokens to retake failed rolls… but doing so may attract horrendous demons pulled straight from your nightmares.

In addition, friendly fire is definitely an option. Let off a fireball and allies near your target will also go up in flame. Because would this even be a Divinity game without accidentally making your friends explode? Don't worry about it spoiling things, though. This mechanic tips you headfirst into misadventure and desperate hail Mary scenarios where saving the day means knocking out a buddy (and by this I mean 'set them on fire'). It's memorable and frequently hilarious.

That's why it's worth keeping an eye on the Divinity: Original Sin board game in the coming year. Although there are a lot of cogs and wheels grinding behind the scenes, the end result is seamless and engrossing. And hilarious, which is probably what'll get me coming back over and over again once it launches in late 2020. Fall can't come fast enough.