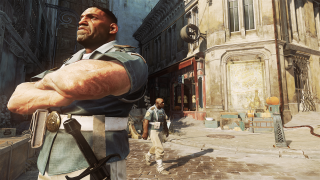 There’s an old saying that goes, “Be kind, for everyone you meet is fighting a hard battle.” This quote is often misattributed to Plato, but is thought to have actually come from a Reverend John Watson (under the pen name Ian Maclaren) in the 1800s. Meant to encourage empathy and remind you that other people are complex beings, it’s one I could remember more often.

In Dishonored 2’s alternative 1800s, your protagonist – either Empress Emily Kaldwin or her father and Royal Protector, Corvo Attano – receives a visit from the supernatural Outsider, who hands over a magically adapted human heart that asks: ‘What if we could know the details of each one of those personal battles?’

The Heart, carried in your chosen character’s left hand, helps to locate hidden runes and bone charms that you can use to upgrade their skill set. Get close to one of these magical objects and the Heart will beat, getting faster as you move closer. We’re used to hearing our character’s heartbeat in horror games, but this is stranger, in keeping with the grotesque world that Arkane has crafted. But my favourite thing about the Heart is a less functional feature: the way that it whispers when you give it a squeeze.

Sometimes, the Heart will whisper general statements that tell you no more than you can already see: “This city is a place of riches. But not all get a seat at the banquet table.” But point it at a person, and it will whisper their secrets. Named characters get several squeezes, a more interesting way to learn backstory than to read an entry in a codex. But even nameless citizens, such as guards and beggars, get a line. “He was beaten in his youth. The bone in his jaw never set right. Yet he refrains from mistreating others.”

These snippets have mixed effects. It makes nameless NPCs seem more real, until you reload and use the Heart on the same person only to find that the whispers are randomly assigned. Sometimes these secrets seem at odds with how the person appears from what they say to you or what you overhear them saying to others, but I suppose that’s true to life.

Since this is Dishonored, the whispered secrets are weighted towards the bad. For every person who “sings to get through the day”, there seem to be five who’ve committed murder. I don’t like what this suggests about the fundamental nature of human beings, but I do like how it makes it much more tempting to forgo mercy and just dismember these awful people. And it does make the occasional nice secret more moving; given the evil deeds of those around him, it’s good to find a man who “raised the child on his own, even though he knew otherwise.”

I play as Emily, and these whispered truths make a stark contrast to her occasional comments. “It’s a new thing, needing money,” she says, as she enters a world populated by people who can’t afford to keep their children alive. As I squeeze the Heart at every opportunity, I imagine Emily totally overwhelmed by what she’s learning yet unable to stop herself from looking closer. I imagine her desperate to use this magical aid to figure out if there’s anyone she can trust.

Of course, when you play as Emily there’s an additional layer to the Heart: the spirit within is that of her mother, Jessamine Kaldwin. This hits you when the Heart speaks in the first person: “You ask too much of me – to look into his perverse soul. Too much.” And it wrenches at your own heart when the voice of Jessamine tells Emily her regrets: “What I wouldn’t give just to hold your hand in mine one more time.”

Towards the end of the game – spoilers ahead – the spirit of Jessamine does get to hold her daughter’s hand, as Emily is forced to release her. We can gather from some of her whispers – “I am tired. How long, my dearest? How long must I endure in this shadow state?” – that Jessamine is happy to leave this world, but presumably it means that any sequel won’t star the Heart, at least not with the same spirit inside. Still, I’m grateful that it made its way into a game at all, and that it gave me cause to wonder: what would the Heart have to say about me?