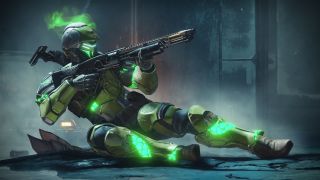 Nobody really knew what to expect from Destiny 2's annual pass, but after the growing pains of the Black Armory, expectations were both clearer and a bit higher going into Destiny 2: Joker's Wild. To its credit, Joker's Wild avoided the hurdle that initially tripped Black Armory by giving annual pass owners Power Surge bounties, which ensure their Power level is high enough to enjoy the new activities, namely The Reckoning (a new timed horde mode). Joker's Wild has definitely gotten off to a better start than Black Armory, and while I'm worried its premier activity will get old fast without some much-needed balance changes, I haven't been this into Destiny 2's story since Forsaken first launched.

Joker's Wild is all about the Drifter, his beloved Gambit, his iffy relationship with the Vanguard, and his ties to the mysterious Nine. Gambit Prime, an expanded version of Gambit with new maps, tougher enemies, special role-defining armor, and shiny new weapons, is obviously a big part of that story. It's also the backbone of the DLC's main loop: play Gambit Prime to earn Synths, use those Synths to craft Gambit Prime gear in The Reckoning, then take that gear back into Gambit Prime.

The Gambit Prime weapons are nice, but the armor is the headlining act. By equipping multiple pieces of the same Gambit Prime armor set - with each piece contributing points to your set bonus - players can gain special skills tailored to four roles: Reaper, Sentry, Collector, and Invader. Simply put, Reapers kill enemies, Sentries kill Blockers, Collectors bank motes, and Invaders kill the other team. Their respective skills give Gambit Prime more depth than traditional Gambit, and the armor they're attached to is a tantalizing reward. I decided to play Sentry because handling Blockers and dueling with Invaders is My Jam, and I've had a lot of fun chasing ideal rolls on specific armor pieces, choosing the right Exotic to fit my role, and experimenting with splashing in skills from other roles like Reaper and Collector.

Not quite ready for prime time

The Gambit Prime armor loop isn't without its problems, though. For starters, the process of grinding an armor set is weirdly wasteful. Gambit Prime armor comes from The Reckoning, which is split into three tiers. Tier one opened on launch day, tier two came shortly after, and at the time of this writing, tier three is still unavailable. Armor from tier one gives one role point apiece, tier two armor gives two points, and tier three gives three points. You need a full set of tier three armor to get all the skills for your role, so you're never going to wear anything else. In other words, once the third tier of The Reckoning unlocks and tier three armor becomes available, all the armor players have already crafted will become worthless.

Why isn't there a way to upgrade Gambit Prime armor and bump it up to the next tier? Without that option, it would've made more sense to hoard all my Synths and ignore The Reckoning until tier three was available. I should be excited that a new tier of The Reckoning is opening up; instead, I'm frustrated because I wasted a lot of Synths on tier one and tier two armor that I'll never use again. If nothing else, let me break down low-tier armor to get some of my Synths back. I don't want to ignore The Reckoning for the sake of efficiency. It's a fairly simple shoot-the-dudes horde mode, but it's still a lot of fun to rip through waves of enemies in Destiny 2, and quite frankly I could do with the break from Gambit Prime.

Gambit Prime isn't the staggering reinvention some players were hoping for. It looks and plays almost exactly like normal Gambit: kill enemies, collect and bank motes, Invade when possible, and then melt the Primeval boss at the end. That might change once everyone's decked out in full sets of tier three armor, but for the most part, it's more like Gambit 1.2 than Gambit 2.0. The maps - at least the ones available so far - are more varied, but they still feel similar. The Destiny 2: Season of the Drifter ViDoc made a big fuss over the new Primeval mechanic, but that turned out to be "kill three Envoys instead of two and then stand in a clearly marked location". Worst of all, the same issues that make Gambit so frustrating are still around.

Heavy ammo is both too plentiful and too inconsistent in Gambit Prime, and coupled with the laughably absurd range and PvP damage output of machine guns, this totally undermines the Invader system. Solo queuing in Prime is even more of a nightmare not only because it makes it difficult to play to the role you're geared for, but because you run the risk of playing against a well-balanced team while you're stuck with three Invaders with useless armor perks. Then there's the Gambit Prime armor itself. I'm thrilled to see armor set bonuses in Destiny 2 and hope to enjoy more of them in the future, but some of the Gambit Prime sets feel grossly underpowered compared to the rest.

The Sentry set, for example, has a starter perk that literally doesn't work and a final perk that does next to nothing. The first perk is supposed to increase the damage I deal to blockers, but it quite provably doesn't, and the final perk buffs my team's resilience, mobility, and recovery while attacking the Primeval - you know, when we're standing still. We're standing in the same place and nothing is even attacking us - what do we care about mobility and recovery? I already regret grinding for tier two armor; please don't make me regret wanting to play Sentry, too.

The joker is wild

Does Gambit Prime have its moments? Absolutely, especially when you're playing with friends.  But if it's going to carry Joker's Wild for the next three months, Gambit Prime is going to need some balance changes, and they can't come soon enough. Luckily, there's more going on in Joker's Wild than just Gambit Prime and The Reckoning. The DLC's also thrown a promising story rift into the mix through a new Allegiance Quest that asks you to side with the Drifter or the Vanguard. The quest is quick to point out that your choice will have permanent effects on the story and content you experience on that character - in an almost Telltale-esque 'The Drifter will remember that' kind of way - and it's exciting to see that kind of branching storytelling in Destiny 2.

That's to say nothing of the brilliant "Narrative Preview" short stories exploring the Drifter's seedy past and questionable motives, or the cryptic messages which a Warlock named Aunor delivered to players via the in-game Postmaster. I didn't give a half ounce of glimmer for all the lore in Destiny 1, but I pored over those short stories like they were a treasure map, and Aunor's messages drew me in like Destiny 2 hasn't since the death of Cayde-6 in Forsaken. I checked the Postmaster in a frenzy every time I logged on, eager to see if he'd sent another message. Joker's Wild doesn't even have a campaign, but I'm dying to see what happens next.

Outside of the Allegiance Quest, I've enjoyed the grind to unlock the long-awaited Destiny 2 Thorn, and I'm eager to start the Invitations of the Nine - previously known as Xur bounties - on March 15. New events are also on the way, the most promising being the distinctly Dawning-esque Revelry event coming later this spring. All that stuff looks great and will hopefully keep Joker's Wild going while Bungie sorts out Gambit Prime, the promising but flawed centerpiece of the DLC. The good news is that if Gambit Prime does dramatically improve, normal Gambit should also benefit from those improvements. Maybe then the whole Gambit PvPvE ecosystem can finally become the "something for everyone" smorgasboard players have always wanted it to be.