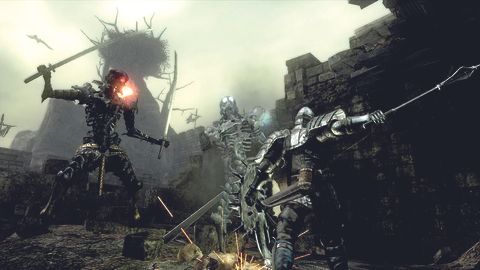 The good news is that the controls are tight, responsive and intuitive. When you eventually learn how to take on each situation, there’s a tremendous sense of power and reward in everything you do. Enemies leap at you, and you can trick them into throwing themselves off bridges. Groups of monsters rumble towards you, and you can roll into the thick of them and in one swipe take them all down, then roll out of the way of an oncoming projectile.

For every one of these large-scale battles, there are equally epic one-on-one melees that play out like the final scenes from Return of the Jedi. You really have to try and learn what the AI is doing to survive, and the payoff is knowing that you really did out-do them. This isn’t a game for the faint-at-heart – it’s for dedicated aficionados.

From Software has made a twitchy, utterly skill-based RPG that requires you to analyse and approach every situation differently. Eventually you become a killing machine, expecting death at every corner, and not letting up until everything around you is six feet under.

It’s a long game, too. There are over 12 different levels, and each one has certain parts that require you to return later. At one point during the first level, you turn a corner and face off against a huge knight with bulging red eyes. If you’re the type to turn tail and run, you can survive his initial strike for the first five hours.

It’s graphically stunning, too, looking more like the old Ultima games than anything that’s ever come out of Japan. You won’t find cat-girls, effeminate heroes or happy endings for the most part. This is a demure, slow and rewarding game that harks back to generations long past, but with the graphical sheen and tight controls that you’ll both thank and curse.

For every moment we spent screaming at our TV and throwing our controller we had four moments of awe. Demon’s Souls is the scrappiest, hardest and best RPG released so far on the PS3 – and, in our opinion, it’s one of the best we’ll see on any console this generation.