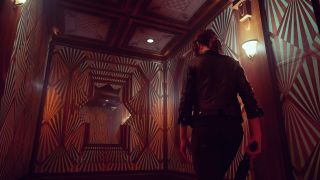 Control shouldn't exist. Now don't get it twisted. I recently had the opportunity to play through the first four missions of the game and it only served to confirm a long-held suspicion: that Remedy Entertainment really does have something special on its hands with Control. All I'm opining here is that it's easy enough to imagine a world in which Control is little more than a high-concept discussed between old colleagues, rather than one of 2019's most exciting and ambitious action games; a 'one day' dream shared between creative leads Sam Lake and Mikael Kasurinen on long nights spent negotiating terms and revisions with Microsoft on prospective sequels to Alan Wake and Quantum Break.

Had the former shifted just a few million more copies in its launch window, it's likely that Alan Wake 2 wouldn't have languished in pre-production and sent Remedy down a different path. Had Quantum Break not been subjected to a famously contentious development cycle, perhaps enthusiasm for continued adventures in Riverport University would have been there from both developer and publisher alike. Had either of these realities come to pass, Remedy would likely be locked into a cycle of sequels under the purview of Microsoft Game Studios. Instead, we have Control.

I'm not sure that I necessarily subscribe to the concept of 'fate', but I can now say quite unequivocally that I'm glad that we are receiving this supernatural action game rather than a sequel to either of the aforementioned. For me, Alan Wake and Quantum Break are two of the defining action games of the last two generations, but I believe that chasing sequels would have ultimately been reductive to Remedy. Control really is our chance to see what this team can achieve when it is free to create without restraint.

A point to prove

To that end, Control feels like a game specifically created to prove a point that didn't need to be made. That isn't a criticism of it – or of a studio that has poured so much of its energy and enthusiasm behind Control across its three years of development – but rather the strongest endorsement I could possibly hope to make on its behalf.

This is the first Remedy game to come to a PlayStation platform in 16 years, since 2003's Max Payne 2: The Fall of Max Payne. As much as Control dazzled in small play-session opportunities, I had often wondered whether this was all smoke and mirrors. That perhaps Control would normalise itself outside of its big showcase set-piece moments that have been shown publicly in the last year. I had wondered whether Remedy would need to work modestly as it attempted to realign itself with a broader ecosystem of players as it took back control of its destiny, and as it attempted to take the Northlight Engine – a proprietary foundation specifically engineered to power Quantum Break and harness the (shall we say) unique architecture of the launch Xbox One – and stabilise it for a broad array of platforms. Control is Remedy's way of proving that we haven't seen anything from it yet.

Unless something goes horribly, horribly wrong after the first few hours of the game – and I'd be surprised if this were the case, given the studio's track record – then I feel confident in claiming that Control is the culmination of everything Remedy has gained expertise in and has been working towards since the company was founded 23 years ago. Control may have its roots in Remedy's past, but it absolutely represents its future – its action unfurling on a scale the likes of which we've never seen from this team before.

This game, from the second it starts, is unashamedly strange. Control is eager to lead players astray through a continual barrage of esoteric concepts that underpins the game's approach to narrative and world design, with a dream-logic mysticism helping to fuel the particulars of its combat and spatial navigation. Control can do this, because Remedy knows full well that you will cling onto the experience for dear life once it captures your attention. Because how could you let go of something as captivating as this?

Even if you're lost in the strangeness of this singular creative vision, the mechanics of its movement and gunplay are far too refined to ever be put down – I had to have the controller practically torn from my hands after my time with the game came to an end. The animation is at once responsive and fluid, a remarkable step up from the impressive work showcased in Quantum Break; the density of the detail found in the full-body motion and audio capture in Control is astounding, doubly so when you remember that Control doesn't have a Microsoft budget behind it. The AI is challenging and chaotic, with Control transforming into an aggressive and energetic game of cat-and-levitating-mouse as soon as enemies begin to spirit themselves into a scene. I could go on and on like this. Instead, I ask that you trust me when I tell you that the systems that underpin Control provide a solid foundation for the type of high-octane experience the studio is renowned the world over for engineering, with the attention to detail helping to usher it onto another plane entirely.

Would I love to one day have another adventure in Bright Falls, following Alan Wake through yet another nightmare of his own design? Absolutely. Would I love to see a Quantum Break sequel that expands on the particulars of Beth Wilder that were ultimately expunged from the original game – a trip through the twisted hellscape of a world frozen by the breakdown of time that were hinted at in the game's closing hours but never properly realised? Absolutely. But would I want either of these rather than Control? Not on your life.

Still, if you're longing for the company of Alan Wake then you'll no doubt be happy to find that Matthew Porretta is on the scene as Dr. Casper Darling, appearing in found-footage videos to explain away some of Control's stranger concepts. The voice of Max Payne and Zachariah Trench is in there as well, with James McCaffrey appearing frequently to you throughout the adventure as a FMV projection of the departed Director Trench. As for Beth Wilder, well she's there in spirit with actor Courtney Hope starring as Control's lead Jesse Faden – a commanding performance that I imagine we will be talking about for some time to come.

I'm yet to see any evidence of the face of Max Payne appearing just yet, Remedy's own Sam Lake. The creative director has a tendency to make sweeping cameos in his studio's games and believe me, I spent a lot of time looking. Still, I did find radio station segments of America Overnight that can be heard throughout The Oldest House, detailing all kinds of phantasmagorical phenomenon occurring out in the wider world that immediately made me feel like I was back in Bright Falls – listening to KBF-FM 97.6 and the dulcet tones of host Pat Maine rather than pressing ahead with sorting out Alan Wake's midlife crisis.

There's the charmingly hokey videos and voice recordings that explain away the Altered World Events and Objects of Power at the heart of Control's weirdness, making me at once recall hours spent crawling through Quantum Break's corridors for collectibles. Oh, and there's the unnervingly bizarre in-game television show that I stumbled across in my thorough exploration of the game's opening spaces – and had to promise to detail no further than this. Folks, I want to talk about this damned TV show.

Anyway, I digress; what I'm trying to say is that I get the sense that Control feels like a wonderful extension of everything that Alan Wake, Max Payne, and Quantum Break achieved. That this game could exist as a part of any of those worlds – or all of them, should they be connected, as Remedy has been known to tease over the years. I'm trying to say that Control is a unique production with a clear heritage, a strange game releasing in a time where big-budget releases so infrequently dare to surprise or challenge in any substantiated way.

It may only exist because Alan Wake 2 was a non-starter. Or because the future of Quantum Break is in the hands of a publisher attempting to get its house in order ahead of the next generation. Or because Remedy feels that it has a point to prove – that it likes to make games that are weird and that there's nothing anybody can do to stop them. Whatever the reason, I'm glad that Control exists and I'll be calling in sick to work – don't tell my boss, please! – to play it come August 27, 2019. Join me, won't you?