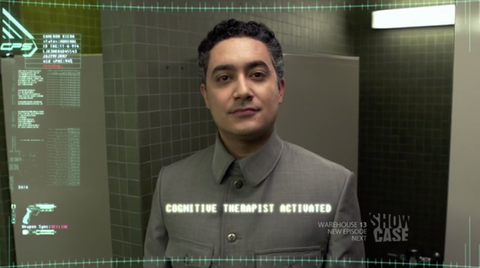 THE ONE WHERE Kiera is feeling maudlin because it's her son's birthday – so much so that her CMR chip triggers a hologram psychotherapist to talk to her through it. It's also a tough day all round, because internal affairs has launched an investigation into the precinct's dealings with Liber8... and somebody's been naughty!

VERDICT BETTY, NOOOOOOO!!!!! Talk about an unexpected twist! Betty's betrayal in the final scene is like a giant kick to the goolies. What on Earth has she been up to? How did she get involved with Lucas? How long has this been going on? OMG! Then again, it's about time Jennifer Spence got something meaty to sink her teeth into, given that Betty's been a constant presence throughout the series but only rarely gets more than a few lines per episode. We can't wait to see what she gets up to next, the double-crossing scamp! And hey, at least we know who the mole is now...

The revelation about Betty is this episode's big moment, true, but Inspector Dillon's sudden and disturbing sacking shakes things up as well. Will he return? Dillon doesn't strike us as the kind of guy who'd give up on his career and start playing golf, so hopefully he'll manage to sneak his way back into the job before too long. What's rather lovely is that Kiera follows him to his car and asks, “What can I do to help you?” She's all about the practicalities, is our Kiera, and it says a lot about the respect she has for her “boss” that she doesn't come out with sympathetic platitudes, only an offer to help. If anybody can get Dillon back in command, she can. Fingers crossed.

Other than these two twists, the rest of the episode is a bit of an uneven mix, veering between Kiera being upset about her son and the team of investigators being panto-villain nasty. Somehow Agent Gardiner has descended into becoming a snarling, hissing baddie with all the dimensions of a crisp, while the lead investigator asks so many personal questions of Kiera that it comes off as vicious rather than a professional investigation. This was obviously the intention (and ties in neatly with Kiera having a bad day), but when Kiera is provoked into attacking Gardiner and yet ends the episode without so much as a slap on the wrist, it beggars belief. From a high-priority suspect who's attacked an agent, to a totally innocent woman in such a short space of time? Hmm...

Still, the attack does trigger the hologram – Battlestar Galactica 's always dependable Alessandro Juliani – and thus Kiera gets to have the emotional breakdown that's been looming since episode one. The show really couldn't have Kiera grieving for her family right from the get-go without becoming miserable and maudlin, and so this is the perfect way of showing that she's bottled up all her pain until it just had to come out. Rachel Nichols delivers a solid performance as a grieving mother; by the time she's dried her tears, the whole thing feels cathartic... for her and for us.

BATHROOM BREAK Kiera has a meltdown while sitting on the loo, finally losing her temper when she realises there's no more toilet roll to use (we can't actually see if she needs it to blow her nose or for other reasons, but presumably we wouldn't have seen her with her trousers around her ankles either way). Just when things seem to have reached rock bottom, a hand appears under the stall with some paper to rescue her. Not only is this funny, it's also amusing to note that while Kiera's super-suit is like a Swiss army knife in so many respects, it lacks at least one function: lavatorial assistance.

COOL TECH Fairweather, the pop-up psychoanalyst who provides a sounding board for Kiera to vent to, is a genius idea... although like all gadgets from the future, he has a sinister side. If he's not confident that Kiera can be fixed, he will delete her memories. That's one way to inject peril into a session on a shrink's couch! Gotta love how he walks through all the desks in the office, too, and the FX are fab. One thing, though – when he appeared, I half expected him to say: “Please state the nature of the medical emergency.”

PERSONAL TOUCH Kellog gifts Alec with a brand new base of operations with all the computers he could ask for. Love how he also put up a hopeful “Welcome Alec” banner, too.

NOT-SO-WILD-CARD The business card that Kellog hands to Alec is possibly the dullest business card in the world. A multi-million dollar business and that's the best you could come up with? Pah! Still, it will probably look amazingly swish in future versions.

INTERESTING WORKMATES Crazy time-traveller Jason teams up with Alec to work together, prompting what could be the weirdest father-son bonding session of all time. That's if Jason is Alec's dad, of course. We still don't know for sure... So many mysteries!

BEST LINE
Fairweather: “I do provide an authentic therapy experience.”

Continuum season two is currently airing in the UK on Syfy, Thursdays at 10pm