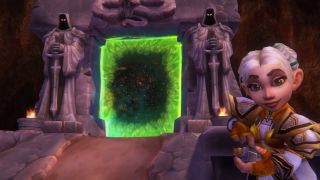 Last month, Blizzard launched its beta for World of Warcraft Classic, a legacy server which authentically replicates version 1.12 of the game from 2004. Its release follows years of fan demand for a vanilla emulation of the forever popular MMO, which has changed significantly over its 15 year lifespan, suggesting a genuine hunger for the purer, simpler WoW of old, but Blizzard's beta has already run into a curious problem.

Those with access to World of Warcraft Classic began to report a number of bugs and issues they encountered during their playtime. As it happens, these bugs aren't bugs at all, but original features that were part and parcel of the 1.12 experience, even if – to modern eyes – they feel antiquated enough to appear outright broken. Blizzard has even had to release a full, ever growing list of "Not a Bug" features which numerous players are complaining about, as a way to further clarify the confusion. As a case study for the pervasive power of rose tinted glasses, this analogy speaks for itself.

Nostalgia is a more powerful force in video games than in any other medium. Though all of us undoubtedly have fond memories of watching unforgettable movies, reading cherished books, or bingeing through epochal TV shows, video games allow us to make our own memories through play, and – because of their extended length and replay value – tether their experiences to specific seasons in our lives.

I love Battlefield: Bad Company 2 because it's a great game, but I also love Battlefield: Bad Company 2 because it defined my sixth-form years, where conversations with friends about our latest multiplayer exploits during the walk home from college would then lead to an evening of creating new Battlefield moments together online. But, as the World of Warcraft Classic fiasco shows, nostalgia also distorts our memory recollection more powerfully than we might like to admit; scientists are still trying to understand the extent to which it rewires our brain chemistry, leaving us aching for past fantasies over future possibilities.

In his groundbreaking 1992 report, Nostalgia: A Neuropsychiatric Understanding, neurologist Dr. Alan R. Hirsch's research found that nostalgia presents a "sanitized impression of the past", otherwise known as a "screen memory" which consolidates all of the positive emotions associated with a memory while filtering out any of the negative ones.

A World of Warcraft player's "screen memory" of Vanilla WoW, for example, is therefore more likely to be a highlight reel of its best bits (sauntering through Elwynn Forest, defeating Onyxia), with all the frustrating elements of the game (getting ganked, endlessly looking for raid groups) conveniently omitted. This would explain what happened with the recent beta, where players' screen memories of Vanilla WoW meets the true version of the game itself, resulting in a cognitive fallout that leads to a list as ridiculous as this one.

Indeed, going back as far as Ancient Greece, nostalgia has historically been perceived in medical spheres not as a warm, fuzzy feeling harmless to those who experience it, but as a form of mental suffering, and the phenomenon is still defined as a symptom of depression by the American Psychological Association today. This isn't to say that nostalgia is an aberrant blight upon the human condition (it's reported that we all experience the emotion at least once a week, after all), but it does highlight that fact that it's not always a reliable barometer for guiding our thoughts and actions.

With regards to games, then, the increasing deployment of nostalgia as a selling point for remasters, remakes, and legacy titles is suddenly viewed in a wholly different light. When we wax lyrical about how much better video games used to be, does that say more about the state of the industry or the state of our mind at the time?

Even so, as mentioned, scientists are still only scratching the surface of nostalgia's effect upon the mind, but there's more than enough evidence to reveal how the experience can improve our wellbeing and correlate into positive outcomes upon the real world. A 2012 report from the University of Southampton, for example, found that nostalgia can reduce feelings of stress, loneliness, and existentialism. "When we experience nostalgia", explains Erica Hepper, one of the co-authors of the report, "we tend to feel happier, have higher self-esteem, feel closer to loved ones and feel that life has more meaning. And on a physical level, nostalgia literally makes us feel warmer."

When we look at the example of games, this also makes a lot of sense. Returning to a game we used to love can unleash a euphoric cocktail of pleasant emotions, ranging from the immediate delight of hearing its instantly recognisable sound effects for the first time in years, to the pleasant surprise of reactivating the long dormant muscle memory that you had perfected as a child through hours of play. Just as nostalgia explains why we sometimes expected more from a remaster or legacy game, it also explains why we want to play them in the first place.

So what's the takeaway from all this? Are we supposed to just pretend like our gaming childhood never happened, and only save our excitement for new games and fresh IPs? Not all all. If you can't wait to relive your history with Crash Team Racing Nitro-Fuelled, that's great, and knowledge of nostalgia's manipulative power shouldn't have to rob you of that joy. What you can do, however, is approach these kind of titles with a healthy dose of caution to check the unrestrained excitement.

Like a subconscious hype man hiding in the back of your brain, nostalgia may have coated your memories in an idyllic varnish, leading only to disappointment when that screen memory is bulldozed into rubble by the truth. Simply being aware of this can make all the difference, allowing us to better appreciate games in the context of their time and place in history. Oh, and if you think you've encountered a bug, you're probably wrong.

Check out more of the biggest new games of 2019 and beyond, or watch the video below for a bitesize guide to the year ahead.