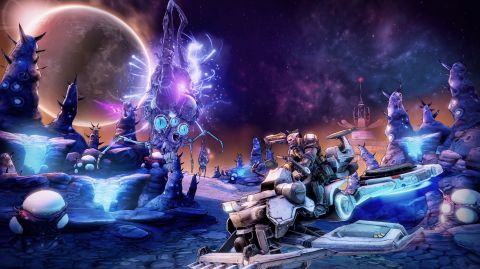 Remember Bioshock 2? Remember how many feared it would be a decent but unnecessary sequel, fun in its own right but bringing nothing drastically new to its storied heritage? That's Borderlands: The Pre-Sequel in a nutshell. It's a series of small refinements wrapped in a sub-par narrative, filled to the brim with gratuitous fanservice. And while that might be enough to placate Borderlands super-fans, casual players will find that things haven't changed all that much, and that's not enough to make up for its lacking story.

If you’ve played Borderlands 2, things will seem very familiar with The Pre-Sequel. You still run around huge open areas and small, enclosed corridors, only this time on Pandora’s neon, purple-tinged moon Elpis. You still shoot everything in sight, from moon-based bandits to nefarious space beasts, the game's core combat maintaining the series' weird, satisfying mix of anarchic, tactical gunplay and compulsive RPG overtones. And yes, tons of loot explodes out of your freshly exploded foes, ripe for the taking. It's a compelling loop of shooting and looting that--even after spending 18 hours completing the main campaign--I found myself drawn back into, ready to try out new characters and take on the much harder True Vault Hunter mode.

But while the series greatest strengths remain, the overall adherence to what has gone before also means that many of Borderlands main niggles are back as well. Loot drops so frequently that you’re constantly stopping to see if your new stuff is any better than your old stuff, and sorting through your inventory is still incredibly cumbersome. Co-op is far easier and snappier than single player, mainly because you don’t have anyone to revive you if you die while adventuring on your lonesome.

Sure, you can revive yourself with a well-timed kill, but it’s not always a viable solution, and several bosses late in the game will wreck your face without a second player to help out. Borderlands has always been a far more frustrating experience for people who choose to play it solo, and the Pre-Sequel does nothing to change that. Though to be fair Borderlands' class-based, co-op RPG leaning makes that more of a gameplay feature than a problem, And by definition, being the same as its predecessors certainly doesn't make the Pre-Sequel any worse.

A few additions have been made, but most of them feel very slight compared to the huge leap Borderlands 2 made from the first game. Functionally, the newly added laser weapons don’t handle much differently from using any other gun, and mook-freezing Cryo damage feels less a revelation and more like something that should've been in the series ages ago. While appreciated, these tweaks prove to be more of a refinement on the core Borderlands experience than any serious evolution in gameplay.

That said, the new control mechanics of dicking around the low-gravity moon of Elpis are awesome, ambient freshen-up. Shortly after starting the game, you’re given an oxygen tank (lovingly called an Oz kit by Elpis’ Australian-sounding inhabitants). Not only does it allow you to breathe in the vacuum of space, it also controls your ability to double-jump. There's an interesting risk/reward mechanic, in that you have to keep an eye on that O2 gauge to make sure you’re not jumping around willy-nilly, otherwise you'll suffocate like Arnold Schwarzenegger at the end of Total Recall. Luckily, enemies drop O2 tanks like candy, and oxygen vents are everywhere, so it never becomes enough of a hassle to interrupt Borderlands' traditional breakneck game-flow.

Borderlands' cel-shaded comic book style has always been gorgeous, and The Pre-Sequel is no exception. Pandora's moon Elpis is covered in neon blues and purples, its cool color palette a far cry from the stark, desert browns of the first game. The series gets a lot of mileage out of its art style, and this new, even greater visual evolution makes its world more stop-and-gawp worthy than ever.

What that double-jump does, however, is open up a whole new world of verticality to Borderlands’ manic combat. I regularly launched myself up high to get to better vantage points (why go around when you can go over?) and activated my butt-slam ability (which can cause huge area-of-effect and elemental damage later on) to get the literal drop on my foes. The core act of burning through every enemy you see hasn't changed all that much, but this simple addition adds an exciting new dimension in comparison to the ground-based, typically eye-level combat of its predecessors.

While low gravity makes an ambient change to how you approach Borderlands' combat, the different character classes form the backbone of how you react to each scenario--and the roles in the Pre-Sequel are vastly different than anything you've seen before. Athena the Gladiator acts as the defensive core of the team, with a huge, rapidly-recharging shield that she can use to absorb bullets, and chuck around to smack her enemies. And at higher levels she can use her knife to turn herself into a homing missile of pointy death. The now-playable Claptrap (comedically trollish as ever) has an Action Skill that randomly assigns insane, random status effects to the rest of the team, causing cursing and laughter all at the same time. Even Wilhelm, the typical turret-throwing soldier class seen in every game in the series, shakes things up a bit, with his ability to spawn two hovering bots; one to attack, and one to heal. Each class is fun and distinct, providing multiple, very different games in one, and I had a blast trying out each to see which one I liked best.

One of Borderlands' biggest draws is being able to find all sorts of crazy loot. And a good proportion of the time, that means guns. Lots of guns. The Pre-Sequel features the same randomized gear element found in previous games, meaning that you'll get your hhands on some insane merchandise. Merchandise like…

This beauty will set your foes on fire while penetrating through them with its laser blasts. Plus, everyone will know exactly where your allegiances lie. 'MURICA!

Don't be fooled by its pink exterior or its, erm, unique name; this gun will melt faces. Continuously firing it increases damage, plus getting multiple hits on the same foe will cause even more damage.

If Tron had guns, this is what they'd look like. It's got a sweet circular magazine (complete with awesome reload animation) and it causes corrosive damage with every hit.

It's not fancy, but this neat take on the classic desperado weapon of choice got me through some hairy situations. Plus, it suits Nisha perfectly.

Weapons don't get all the fun. This shield causes a massive burst of fire damage every time it fully depletes.

Not only will you chuck this gun at your enemies like a grenade when you run out of ammo, this gun freezes people in place. It's great for crowd control, and it looks awesome, to boot.

This sounds like a rocket launcher (and it almost acts like one), but it actually uses assault rifle ammo.

If you’re wondering why I’ve waited so long to mention the story, it’s because it’s the weakest aspect of the game. Set during the midway point between Borderlands and Borderlands 2, The Pre-Sequel tells the story of BL2 villain Handsome Jack and his rise from sarcastic asshole to evil sarcastic asshole. Helios Station (owned by Jack’s employer Hyperion) has been hijacked and Jack has hired you to help him get it back.

It’s a fine overall journey, filled with typically zany characters like the kooky and immensely likable mechanic Janey Springs, but none of its plot points are particularly eye-opening. Sure, there are tons of references and cameos for the fans, but when the credits rolled, I didn’t feel like I’d gained any real insight that I hadn’t gleaned from playing Borderlands 2. Given the Pre-Sequel's unique narrative positioning, that feels like a missed opportunity.

Still, the writing is typically funny and entertaining. Though while there are moments of dire straits to remind you exactly what an amusingly unforgiving hell-hole the Borderlands universe is, the overall tone is much, much lighter than it’s been before. One minute, you're helping a drunken Aussie find his tuckerbag; the next you're watching someone try to dunk a basketball on the moon. These small asides are genuinely humorous, and do help flesh out a main campaign narrative that’s lacking in substance. Oh, and it's all fairly free of Internet memes this time around, so that’s a huge plus.

Borderlands: The Pre-Sequel is packed with fan-service for long-time series vets, and gameplay-wise does a great job of providing more of the same for people who can't get enough of what they already have. For that camp, it's going to be a perfectly fine experience. For others, more of the same isn't quite going to cut it, even with the sporadic--but notable--refinements on display.