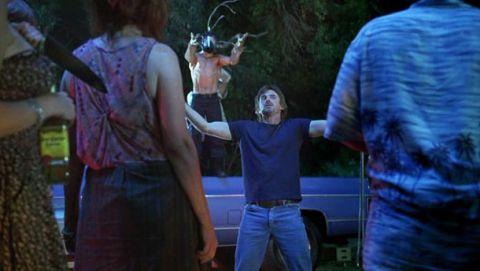 THE ONE WHERE Sookie, Bill and Jason return to Bon Temps to discover a town gone completely bonkers.

VERDICT First things first. The sex dream that Sookie has of Eric for the episode opener was totally hot. I’m really loving these new Eric fantasies! Okay, now that I’ve gushed about Eric I’ll move on to the rest of the plot...

With only two episodes left in the season, it’s great to have all the characters back in Bon Temps. And it’s Sookie, Bill and Jason trying to figure out what the hey is going on in the town that made this one so hilarious; their shocked faces when seeing the pornographic graffiti on the Bon Temps “Welcome” sign and the scenes with crazy-eyed Maxine Fortenberry in particular, made me laugh out loud. And although I’m grateful for the laughs, now that we’re headed towards a resolution with the Maryann storyline I hope that the final two episodes will get back to more dark and disturbing stuff. Less Wii playing and more cannibalism, please!

The one thing that really bothered me was how easily Sam fell for Arlene’s trap. You’d think that with a whole town hunting you, you’d have your guard up just a little bit...

The last shot of the episode – only seeing the vampire queen’s foot with blood dripping down it – was intriguing. After the let-down from Godric’s character, I really hope the vamp queen (played by Evan Rachel Wood) will turn out to be more interesting and integral to the plot.

I’m definitely excited for the next episode. Do you think Eric will be in it?

MMM, MEAT! I thought gnomes were creepy, but the pagan-meat idol for Dionysus that Eggs and Maryann are building is definitely not something I’d want on my front lawn.

GAME RECOMMENDATION Dead Space: Extraction is the Nintendo Wii game that Maxine Fortenberry seemed to really enjoy playing. It makes me want to rent a copy!

HOW TO TRAIN YOUR VAMPIRE Jessica does a serious girlfriend faux pas when she tries to drain Hoyt’s mother’s blood. Even though she’s a new vampire and may not be able to fully control her vampire impulses, Hoyt better start laying some ground rules about not eating his family and friends.

NIT PICK How are Lafayette, Hoyt and Jason not seduced by Maryann’s wiles?! I thought only supernatural beings were immune to her powers? Andy was under her spell a couple times, so why was he able to snap out of it when no one else did?

IT’S A TRAP! How did all those people manage to hide so well inside the bar to trap Sam? You’d think at least one of them would have started giggling...

VAMPIRES 101 Bill isn’t able to feed off Maryann because as a maenad her blood acts like poison to him. Lucky for her.

WTF ARE YOU?! There’s even more mystery surrounding Sookie when her hand goes all glowy and momentarily injures Maryann. Seriously, Sookie... “What are you?”

ADD IT TO YOUR iPOD The title of this episode, “New World In My View” by King Britt is the song that ends the episode when Bill walks into the vampire queen’s mansion.

BEST LINE
Lafayette: “This has got to be the worst motherf**kin' intervention in history.”