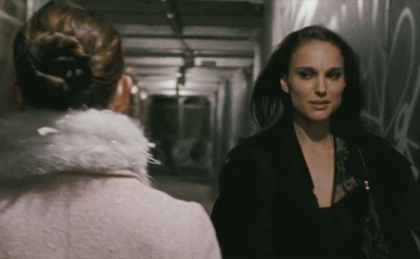 But she might just lose it again if she can’t find a way to offset her technically perfect White Swan with a Black Swan that breathes sex, bile and chaos in big, ragged gulps.

Pirouetting about Nina are people who help, hinder and ultimately unhinge her – though a little lunacy might be just what she needs right now.

Artistic director Vincent Cassel hectors and (sexually) harasses. New arrival Mila Kunis offers booze, ecstasy and her tattooed body. Protective mom Barbara Hershey turns into a screeching harridan when her baby flies the nest. And a woman who is Nina’s mirror-image haunts the edges of the frame.

Set in a cloistered world full of pitter-patter feet and stomping egos, Darren Aronofsky’s fifth feature starts off hysterical and raises the barre from there, fusing genres (psychodrama, horror, backstage musical) and masterpieces (The Red Shoes, All About Eve, Suspiria, pretty much all of Polanski’s early work) with spirited, nay, reckless aplomb.

So while Matthew Libatique’s sublimely mobile photography exhibits the grit and grain of The Wrestler as much as the sheen and shimmer of The Fountain (the twinning of Aronofsky’s oppositional styles offering a subtle extension of the doppelganger theme that is elsewhere thumped home), Black Swan has little truck with reality.

It is, instead, a crazed monument to cinema. Nina might be granted recognisably human foibles – hopes, dreams, fears, frailties; all of them startlingly realised by a never-better Portman – but her mental disintegration is, primarily, a plot device: the shards of her sanity twinkle brilliantly while never cutting to viewers’ hearts like the soft eyes of Mickey Rourke’s Randy ‘The Ram’ Robinson.

Rather, Aronofsky plunges all of his energies into creating a palace of mirrors haunted by doubles and allusions, an edifice/artifice as elegant and vulgar as anything created by De Palma.

Black Swan is a film obsessed with movement, colours, sets, sound design, Clint Mansell’s clanging score and, of course, performance, this last allowing Aronofsky to indulge in a little self-reflection by poring over the artistic process. Here, the scintillating style becomes part of the content.

It still doesn’t mean you’ll care, perhaps, but you’ll sure as hell be exhilarated.