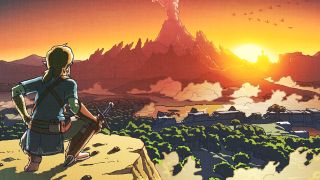 Who knew that there could be a joy in getting lost? Well, for over 30 years, The Legend of Zelda series has been proving us wrong, luring us off the beaten path to discover what lies in that cave over there, or that hidden glade, or at the top of that mountain. Of course, when those things are usually filled with magic, puzzles, gadgets and monsters, it does make them a darn sight more appealing and tempting to delve into.

The series has taken on multiple forms since its NES inception, but it's long maintained its sense of fantasy adventure, brought to life by the best game design in the industry, courtesy of Nintendo. What follows is our pick of the 10 best Zelda games in the Legend of Zelda franchise, ranked in ascending order of quality, each one representing different but equally important eras in the series' long and varied history.

10. The Legend of Zelda: Skyward Sword

By the time Skyward Sword came along, the series was already in desperate need of a shake-up, but even this Nintendo Wii latecomer has a few surprises up its sleeve. Letting you physically wield the Master Sword thanks to the Wii Remote's MotionPlus adapter, Skyward Sword's motion controls offer innovative new ways to tackle old problems. The story rewinds back to the beginning of the saga, revealing the origins of many of the series' most time-worn tropes, and its lush pastel shades belie a world which finds itself perpetually on the cusp of ruin. Skyward Sword may spend too much of its time constantly explaining things you already know, but it's worth sticking through it to witness its best moments for yourself.

Twilight Princess is the fulfillment of the promise made by Nintendo's early GameCube tech demos, and while it ultimately didn't end up as memorable or beloved as the cartoony Wind Waker, it still holds a place in the pantheon of great Zelda adventures. Transform into a wolf, utilize some of the series' most interesting tools (the spinner remains one of my personal favorites), and explore the dark side of a world that looks like the Japanese anime take on Tim Burton's earliest work. The HD version on the Wii U fixes many of the original's biggest problems (no more required cow herding!), making for a much more streamlined experience.

8. The Legend of Zelda: The Minish Cap

After Capcom and its subsidiary Flagship proved itself worthy of the Zelda franchise with the Oracle games, the developers returned with the even better Minish Cap. Minish Cap introduced gamers to Ezlo, one of our favorite side characters in the series, and one that had the power to shrink Link. The shrunken world of the Piccori people gave the series a new perspective, and the deliciously colorful graphics are some of the most memorable the GBA ever hosted. Minish Cap might not have been as long as other Zelda titles, but it's no less rewarding.

7. The Legend of Zelda: Ocarina of Time 3D

Ocarina of Time is one of the most historically important games of all time. It popularized so many techniques that are ingrained in 3D gameplay - Z-targeting, camera control, world layout - that its easy to take for granted, particularly when later Zelda titles improved on them so well. Though we'll always have a soft spot for the N64 version, the 3DS remake is the best one to currently play, not least of which because the infamous Water Temple has been fixed to some degree.

Majora's Mask arrived in Japan a mere 18 months after the release of the Ocarina of Time (which came out in 1998), and while it may reuse a lot of assets from the N64 classic, it's easily one of the strangest and most experimental Zelda game ever made. Young Link finds himself trapped in Clock Town, doomed to be crushed under an angry, demonic moon. In order to prevent imminent disaster, he must repeatedly live out the same three days, all while the town's inhabitants adhere to their daily schedules. You'll slowly piece together riddles and make permanent changes to your routine that help bring you closer to saving the world from apocalyptic doom. Majora's Mask originally ranked lower on this list, but the 2015 3DS update makes tracking its myriad side quests much easier and adds helpful hints if you need them, bringing out the full potential of the weirdest game in the entire series.

5. The Legend of Zelda: The Wind Waker HD

Proving that a great aesthetic can outshine realism every time, Wind Waker remains one of the most beloved games in the series. Set in a version of Hyrule long covered by a gigantic body of water, the last vestiges of society mete out existence on islands which dot the ocean. You'll navigate the waterways thanks to a magic talking boat, explore some of the best dungeons the series has to offer, and learn the secret ties its story shares with the Ocarina of Time. Some late-game padding prevents it from achieving a higher place on this list, though much of it is mitigated with some helpful additions and changes in the Wii U's HD port. But for a good 14 years, Wind Waker was the best 3D Zelda game in its decades-long history.

4. The Legend of Zelda: Link's Awakening

Link's Awakening was impressive in its heyday for taking the densely-packed gameplay of Link to the Past and shrinking it down into a handheld without losing anything in the translation. It's impressive now because it's still just as fun as it was nearly 25 years ago. Set in the dream world of Koholint Island, Link's Awakening shows Nintendo at its strangest, filled as it is with a smattering of iconography from Nintendo's history. Only here will you find Link able to hop on top of Goombas, win a plush Yoshi doll from a crane game, or talk to sentient Chain Chomps, all while Link tries to amass enough magical instruments to wake the Wind Fish from its slumber. It's an adventure that deserves just as much a place in Zelda canon as the series' more mainstream titles.

3. The Legend of Zelda: A Link to the Past

Like other 16-bit Nintendo classics like Super Mario World and Super Metroid, Link to the Past expanded brilliantly on its NES predecessor and defined how all future 2D entries in the series will be measured. The graphics, gameplay, and music were also top notch for their time and have aged gracefully, introducing many ideas that are now core to the series. Nintendo also used the game to push storytelling in impressive new directions, setting the mood early with its unforgettable opening. Its scale was mind-boggling for its time and is still one of the largest and most diverse worlds in gaming. If you want to discover why older gamers speak so highly of Zelda, this is the game to start with. Better yet, it's one of the classic SNES games included in the Sep 29th, 2017 Mini SNES release, provided you're able to find pre-order stock.

2. The Legend of Zelda: A Link Between Worlds

It's a bold move to make a sequel to one of the most beloved games of all time, but A Link Between Worlds is easily the best 2D Zelda game ever made. While the story takes place in the familiar Hyrule (Light World) and Lorule (Dark World) of A Link to the Past, Link's latest adventure is anything but a carbon copy, and flips many of the linear Zelda conventions on their head to great effect. The ability to rent the series' mainstay items like the bow, boomerangs, and bombs from the lovable, new character, Ravio, brings back the truly open-world feel of the original Zelda. Now, you're free to explore the beautifully detailed, stereoscopic 3D world as you hunt down dungeons in any order you choose, collect heart pieces, and spin attack spear-wielding Moblins. A Link Between Worlds is all killer, no filler; a game that lives up to its storied legacy while able to carve out its own identity.

1. The Legend of Zelda: Breath of the Wild

The Legend of Zelda: Breath of the Wild is simultaneously a reinvention of everything you know about the Legend of Zelda as well as the next logical step for the series. It deviates entirely from the overworld/dungeon/overworld formula established in Link to the Past, instead giving you a small handful of abilities that can be exploited in ways both obvious and obscure, then sets you loose into a wild, unpredictable world. It's absolutely massive, ensuring that you can run off in any direction and find something interesting, whether it's a new quest, a small town off the beaten path, an interesting bit of scenery, or one of over 100 mini-dungeons which force you to discover innovative ways to use your small-yet-versatile toolset. All of it is wrapped in melancholy, its greatest monuments lying in post-cataclysmic ruin, as our hero attempts to rectify previous failures. It's, in a word, breathtaking, and it marks a rebirth for The Legend of Zelda that sent shockwaves through the entire industry.

Check out the best upcoming Switch games and how Breath of the Wild fixes open worlds by not telling you anything.