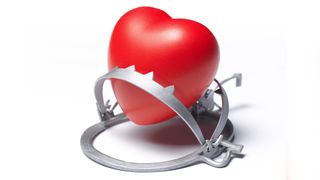 No matter how wide we stretch our fingers, sometimes the problems we want to fix are too heavy to catch. A broken heart for whatever reason - bereavement, break up, or rejection - leaves a wound in your calendar where hours spent with someone have to be filled with something else. Video games aren’t a panacea but they can help us process pain by walking miles in another person’s virtual shoes. At the very least, they’re worlds to get lost in when you just want to escape from reality. Here are 10 games that can help heal heartbreak.

Available on: iOS, and Android

Like 500 Days of Summer, Florence isn’t so much a love story as a story about love. It follows a 25-year-old woman’s relationship with a cellist she meets in the park and you can complete it in just half an hour. Like a polaroid photo, it captures a time in Florence’s life in exquisite detail without ever uttering a word. Instead, physical mechanics are the gateway to understanding her relationship; conversations between the two work as a series of jigsaw pieces, for example. As they fall in love, the fewer pieces there are to slot together, but when they argue, the more complex and spiky they become. Florence is the entry on this list that deals with heartbreak most literally, and it even won Best Mobile Game at the 2019 BAFTAs.

At your desk under the JoJoba Corporation’s acerbic lighting you read a letter from your late grandfather. He’s left you his farm in Stardew Valley. So begins a story about starting again, escaping your unhappiness, and overcoming sadness by finding a new community. One of the worst things about heartbreak is it can feel permanent - it’s hard to imagine being able to shift the leaden weight in your chest. But time is a healer and through the many hours in Stardew Valley tilling crops, rebuilding outhouses, and exploring hidden secrets in the furthest corners of the town, you’ll find there’s always new doors to open.

Available on: PC, Mac, Xbox One, and PS4

When real life feels like it’s careering out of control, sometimes you just need a game that’ll turn you into a God who likes to make virtual versions of their ex, put them in a room, and remove all the doors and windows. Or maybe not. Maybe you want to make the perfect family you could have had together, furiously jabbing “Woohoo” with Ben and Jerry’s covered fingers. Or maybe you just want to spend hours in a fantasy where you climb to the top of the movie star career and live in a mansion. The Sims 4 is a game where anything is possible, so it’s perfect for processing whatever grief stage you’re at.

You know the meme with the little dog and the hat? Where he’s sipping a cup of coffee while the room flames around him? Firewatch is a game about saying “this is fine” and avoiding your problems until they burn everything down - and it’s beautifully made. You play as Henry, a belligerent man who’s taken up a post as a fire warden in Wyoming’s National Park to escape the reality of losing his wife to dementia. The game begins like Up by showing you how Henry and his wife fell in love before she fell ill. It’s a neat trick that grounds you in his reality before you spend the rest of the game watching him reluctantly process what’s happened to her. It’s a compelling backdrop to explore your own grief within.

Read more: Games like The Sims that'll help you live your best life

Available on: PS4, Xbox One, PC, and coming soon to Nintendo Switch

The world of The Witcher might easily be included on this list purely because of its escapism potential. There’s hours to be lost here travelling from town to town, but there’s one side-quest in particular that makes it a must-play for those whose going through heartbreak. ‘The Last Wish’ is Geralt’s partner Yennefer’s idea. She wants to undo a spell placed long ago that ensured, despite their many differences, that Geralt and Yennefer could not live without each other. Removing the enchantment will test whether what they have is real. After a fight with a Dijn, the spell is lifted and the player faces a decision: without the bonds holding you together, do you stay with Yennefer or decide you’ve no obligation to her any more? The choice is yours.

Read more: Games like The Witcher 3 that are worth hunting down

Hellblade is the story of a woman descending into the depths of the underworld to retrieve the soul of her dead lover. So far, so dark. But at its core, it’s a parable about the acceptance of loss, and the realisation that you do not have to bear the blame for your grief. It’s easy to personalise when your heart is broken - “It’s my fault that happened” or “If I’d have done this maybe we could have fixed it” - but these are lies whispered by the voices in our heads. Who knows what external pressures caused cracks that no amount of kind words could fix? Hellblade’s nine-hour journey into a literal hell is difficult, but has some of the most moving scenes from a game in recent years.

Available on: Any internet browser

You can complete Passage in just five minutes. It’s a browser game that’s totally free to play, and takes you through a pixelated character’s life from the beginning to old age. There’s not much to it apart from going from left to right across the screen, but at some point you meet a partner who joins you on your journey. Passage was designed by Jason Rohrer as a meditative experience where players are invited to reflect on their own approaches to life and how they traverse obstacles. Since 2007 it has become a key part of the “Games as Art” argument, but even at its most basic, its simplicity provides a pocket of time for players to reflect and ruminate.

Available on: PC, and Xbox One via backwards compatibility

It’s difficult to explain why Braid belongs on this list without giving away the plot twist and crux of the whole game. Suffice to say, this little low-res platformer is the story of Tim, a man that’s searching for his lost girlfriend who’s been stolen by a knight. He embarks on an epic quest to rescue her, risking life and limb in the process. At release, Braid set the industry ablaze with the realisation of how powerful indie stories can be. It balanced a mind-bending time mechanic with an emotional story that, at its core, deals with loneliness. And I’ll say no more than that.

Available on: PS4, Xbox One, PC, Android, and iOS

Imagine being a teenager but your body decides to throw in a dash of time control to the cocktail of acne and hormones. That’s the reality for Max Caulfield, a young woman who gains the power to predict the outcomes of her choices and reverse time if she doesn’t like what she sees. Things are made more complex by her relationship with her former best friend Chloe Price. Her girlfriend has gone missing, and Max wants to try and help. The result is a story that grounds outlandish fantasy with the aching struggles of growing up in a world where things aren’t fair. When the choices you’ve made in real life haven’t gone your way, Life is Strange is a great game for perspective.

10. Return of the Obra Dinn

When all your mental energy is devoted to keeping your heart from falling out the cavity in your chest, sometimes you need somewhere new to channel your brainpower. In Return of the Obra Dinn you play an insurance specialist (bear with me) who’s been dispatched to an abandoned ghost ship in 1807 to figure out the fate of the crew. With the help of a magic compass and a ledger, you can watch the final few seconds of all sixty members and build a picture of what happened. It was one of the most engrossing games of 2018, and is a must-play for anyone who wants to forget about real life for a moment and get caught up in a mystery.