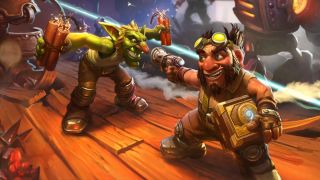 A few years ago, collectible card games were a small blip on the map of the mainstream release calendar, largely relegated to the realm of the free-to-play mobile market. Fast forward to 2017, and we now live in a world where Bethesda, Blizzard and CD Projekt Red have all released collectible card games to surprisingly major success, with even the launch of a single new card now holding the potential to make headlines.

There is clearly an appetite for this relatively niche but steadily growing genre, then, which begs the question; which of these titles are actually worth your time and money? Luckily for you, this list has the answer, with the following ten collectible card games representing the very best that the genre has to offer.

Bethesda’s entry into the world of collectible card games probably hasn’t made as big of a splash as the company might have liked, but that’s not to say that this unexpected Elder Scrolls spin-off is without merit. By dividing its duel arena into sets of two lanes, Legends adds an interesting new dimension to freshen up the traditional battle gameplay, whilst the game’s rune mechanic (whereby losing health nets you with extra cards) is also a smart means of maintaining a steady sense of balance and pace to every match.

Not everything is rosy in Legends (presentation comes to mind as the biggest sore point), but there’s a wealth of original ideas lying beneath the game’s bland exterior, giving it just enough value to squeeze onto the tail end of this list.

Play it on: PC, IOS, and Android

9.  The Eye of Judgement

Remember PlayStation Eye? Another poorly marketed Sony peripheral that eventually petered out without so much as a fond farewell? Despite its largely aimless existence, the PlayStation 3’s camera accessory was at least good for one thing - namely allowing The Eye of Judgement to become one of the most interesting and original card games of its time.

The game used real card packs to create a digital experience, as players would place their  deck on a physical board for the PlayStation Eye to capture it and bring it to life on screen. It was entertaining enough just to watch your minions and spells go to work in alternate reality, but The Eye of Judgement was also a robust and competently designed card game in and of itself, making it much more than just a visual novelty to show to your friends.

Play it on: PlayStation 3

It can sometimes feel like there are more Magic: The Gathering card games than there are Magic: The Gathering cards, as new instalments in the historic franchise have released at an exceptional frequency over the last two decades. This can make it hard to pick out the best game of the bunch but, for many, it is the very first which still represents the ‘creme de la creme.’

Often referred to more fondly as “Shandalar”, the original Magic: The Gathering was as an important step forward for its genre at the time, by contextualizing its card battles in an epic narrative backdrop. Even today, there’s a purity to the experience that you’ll be hard pressed to find elsewhere, even if some of its more dated mechanics make it less friendly to genre newcomers.

The tongue-twister of a name could definitely use some work, but it’s Yu-Gi-Oh! 5D's World Championship 2011: Over the Nexus that remains as one of the most beloved in the Yu-Gi-Oh! series of collectible card games. For starters, the original story surrounding the card battles is well told and surprisingly engaging, coupled with an excellent soundtrack that keeps duels feeling dynamic and alive. The game offered a lot to explore and experiment with in terms of deck building and challenge, too, with the depth and range of content making it perfect for those long commutes spent hooked to your Nintendo DS.

Play it on: Nintendo DS

Reigns is one of the few modern card games that isn’t free-to-play upfront, but Nerial’s wonderfully original spin on the genre makes it absolutely worth its small asking price. At first glance, you might mistake Reigns for some sort of feudal-themed take on Tinder, and you wouldn’t be too far off the mark. Players must swipe left or right on various cards, each of which represents a unique scenario for the King (that’s you) to make a decision on.

As monarch of the realm, every choice made inevitably leads to consequences that can determine both your tenure and reputation as a ruler, with most cards offering no easy answer to their presented conundrum. It’s a card game, then, but not as you know it, and one you’ll have easily sunk hours of your time into before you even realise it.

Play it on: PC, iOS, and Android

For some, the idea of collectible card games and mathematics on their own is enough to send them to sleep, so fusing the two together to make something fun and accessible can’t have been an easy task for Sean Reily, the creator behind Calculords. Luckily, the free-to-play mobile game is so inventive in its approach to number crunching that Calculords works as a pastime that entertains as it much as it does educate.

Make no mistake, your main means of battle in Calculords is doing math, using numbers and basic processes (addition, subtraction etc), to deploy your deck against an AI foe. On paper, it sounds dry, but achieving success in Calculords can be deeply rewarding, making you feel like a maths genius without ever touching so much as a sharpened pencil.

You can’t talk about card games, of course, without talking about Pokémon - it’s practically considered hearsay. While there a handful of decent titles based off of the mega franchise, it’s the classic Pokémon Trading Card Game that represents the definitive card game experience for aspiring collectors. Pokémon Trading Card Game captures the real-life euphoria of trading and battling with physical Pokémon cards against friends, but translates it onto the pocket-handy Gameboy without any of danger of paper cuts. That said, Pokémon Trading Card Game isn’t easy to come by, but Pokemon Trading Card Game Online - an updated multiplayer iteration of the original - can easily be enjoyed on the game’s website whenever you fancy some digital duelling. There's also a mobile version that's not half bad.

Play it on: GameBoy Colour, PC, iOS and Android

The story of Gwent’s origins is itself entertaining enough to almost justify its existence on this list alone. What began as a small mini-game that nearly didn’t make it into The Witcher 3: Wild Hunt has now turned into an international phenomenon, popular enough to warrant its own standalone title; one which is currently enjoying a lively public beta across PC and consoles.

There’s good reason for Gwent’s immense success too. It’s a card game which confidently stands on its own by doing away with traditional genre staples like mana or hit points, and instead focuses on the science of deck placement. It’s not as easy to learn as something like Hearthstone, but Gwent’s power is in its ability to slowly draw you ever further into its many layers of strategy and skill, making it a modern must-play for any card game fan.

By marrying collectible card game mechanics with turn-based strategy elements, Duelyst offers fast-paced battles, eye-catching aesthetics and a bucket load of enjoyable content. Granted, it’s not exactly subtle in its drawing of influences from Hearthstone, but Duelyst’s moment-to-moment tactical combat is what gives it the edge over many of its competitors. You’re not just dealing cards and trash-talking foes, but witnessing animated fights play out on a battlefield, thereby adding some much appreciated contextual weight and visual flair to every encounter. Despite the similarities, Duelyst represents a fantastic alternative to those burnt out on Hearthstone, and may even be the preferred option for the more experimentally oriented.

Could there really be any other winner? Blizzard managed to singlehandedly re-popularize the collectible card game with its groundbreaking debut into the genre, and Hearthstone has only continued to get better since first launching in 2014. The winning formula of Hearthstone lies in its brilliant tagline, “deceptively simple, insanely fun”, and it’s really as straightforward as that. Almost anyone can pick up the game and have a basic understanding of its mechanics within a few minutes, but that accessibility does nothing to undermine its tactical depth.

Deck management, hero utility, combos, and poker-style behavioural perception are just a few of the more advanced tricks sitting just at the surface of Hearthstone’s welcoming exterior. Plus, it’s all wrapped up in a gorgeous aesthetic, taking cues from World of Warcraft’s timeless art style to produce boards, cards and expansions that please the eyes even during the most stressful of duels. Like almost every other Blizzard game, it seems, Hearthstone is justifiably going to be played and enjoyed for many years to come.

Play it on: PC, OS, and Android