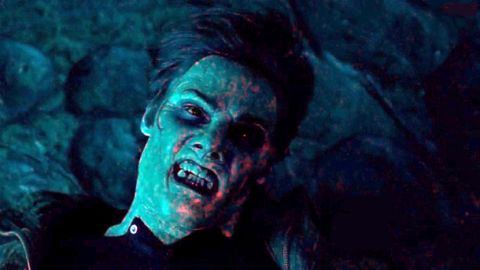 Beauty And The Beast 1.22 "Never Turn Back" TV REVIEW

THE ONE WHERE JT figures out Gabriel Lowan’s plan to harvest Vincent’s organs. Lowan kidnaps Catherine just as Vincent seems to lose his beastly nature for good. And a new ruthless bad guy arrives in town and starts hunting down both Lowan and Vincent. The angst is kept to a minimum.

VERDICT Well, Beauty and the Beast saved the best for last as this first season bows out with perhaps the best episode of the show so far. The episode has lots going on right from the off; admittedly the start has a little angst but it segues into a great, fast-paced episode with so many twists and turns that it left us wondering exactly how it would all end and just who would survive.

There’s lots going on in this episode; Lowan continues to be the complex grey character we’ve come to expect and proves he’s not the evil man shown at the end of the last episode. Sacrificing Vincent for a cure isn’t as easy a decision for him as we were led to believe. You can also tell he’s conflicted about kidnapping Catherine and he really comes across as a very layered character. Again, Sendhil Ramamurthy is on top form here and is by far the best thing about the episode. The revelation about his childhood and the death of his mother could have looked trite in the hands of a lot of other actors but Ramamurthy sells it well. We’re going to miss his character, if he is, in fact, dead; we’re hoping that some sort of beastly rapid regeneration capability might save him. What? It happened for Vincent in episode 17.

The second best thing about this episode is JT. JT starts the episode suspicious of Lowan and all things cure related. It’s a suspicion which leads the character to have a very action-packed episode. We’ve liked this character since the start but he’s been criminally underused of late. Here he gets to do some science, commit a bit of breaking and entering (with a little property damage thrown in for good measure), he kidnaps and flirts with a pretty lady, gets beaten up and finally he gets rescued by the police. He also gets most of the episode’s laughs.

The idea of Lowan’s drug actually being able to cure Vincent is an interesting one. Of course we knew that he’d be back to being the beast by the end of the episode, but it was good to see how quickly he’d choose a normal life and how easy it was to give up the beast. With Catherine getting fake IDs and being all ready to pick out a town on the other side of the country for them to escape to, she was just a bit keen too. That it was Catherine who ended up re-infecting Vincent to save his life was a good move; she basically chooses a live Vincent with his beast over a dead Vincent. How exactly he feels about this remains to be seen. Angst for next season maybe?

Speaking of the “A” word, there are two big instances of angst here. The first we can allow; it’s normal for characters to have some worries and concerns when faced with life-changing circumstances. The second was ridiculous. Catherine and Vincent, having just escaped from the violent hairy man-beast bad guy’s house while his armed henchmen are searching the place, decide to stop and have a relationship discussion? Really?

Overall it was an impressive episode that leaves you wanting more; it was tight, action-packed and full of excellent character moments with a good cliff-hanger and it leaves you with some intriguing puzzles to ponder until the shows return. We might not have been the biggest fans of this show through its first season, but we’re glad it’s got a second. Let’s hope that when it returns it manages to live up to the potential we keep seeing glimpses of.

SCIENTIST BONDING JT and Tyler’s bonding over long science words is a lovely little bit of drama, such a shame it ends with JT unconscious on the floor with a head wound. It’s also a shame that Tyler’s escape is short-lived and leads to her death.

MURDER DEATH KILL Someone tries to kill Catherine’s dad. He phones her and asks to meet her urgently. Just before Catherine can meet him he’s pushed into the road and hit by a car.

Both the hit and run and the new bad guy could be Muirfield-related; Catherine certainly seems to think so. We aren’t quite so sure.

REVELATION DOCTOR After the results a blood donor test taken by Catherine reveal some oddities, a doctor basically straight out tells Catherine’s sister Heather that Daddy Chandler isn’t Catherine’s dad. Is it even allowed for a doctor to just blurt out that sort of information like that? Aren’t they supposed to go on Jeremy Kyle or something?

NO BEAST We nearly mentioned this last week but gave the character the benefit of the doubt, unfortunately it’s here again; Vincent without the beast is a bit crap and useless. He's not very smart, no good in a fight and Catherine proves herself way tougher than him.

QUESTION ONE This week’s episode reveals New Bad Guy. Who he is and whether or not he works for Muirfield isn’t revealed. It’s mentioned that he’s just arrived in the country and that he has history with Lowan but little else is said.

QUESTION TWO What exactly was it that daddy Chandler (who’s not really dad anymore) wanted to see Catherine about? We’ve always had a feeling that he’s a bid dodgy. Does he have a Muirfield connection? Is he a bad guy? And does he know he’s not Catherine’s real dad?

QUESTION THREE Where are they taking Vincent and what exactly do they want with him? So far Muirfield has wanted to kill him and study the corpse. Is this still the plan?

BEST BEAST Lowan proves himself the better monster. He seems to wipe the floor with Vincent in their brief fight. He’s just about to impale Vincent with a fence spike when New Bad Guy has him shot.

BEST STEPHEN KING REFERENCE At one point beastly Lowan is trying to break into a room. He sticks his head through the splintered door and looks around. Don’t tell us this wasn’t a The Shining reference.

BEST LINE
Tess: "What? Girl Friday got the jump on you? She spoke geek and lured you on to the rocks with her polysyllabic phrases?"
JT: "You’re funnier when I’m not dehydrated and annoyed at your gender. Can you just get these cuffs off?"