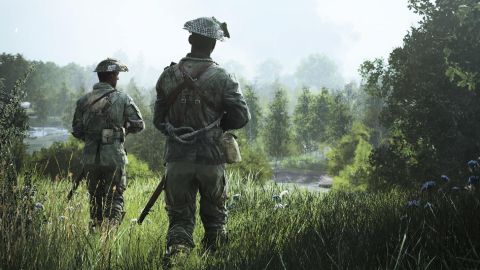 Not as drastic a change up as its WW1 predecessor, nor as wild or wondrous, Battlefield 5’s deliberative design sidelines its strengths as a simulative sandbox.

For a long time, DICE’s slogan for its more accessible take on the military sim was “Only in Battlefield”, referring to those anecdotal moments of emergent gameplay where the series’ sandbox systems would suddenly collide in miraculous harmony. That moment could be blowing up a jet with a C4-rigged quad bike or base jumping off a collapsing skyscraper after a heated fight with a helicopter but, ever since 2016’s stellar Battlefield 1, DICE has quietly dialled down the marketing on that tinny phraseology.

It’s perhaps a reflection of the fact that, over the course of this console generation, Battlefield has been slowly moving away from its milsim sandbox roots into something more choreographed, but no less operatic in flavour. Which leads us to Battlefield 5, and a World War 2 setting that pays homage to the series’ origins while simultaneously feeling its way towards new horizons for the franchise. Unfortunately, in doing so, this latest entry loses sight of what makes the series so special, even while retaining, expanding, and improving upon so much else.

While most people will be picking up Battlefield 5 for its multiplayer, this iteration thankfully doesn’t go the way of Black Ops 4, but includes a full campaign containing around seven to eight hours of solid single player content. Battlefield 1’s War Stories saw DICE finally discover an effective structure for its storytelling after years of forgettable Battlefield campaigns, so it makes perfect sense for the studio to continue that anthology format for Battlefield 5, with three separate vignettes (alongside an exceptional prologue) shedding light on some of the lesser known heroes of WW2.

These War Stories are shorter in number but longer in length than Battlefield 1's though, sadly, that concentration seems to have affected the consistency of their overall quality. Nordlys is undoubtedly the strongest of the lot, focusing on a Norwegian mother and daughter coming to blows with their German invaders, and not just because you can ski around the open map. Tirailleur is also a poetic but predictable tale of fraternal bonds amidst dire circumstances, while Under No Flag - a story of a former prisoner turned soldier struggling to play by the rules of his Cockney officer - plays out like an old fashioned British sitcom, except the jokes don’t land and the “Ello guvna!” voicework is horrendously cringey.

Gameplay wise, all three War Stories give you a strong degree of freedom over their two to three hour chapters, set in open areas with multiple objectives to take down however you choose. While the enemy AI is patchy in places, and there’s nothing particularly innovative about the mission design itself, each is worth a playthrough between breaks of Battlefield 5’s PvP, at the very least as a contextual training ground for multiplayer.

Whereas the return to history made Battlefield 1 feel like a major shakeup for multiplayer, Battlefield 5 is a more iterative sequel that succeeds as the healthy sum of small but welcome revisions to the mould. Characters move more freely, now able to sprint while crouching, perform reactive parkour stunts, and hip fire from downed positions. Meanwhile, the new Fortifications system lets players build up defenses on the fly with sandbags, barbed wire, trenches and more, which adds a fitting new layer to the offense-defense dynamics of multiplayer while providing another way for the combat averse to meaningfully contribute to the war effort.

A renewed emphasis on squadplay and class customisation, with more ways than ever to personalise your company, are also appreciated, but where Battlefield 4 had the crowd pleasing Levelution and Battlefield 1 had the equally awe-inspiring Behemoths, Battlefield 5 lacks any unique, grandstanding feature that delivers on the sweeping, mind blowing scale the series is known for.

Indeed, the eight maps available at launch are generally smaller and/or flatter than previous games, missing the verticality and inspired design of previous entries in favour of simple close quarter lanes and crowded choke points that bring to mind DICE’s first Star Wars Battlefront title of 2015. As a result, compared to Wake Island, Monte Grappa, or Siege of Shanghai, I can’t see any of Battlefield 5’s maps becoming instant classics or fan favourites anytime soon.

At least they all look incredibly pretty, with Arras’ bright Canola fields and Narvik’s snowy peaks offering unrivalled eye candy in the multiplayer shooter realm. Meanwhile, the sound team has outdone itself once again, with a cinematic OST that expertly weaves in Battlefield’s classic theme at just the right moments, and a cacophony of sound effects which evokes the horrific, unrelenting noise of industrial warfare with aplomb. The repeated cries of German and British soldiers hammily shouting “Schizer!” or “Bloody Hell!”, meanwhile, is immersive, but their theatrical exclamations can sometimes fall into unintentionally comedic territory, undermining the severity of their surroundings.

As for modes, Battlefield 5 has the whole lot, including Conquest, Team Deathmatch, and Domination, but the centrepiece that holds the most appeal is Grand Operations. A massively expanded iteration of the lauded Operations mode from Battlefield 1, Grand Operations is a dynamic, synthesized event consisting of multiple maps and modes that can last up to four hours in real time gameplay, but playing one from start to finish represents one of the best multiplayer experiences available in Battlefield 5 so far.

It begins with Airborne, as one team drops into the enemy zone from above, tasked with taking out their artillery cannons, before transitioning to a Rush-style forward offensive in Breakthrough or Frontlines and - if the teams reach a stalemate - finally climaxing with Final Stand. A tense fight to death between both teams amid a shrinking arena, Final Stand is designed to give players a brief taste of what to expect from Battlefield 5’s battle royale mode, Firestorm, due to release as a free update in March. All three of these modes each bring their own unique flavours to the reactive ebb and flow of Grand Operations, which can easily eat into all your free time as a consistently compelling step up from Operations.

Speaking of free updates, DICE has completely revamped its approach to post-launch content with Battlefield 5’s Tides of War, clearly eager to avoid another fiasco after last year’s heated response to Star Wars Battlefront 2. You won’t find any Premium Passes, paid DLC, or loot boxes here; instead, every new update, divided into seasonal chapters, will be completely free, with the only paid content outside of the base game being cosmetic items for your soldiers.

The first chapter of Tides of War begins in December, and brings a new War Story, multiplayer map, and Practice Range mode to the game. While it’s difficult to comment on content that isn’t yet included on day one, this will be reassuring news to the Battlefield fanbase, with Battlefield 5 on track to be a game which improves and expands over time, at no extra charge to the player.

10 essential Battlefield 5 tips to know before you play

But those improvements are welcome because, right now, Battlefield 5 is the weakest entry in the series since 2015’s Battlefield Hardline. Make no mistake; this is a robust, visually stunning, and perfectly enjoyable shooter, but, in trading showmanship for subtlety, Battlefield 5 has simply lost its sense of anarchic freedom along the way, thus failing to raise the admittedly high bar set by its predecessors. When the chaos of war unfolds across the screen in short, staccato bursts, it looks and plays better than ever. And yet, after more than 15 hours in multiplayer, I’ve experienced few of those 'Only in Battlefield' moments that previous games were so effective at churning up.

The good news is that this is only the beginning for DICE’s latest, as Tides of War’s packed schedule has yet to kick off. Still, making us wait for Firestorm, Combined Arms, Practice Range, The Last Tiger, and an entire suite of multiplayer content leaves Battlefield 5 feeling like an incomplete, more moderate package on launch day compared to its competitors, even if all of these incoming updates will be free to owners of the base game. This hardened soldier is crossing his fingers for battle royale to inject some of that anecdote-worthy energy back into Battlefield 5 by next year.

Not as drastic a change up as its WW1 predecessor, nor as wild or wondrous, Battlefield 5’s deliberative design sidelines its strengths as a simulative sandbox.