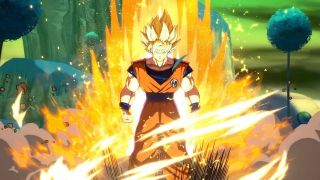 The hottest fighting game from last year, Dragon Ball FighterZ, is picking up a little steam ahead of EVO this year. Bandai Namco is hosting an "official online test tournament" at the end of July exclusively on PS4.

The tournament kicks off on Saturday, July 27 at 6pm PDT. Only 1,000 players will be able to join, sign up for the tournament start on July 22 at 9pm PDT. The first place winner will get a special victory trophy along with 10 million Zeni, the special in-game currency for Dragon Ball FighterZ.

You can sign up for the tournament by hopping onto Dragon Ball FighterZ, going to the right side of the lobby, and going up to the Tournament Mode Desk. Check out  more details about the tournament rules and regulations, including what will happen on the day of the tournament, by checking out Bandai Namco's official site.

The tournament will be broken into several preliminary rounds where players will fight random opponents in individual lobbies. The top eight players from each lobby will move on to the next round. The final round will be single elimination, tournament style.

FighterZ! We've got a special “Official Online Test Tournament” that will take place in #DRAGONBALLFighterZ on July 27th starting at 6PM PDT!Only 1,000 players will be allowed to participate so be sure to sign up now and read all of the rules: https://t.co/pnnAc1dahm pic.twitter.com/NEpa84aNzqJuly 24, 2019

While the news is exciting, Bandai Namco's Twitter was flooded with players concerned about unstable network connections and lag. Many said that the tournament wouldn't be fair with that in mind.

With EVO 2019 coming at the beginning of August, many are expecting Bandai Namco to announce more DLC and other post launch support for Dragon Ball FighterZ. They've made similar announcements at other tournaments in the past, so keep your eyes peeled when EVO hits next week.

Getting back into training ahead of the tournament? Check out 8 essential Dragon Ball FighterZ tips to know before you play.