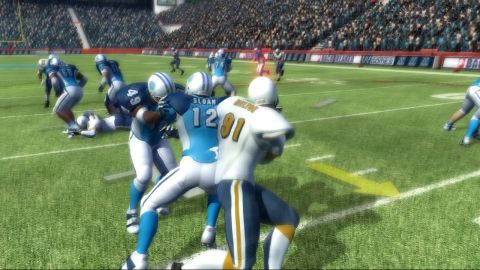 Not many games are marketed on the strength of their physics engines, but then not many physics engines have the brand recognition of Natural Motion’s Euphoria. It’s the thing that makes bodies collide with weighty authenticity in GTA IV and Red Dead Redemption, and here it makes a first sporting venture into Madden territory.

Funnily enough, though, it’s the camera rather than the slick animation that separates Backbreaker from other football sims. If you were playing from a typical camera angle and weren’twatching the animations closely,you probably wouldn’t notice little touches like players stumbling over an outstretched leg, or a flattened quarterback struggling under the bulk of the linebacker who’s flattened him.

But youdo notice in Backbreaker because you have no choice but to watch the action unfold with the camera hovering low and close behind you, atalmost the same position it adopts during Gears of War’s roadie run. While this is the most dramatic camera angle when you’re a wide receiver, taking a catch and running head-on towards the last line of defense, it’s just a bit of a mess in crowded areas.

You can’t see which player you’re going to switch to next. You can’t tell who’s in space and who’s being marked out of the play. And if you’re the quarterback peeking over a sea of towering linemen toward a receiver on the left, you can’t see anything at all on the right hand side of the field.

It’s a shame, because there’sacompetent football game to be coaxed out of Backbreaker’s basic concept. The simple twin-stick controls workokay - though we'd much rather use the face buttons rather than the analog stick to select a receiver. Butthanks toits arcade camera,shallowerAI andsluggish responsiveness even in the statistically fleet-footed players,Backbreaker favors quick reflexes over strategy. The developers probably should have leaned more towards something along the lines of Blitz: The League.

The basic graphics, incessant crap rock music, weak stadium commentary and shortage of bonus modes make this questionable value at retail alongside the likes of Madden, but it would have made a high-enddownloadable title. Despite that, it’s certainly different, and if they don’t persist with a sequel maybe they could sell the tech to EA.