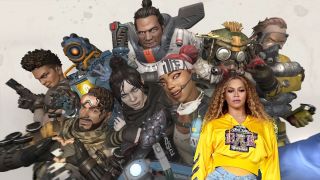 Apex Legends shocked everyone when it dropped in February with great gameplay, vibrant characters, and slick, new additions to the battle royale genre. But creating an entirely new game set in the Titanfall universe gave the developers at Respawn much to worry about, including how to sell it to fans expecting a full campaign, Titans, and incredibly agile pilots, and how to make it clear that A pex Legends was not a Titanfall sequel. After much deliberation, Respawn decided to take a page out of Beyoncé's book and drop the game unannounced.

Respawn's senior direct of brand management Arturo Castro tells GamesIndustry that the studio knew they had to "rip the Band-Aid off" and not make Apex Legends "a mode in a $60 game" but "treat it as a new IP." Doing all of this, however, could potentially alienate Titanfall fans entirely, especially across a typical six-month marketing campaign period. Plus, announcing Apex Legends to the world would give other battle royales ample opportunity to incorporate Respawn's gameplay innovations into their games - just look at how quickly Fortnite and others added a ping system after Apex Legends dropped.

The studio decided the best way to introduce Apex Legends to the community was the Beyoncé approach - as a surprise. "In entertainment and other forms of these kinds of products, the idea of long-form campaigns was being challenged," Castro says, "Beyoncé famously drops her album, and day one it becomes a massive hit." Beyoncé's last three albums (Beyoncé, Lemonade, and her joint album with Jay-Z, Everything is Love) were all surprise drops that took over social media and were gobbled up by fans. According to Castro, Respawn asked, "Why couldn't it work for games?"

Ultimately, Apex Legends' launch was a mix of the Beyoncé Approach and influencer courting, as the studio flew 100 top game influencers to Los Angeles to see the game and tease it on their social media channels before its February 4 launch. Despite Respawn head Vince Zampella's reservations about this approach (according to Castro, he called it "gross" and not unlike the Fyre Festival hype train), the studio was confident they had a gem on their hands. "Part of me was like, 'Yes, that is gross. Good call out, Vince,'" Castro says. "But what I actually thought was that's why I knew it could work, because we actually had the product to pay it off. Fyre Festival had no product. We actually had the product and the hype to build it up."

Castro and the Respawn team wasn't wrong, Apex Legends has delivered on the hype. It won the Golden Joystick for Best Multiplayer, and is nominated in five categories for this year's The Game Awards: Best Ongoing Game, Best Community Support, Best Action Game, and Best Multiplayer Game. Looks like the Beyoncé Approach works.

We're not going to drop these Black Friday game deals as a surprise. In fact, you can check them out right now.