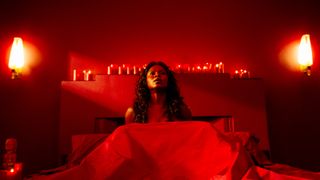 Blood isn't blood as you know it in American Gods. Gushing out of bodies in torrents as if someone stabbed a water bomb, it splashes in mid air like the petals of a gorgeously carnal flower. This’ll sound strange, but the way blood looks is a perfect metaphor for the first episode of American Gods. After being treated to a screening of the premiere, I’ve set about writing a spoiler-free preview for all those of you trying to decide whether it’s worth worshipping at American Gods’ altar - because I’m already a devout convert. Have no fear, for this is only the beginning: our full review will be coming on Monday April 17. Until then, let me preach to you about the dangerously unpredictable world of American Gods…

Based on Neil Gaiman’s phenomenally successful book of the same title, it’s hard to find something to compare American Gods to. Why? Because its story is utterly original. Telling  the tale of the fading of the old gods, it traces their inevitable replacement by the new gods that are all too familiar to us 21st-century pilgrims. God of technology, media; ones who have risen from our devotion to the world-wide web and unprecedented connectivity. The old gods aren’t leaving quietly, though. And somehow I doubt they’re going to fight fair.

Decadent, sumptuous, and certainly more than a little depraved at the edges, you’re swept up in a world that veers into dream logic often enough to fill you with questions. Shadow (Ricky Whittle) feels exactly the same, and it's slightly terrifying to see how he’s inevitably pulled towards Mr Wednesday (Ian McShane). This enigmatic conman isn't the only central character you'll meet, though. A handful of them are introduced at a steady pace, effortlessly cementing themselves as being strong enough to command scenes without any assistance. You'll wish you could take a moment to pause and mentally readjust to suit the uncompromisingly rapid pace at which the episode unfolds.

Without a doubt, Bilquis (Yetide Badaki) and Mad Sweeney (Pablo Schreiber) are the stand-out performances. Bilquis is sensuous but also slightly pitiful, her portrayal of the goddess veering between making you wish she could be restored to her former glory and wanting to back away slowly out of fear, hoping she doesn’t notice you. Mad Sweeney is a cacophony of reckless, joyous violence, his energy as disconcerting as his half-jocular lines. One moment you’ll be revelling in the sheer power of both characters, the next you’ll suddenly understand just how they’ve become irrelevant, their followers having lost faith, but refuse to recognise it. Oh, and keep an eye out for Audrey (Betty Gilpin), the tipsy widow who is furiously alive. Her performance will leave you reeling (and probably giggling too, before feeling like an awful human being).

These characters spin through an ominous topsy-turvy world that looks like a neo-noir movie poster. Saturated colours seep into every inch of scenes. Surfaces gleam under a cold halo of light that emanates from somewhere different each time, highlighting the glistening blood and sweat from a mile away. It all makes you feel like you've seen too much, that you're in too deep as your eyes are positively overwhelmed by the details to drink in.

Music thumps in the background for the majority of the episode, a steady pulsing beat that complements the heavily stylised colour palette. Palpably raising the tension levels, it feels self-consciously cinematic in the old-school Hollywood sense; filled with panache and showmanship that's not as shiny and new as it used to be but refuses to take its final bow. And my god, that final curtain is going to be a damn-you-all carnival of the senses, if a certain scene featuring the goddess Bilquis is anything to go by.

Let's not get ahead of ourselves, though. Time to look to the beginning. The opening credits feature glimpses of mechanised idols that you aren't allowed to look at for long. Flitting between an astronaut on a crucifix, a Buddha sat atop of a whirring pedestal, and a metal eagle that gleams in the dim light, you're fed a series of impressions which signal that you shouldn't make any assumptions about what faith has grown into - or its corrupting, devastating potential, for that matter. American Gods has one stark lesson to teach already: we should fear the gods - because we’re the ones who created them.