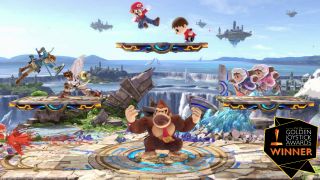 The winner of the Golden Joysticks for best Nintendo Game of the Year is Super Smash Bros. Ultimat. Nintendo’s bombastic brawler continues its legacy as being a jam-packed celebration of gaming history that its many timeless colourful characters. Nintendo’s newest entry in its original fighting series has more fighters, more stages, and more gameplay modes than any of its predecessors.

With the first game releasing in 1999, it was pretty cool seeing characters from different game IPs battle it out. Back then there were only a handful of characters, but in Super Smash Bros. Ultimate the cast has grown to an immense size, boasting 74 characters in its roster and its ever-growing. The selection of fighters not only has characters from Nintendo’s catalog, but there are some familiar faces from Street Fighter, Final Fantasy, and Castlevania. Nintendo has somehow managed to keep the balance between the lot of them, meaning that you can play as Animal Crossing’s darling, Isabelle and fight against Metroid’s draconic fire-breathing Ridley, and it’s still going to be an even match. It’s the biggest crossover in history and Marvel can forget it.

Whether its knocking elbows with friends on the couch with local co-op or in competitive matches online, Super Smash Bros. Ultimate has a bunch of game modes each more chaotic than the next. Classic, Spirit, Smash, and World of Light are all reckless, joyous fun. With the release of Super Smash Bros. Ultimate for the Switch, Nintendo has made every Smash fan’s dreams come true of playing the brawler on the go.

Super Smash Bros. Ultimate has the perfect balance of button-mashing brawling madness and the careful, tactical mechanics of fighting games, the result being a brawling game for everyone.