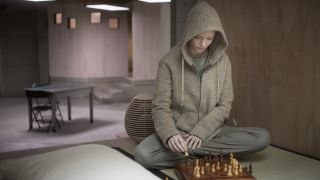 What happens when your bio-engineered ‘child’ misbehaves? Not like a toddler having a strop, but a ‘oh God, you’re super strong, we gave you solid implements and real humans to play with, and then pissed you off’ situation? That’s exactly the question posed by Morgan as a risk manager, played by Kate Mara, arrives at a facility to assess the situation after a particularly violent outburst from a genetically engineered science project. Given that this happens to be a human, the movie's ethics are fifty shades of morally grey and that’s before Morgan decides that she doesn’t want to stay on one side of a pane of glass.

Also starring Game of Thrones’ Rose Leslie and the exceptional Toby Jones, the sci-fi thriller is out in cinemas this week. I caught up with director Luke Scott - yes, that’s the son of Ridley - and Morgan herself, The Witch’s Anya Taylor-Joy, to find out exactly what goes into making a new and very human kind of monster and what makes Morgan unique.

Unlike movies like Ex Machina where AI is the order of the day, Morgan is a real human being. She’s constructed with artificial DNA but has a consciousness and is far from just a science project. She loves the outside world and when that’s taken away from her she gets, well, kind of grumpy.

“That’s the thing about Morgan. All of the research team around her perceive her so differently and yet no one actually sees her for who she actually is,” explains Taylor-Joy. “I always felt like everybody is projecting their ideal onto this thing that they have created rather than getting to know the person they have created. It was very interesting to watch and play because obviously all I was doing was trying to give a voice to - I call her my little critter because I love her - I’m very aware that people are going to say ‘Anya you’re a psycho.’ I love this crazy flesh eating creature. I see Morgan as so lost and so confused and no one is giving her correct boundaries. No one is telling her what’s right and wrong and she is a child. She’s an absolute child. And not allowed to go outside? That’s really dehumanising and again being on the other side of the glass, I really felt for her.”

Ok, it’s no more spoiler-iffic than the trailer but, as you might have guessed, Morgan doesn’t stay behind that pane of glass for long. Things get messy and result in an incredible bare knuckle fight scene between Mara and Taylor-Joy.

“It was important to me certainly to get a sense of violence and aggression out of Kate and Anya,” says Scott. “It wasn’t, in a sense, glorifying violence. There weren’t a lot of guns going off in it. That was also a conscious decision. Because I felt that it was about mortal combat. It was about hand to hand. There was an intensity there. To get Anya and Kate fighting together, which by the way they did most of it, it really was great. They really worked their socks off. I think they secretly really enjoyed it. I’m a fighter myself so I love all of that kind of stuff. The thing about that kind of violence is that it’s in character. In terms of narrative and story it’s in character to be so uniquely aggressive. Therefore it’s a surprise to see two such slight human beings going at each other with the kind of aggression that they do.”

“I love the fact that it’s two women in that brutal style,” adds Taylor-Joy. “There’s no latex and there’s nothing sexy about it. We’re just hurting each other. I haven’t really seen that on film before. Just really really brutal girl fight. Kate and I definitely felt like cool to be a part of that.”

3. Anya Taylor-Joy did the majority of her own stunts

It’s one thing to bring a heart to a super human but to bring the physicality too is pretty impressive and Taylor-Joy has the bruises to prove it.

“Morgan is a toughie. Every morning I was waking up and I was like ‘oh my God, my body. It’s so tough to be Morgan.’ But I wouldn’t take any of it back. There’s a picture on my Instagram of some of the bruisings that I encountered and that I was so proud of. I’d wander up to the stunt team and be like ‘Look! I’m a warrior!’ It was so much fun. I mean, I haven’t been around for very long but I’ve been lucky enough to do  a lot of movies and I’ve sort of just started to learn a lot of different things. I’ve really realised that I have to approach each character differently. For me, Morgan, so much of her is her physicality. So much of her is her strength. Actually when I watched the film I was like ‘my shoulders were bigger than they are now.’ Oh yeah, because I was working out like a tonne. That makes sense.”

4. This is a future that isn’t far away

There’s an obsession with the crafting of the perfect human being - and especially women - in films such as Splice, Lucy and, more recently Ex Machina. Does Luke Scott see Morgan as perfect and where does this obsession in the sci-fi genre come from?

“Morgan is perfect!,” he says. “She’s the perfect human being! She’s not a robot as in say AI or Ex Machina. She’s not a robot. She’s actually flesh and blood. Albeit she’s all synthetic. Why this? I think we’re teetering on the edge of this eventuality that’s coming. Morgan and the theory behind Morgan, that is something that we can talk about. What it’s going to look like. Morgan is, for all intents and purposes, a GM - genetically modified - human being. She is the next step of evolution. It’s coming in various guises. I think it’s certainly something that’s coming up.”

5. Morgan hints at a darkness in all of us

Ok, we’re not all happy to play with human life in perhaps as casual a manner as Morgan but Taylor-Joy is certain that her choice of roles in both The Witch as Thomasin and here is important to let us see the darker side of humanity.

“I think there’s darkness in everything,” she says. “I definitely don’t want to put myself in a genre. If the story is mine, it’s mine. I know it from the second I read the script. I know it from the second I meet the character. I never think of anything about genre. I just think about that feeling I get. However I will say that I do like the darker side. It something that so many people are afraid of looking at and it’s something that we all have. Rob [Eggers, the director of The Witch] would always say this thing. The point isn’t to shine a flashlight into something that scares us and run away giggling, it’s to shine a flashlight and face your fear and look at it. Really acknowledge that darkness. We’ve all got a shadow self and it’s important to give it a little bit of breathing space and not pretend that we’re all perfect and happy all the time."

6. This is Luke Scott’s feature debut

You might not have heard of Luke Scott but you’ve definitely heard of his Alien director dad and producer on Morgan, Ridley. But how does Scott feel about the sci-fi expectations surrounding the project? Oh, and when was the first time he watched Alien?

“I don’t think there’s any pressure,” he laughs. “You know, there’s a lot that the access affords! There’s obviously going to be a comparative discussion going on but hopefully what we’ve got here, this is unique to me. I’ve worked with him all my life! And oh, gosh. I was in Alien. When was it? 1976? I forget. I must have been about 10. I was a miniature performer with my brother and another kid. One summer vacation I got taken to a dressing room and was measured, and , before you know it, I was in a space suit. The reason why I did it, I was around 10. Maybe 8 or 9 but we were really quite short and so the set looked pretty much twice as big!”

Morgan is out in cinemas on Friday September 2.