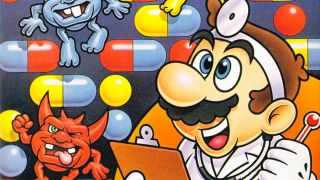 Mario's been invading our television screens since way back in 1982 when he popped up in Donkey Kong and over those 35 years, he's had quite a few careers. He might have started out as a plumber, but Nintendo has now confirmed he's not in the business anymore.

"All around sporty, whether it’s tennis or baseball, soccer or car racing, he [Mario] does everything cool. As a matter of fact, he also seems to have worked as a plumber a long time ago..." reads Mario's very own profile on the Nintendo Japan website.

But looking back at his career history, that's been pretty obvious for a while now. Reading through Mario's CV, it's clear that something is very much up. No one man could have had so many disparate, utterly incongruous occupations over the course of one career. Not when so many of them require high-level skill sets often years in the making. Mario is either the most eclectic prodigy the world has ever seen, or there's something far dodgier going on. Let's investigate...

Okay, this one we can believe. He's on a building site. He wears overalls. He's pretty handy at smashing things up with a hammer.

Alright, so we never actually see him make anything (destruction is far more his thing) but well give Mario the benefit of the doubt on this one.

Bit of a career change for Mario's second arcade game, but it's a plausible one. He's still in the practical handyman area. He's still using hand-tools. His overalls still qualify as suitable clothing. Though he does seem to have lost track of his job description somewhat in the excitement of the new.

Mario, your remit involves the installation and repair of domestic piping. That does not give you carte blanche to venture down into the municipal sewer in order to kill any and all wildlife you judge potentially problematic.

Alright, here's where the serious segues start to kick in. Carpenter to plumber we can buy, but golfer? We suppose swinging a hammer is sort of like swinging a golf club, and all those years of strenuous wrench-work should have given Mario the forearm strength required for a powerful, controlled swing.

But look how angry the Mario sprite looks in the original NES Golf. He's clearly not enjoying this. He's definitely outside of his comfort zone.

Okay what!? Yeah, seriously. In the the 1983 Game & Watch Marios Bombs Away, the previously carefree cartoon champion of the working man went to Nam. His job? Killing.

In Mario's Bombs Away, the cheery stomper of wildlife must transport bombs from one side of his camp to the other so that his platoon's officially designated bomb thrower can hurl them into the trees to blow up the enemy hiding there. Along the way he has to avoid igniting the bombs on either the enemy's torches or the flaming trail of oil below him. Why's the oil on fire? It's being lit by a soldier lying on the barrel smoking a cigarette (at least it might be a cigarette) and swigging from a bottle of something. Presumably he has a deathwish induced by the horrors of war. Needless to say, it's the bleakest Mario game ever made.

Okay, we're in safer territory now. Oh wait, hang on a minute. We're not in safe territory at all. Obviously there's every chance that Mario can drive. We're not disputing that. But to assume that basic skill qualifies him for professional (or at least tournament level) competition in three radically different, deeply nuanced driving disciplines, each of which can take a whole career to truly master*? Someone is going to to die.

Probably Luigi, given how haphazardly he's hanging out of that rally car window. The next tree will have his head off.

Mario's athletic odyssey continues. All well and good in principle, and a healthy pursuit for one whose primary jobs involve a lot of indoor work. But given his perpetually portly stature it's hard to believe a genuine professional dedication to the field. Yet here he is in NES and Game Boy Tennis, a game released in the same year he first branched out in sports games, claiming to already be a fully qualified tennis official.

Okay, you've gone too far. In the Game Boy Colour's Mario Tennis, Mazza has gone right off the deep end. After years spent battling final bosses, he who fought monsters has truly become a monster himself.

Despite never having been seen picking up a tennis racquet in his life, Mario has set himself up as lord and master of the Island Open Tennis tournament, and the last barrier between the player and victory. He is the Colonel Kurtz of Technicolor tennis.

Back to a more sensible pursuit here. Somewhere during his primary carpentry and plumbing phase, Mario (along with Luigi) found time to man the distribution department of a brewery.

Well maybe we're bigging up their role in the corporate structure a bit. They ran the bottling line and loaded stuff onto trucks. Seems fairly plausible, so well let this one go. Odd decision though, as there was surely more money to be had in the plumbing business. Maybe work had dried up. Maybe that's what drove Mario off to Nam.

Another one from the poverty years here, but at least Mario is moving up in the world. He's managing a factory this time around, but once again his qualifications for the role seem to be dubious.

Given that the game sees him haphazardly running back and forth in an attempt to stay on top of mechanical processes careening rapidly out of control, Mario is clearly making a bit of a pigs ear of this job. Still, this embracing of good honest manual work implies that he has his feet well and truly back on the ground after his sporting ego-trip.