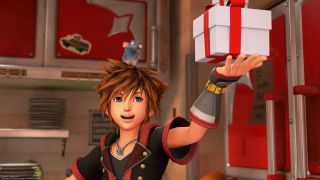 We already know that the long list of Toy Story 4 Easter eggs includes something from every Pixar movie ever made, and it looks like it may have some video game references as well. As spotted by KH13, the latest trailers and TV spots for the upcoming movie feature distinctly shaped keys which looks an awful lot like the signature Kingdom Key wielded by Kingdom Hearts protagonist Sora. Here's a screengrab from the second trailer:

And here's another look from the "Critics are in love" TV spot:

It's worth pointing out that the keys in these screengrabs are subtly different. The key shown in the newer TV spot is shorter and has fewer teeth, so either the in-movie model was updated or Buzz Lightyear and the gang are going to hunt down more than one key. Of course, there's no telling when the footage for the trailer and TV spots was prepared, so it's really not worth debating.

In any case, this is a suspiciously shaped key. Its shape makes more sense in context - it goes to an old display case in an antique shop, and cases like those often have long, thin keys - but you can see why Kingdom Hearts fans are betting it's a reference to the Kingdom Key. Its base is filled in and the teeth aren't exactly a crown, but the silhouette is a dead ringer for Sora's best-known weapon. Toy Story was a main area in Kingdom Hearts 3, so there may be something to this theory after all.

If you're looking for a proper Keyblade, check out our list of the best Kingdom Hearts 3 Keyblades.