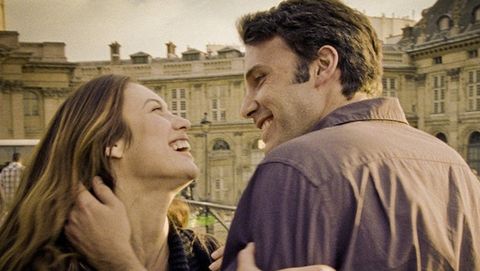 This time last year, Terrence Malick’s The Tree Of Life was fighting it out with The Artist at the Oscars.

So it’s a shock to see him back so swiftly with To The Wonder , given that the minimum amount of time the distinguished director has taken to make a new movie in the past has been five years.

Some will argue that a few more months spent chipping away at this love story - the first fully contemporary movie of his career - might have been in order. But one thing’s for certain: even for Malick, this is frontier filmmaking.

But here he pushes the experiments even further. Almost abandoning a traditional narrative, he expands on the ideas he explored in TTOL .

More about mood and moments than plot beats and character arcs, this voiceover-driven tale feels so personal you almost feel guilty watching it, like we’re eavesdropping on the most intimate of exchanges.

Forget typical back-and-forth dialogue: To The Wonder is all snatched conversations and deconstructed drama.

Yet if it is intrigue you want, it feels like the famously reclusive Malick is lifting the lid on his own love life. (His second wife was a Frenchwoman; his third his high-school sweetheart.)

We begin in Paris, where Midwest native Neil (Ben Affleck) is arm in arm with the beautiful Marina (Olga Kurylenko, radiant), accompanied by her daughter Tatiana (Tatiana Chiline).

When mother and daughter relocate to Bartlesville, Oklahoma to live with Neil, the difference between the European urban elegance and the rural Midwest with its golden wheat fields is stark.

There are issues too: Neil isn’t ready to commit to Marina, who returns to Paris with her daughter just at the point his head is turned by former classmate Jane (Rachel McAdams).

On the fringes is Javier Bardem’s Father Quintana, a priest who suffers from his own crisis of belief. With Affleck barely uttering a word throughout, the story is driven by Marina’s stream-of-consciousness voiceover.

Coupled with DoP Emmanuel Lubezki’s bold images, what results is an undeniably unique portrait of a love affair. Malick won’t be winning any converts, and next to Tree this feels like a rough sketch.

But as long as you’re open to his abstract approach, you’ll find a unique film full of everyday beauty.