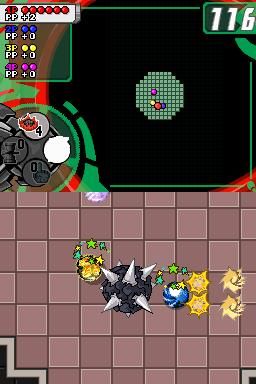 Somehow Neku gets crazy psychic powers when he wakes up in bizarro Shibuya. Said powers enable him to read and sway people’s thoughts, but also psychically scan an area to see monsters in the area. By tapping the monster icons, you’ll engage in combat. If you’re feeling lucky, you can tap a few icons and chain a number of battles together.

Chaining increases an enemy’s drop rate and the spoils you collect. You can even open up your menu at any time and select the level at which you fight. The higher the level, the easier it is to defeat enemies. Lowering the level decreases your HP and makes enemies tougher, yet the rewards more enticing. Finding a balance amongst a sea of customization is one of the best things about World Ends. You can literally fight any way you want. We kept initiating battles just to see if we’d get any better at fighting.

But therein lays the downside of World Ends. Sometimes everything from pin collecting to customizable battles feels a little more complicated than they should. There’s already a lot to keep track of over the course of your 20ish-hour adventure and it’s almost like World Ends really wants you to know that there’s an epic RPG here regardless of how tiny the DS cart is. We haven’t even touched upon the clothing styles that raise or lower your stats depending on what region of Tokyo you’re in. It’s a really cool feature and engages you more in how your “armor” effects you at all times. But saying there’s a lot to do in an RPG is like whining about double-jumping in platformers - it’s really nitpicky and shouldn’t sway you from playing.

The World Ends With You is an amazing marriage of style and gameplay. The dual screen combat further stretches what the DS can achieve in gaming that is far from a lame gimmick. We haven’t played an RPG in quite a while that is not only engaging, but actually brings something fresh to the genre. Hell, we just want to see another World Ends soon. DS sequel? A Wii adventure using the Nunchuck and remote to handle two different characters? Sure, we’ll eat them up. Our hope is that you don’t pass this one by. With so much innovation and style, you won’t be sorry.