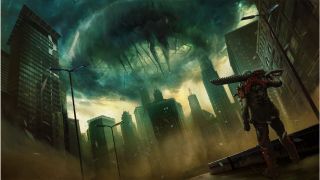 We’re hunting for a particular piece of armour. We’re one chest piece away from upgrading our current set to something special, and we know the character who’s wearing the coveted gear is lurking in a glade within Gideon’s Peak, a leafy forested area within a larger map. Now we just need to chop it off of him and give ourselves a fighting chance against Captain Cervantes, the map’s boss, who just won’t die. Like the original, The Surge 2 enables you to target specific body parts on your opponent when attacking. Aside from this, combat is a Sekiro-like deft dance of blocking, parrying, and melee attacks that feels solid and flexible. But it’s the ability to aim for areas of an opponent’s body that ensures each scuffle feels unique to this Soulsborne.

SAVE UP TO 51% ON OFFICIAL PLAYSTATION MAGAZINE SUBSCRIPTIONS

At first we’re targeting body parts just to hit an enemy’s weak points, but soon we discover we can create weak spots by striking a particular area. However, it’s the impact of the crafting system on the fight that really swings things in favour of The Surge 2 being a potential sleeper hit. Because we need that chest piece to craft an upgrade for our own armour, we hunt for an enemy who has that gear, ignoring any others we come across and focusing on our goal. We find him, and give all our attention to the piece we need. With each hit we land our combat meter raises, and, when filled and activated, a brutal cinematic plays out that that sees us hack off our prey’s chest armour... and his torso splits from his legs along with it.

The setup introduces some tactical aspects, as the same meter we fill up during a fight is used to replenish our health. Do we continue to pursue our prey or take a breather to boost our protagonist’s health and stay in the game? It’s this RPG core that enables The Surge 2 to carve its own space in the increasingly crowded soulsborne genre, and it’s one reason why there’s no easy mode.

“For us, this is about how to take on an enemy, as this will very quickly ruin the experience,” says Deck 13 CEO Jan Klose. “Because it’s really about the one-on-one fighting, and your own power. So for us, the easy mode is it’s an RPG; you use the core elements to gather stuff, level up, and then take on the same enemy. So we don’t throw you at the same barrier over and over again, and demand you just get good at it, you can just go somewhere else and use your proficiency whether you’re an explorer, or you just like to grind and attack lower level enemies in order to get better and then you can come back.”

We experience this loop for ourselves as we push further into the map. Slightly open, with exploration revealing multiple routes, secret areas, and stashes of loot, this park is set in the broader map of Jericho City – a vast urban sprawl closed off from the world in an attempt to hold back a techno-virus that could destroy or save humanity (depending on your point or view).

The human fodder that once littered the map are now in our pocket. A deft use of dodge and a dab of the superb directional parrying system (you push against the direction of an attack to stagger your enemy) means we can control fights with the early human opponents. Add to this the new drone system, which enables us to target enemies with shotgun and sniper shots, as well as scan them for weaknesses, and we feel empowered.

The sense of being able to take on all comers makes us long to explore Jericho City some more, and finding a Force Hook enables us to unlock ziplines to new areas. We discover a bonus mini-boss hidden away, a bronze statue that jerks to life as we pass by. We’ll get to wear its parts as a shiny Art Nouveau set of armour if we manage to defeat it. We feel a new hunt taking shape..