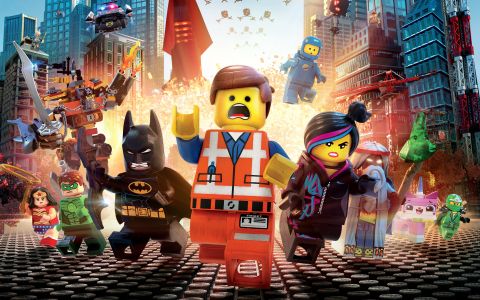 Think about this for a second: The Lego Movie Videogame is based on a film, itself based on games inspired by toys. It doesn’t get any more meta than that, folks. But don't write this off as another forgettable movie tie-in game--The Lego Movie Videogame is actually pretty awesome. And though it looks and plays much like the other Lego games that came before it, there’s plenty to like about these plastic toys.

Sticking to a familiar tried-and-true formula, Lego Movie lets you play as various Lego protagonists from the film as they make their way through 15 colorful chapters, solving puzzles and smashing enemies into pieces--quite literally--along the way. You often need to swap between different characters and use their unique abilities and weapons to progress. It's a quick and painless process that adds plenty of variety to combat and exploration.

It also doesn’t hurt that each chapter feels different from the last, offering you something new to do along the way. From racing down a highway to shooting down enemy helicopters to swimming through eel-infested tunnels, Lego Movie stays fresh and keeps you entertained. Fun mini-games also brighten up your campaign, such as a hacking game that plays a lot like Pac-Man and a rhythm game that is sure to get the film’s theme song stuck in your head.

If you haven't already seen The Lego Movie, its video game tie-in will spoil much of its plot through cutscenes and dialogue. Even though it doesn't include every bit of the story, it does a good job of filling you in when necessary so you never feel very confused about what's going on. Exploring the film's narrative in video game form is pretty enjoyable, and Lego Movie succeeds in transforming the more frenetic moments into exciting gameplay scenarios. Emmet’s escape from Bricksburg, and even the final minutes of the movie, are particularly memorable interactive moments during which you have full control. Scenes that may have taken just a few seconds on-screen are stretched out into lengthy objectives in each level, offering some additional and imaginative detail to scenes you may have overlooked. It’s all done incredibly well and keeps you invested in what’s going to happen next.

Clocking in at around six hours, Lego Movie isn't terribly long, but it's hard to complain when those six hours are packed with exploration, witty lines, and plenty of memorable moments. Most of the laughs will come from snippets of the film, but the game builds on that humor with its own clever script. Want Batman to build something for you out of a stack of colorful bricks? Too bad, he only works in black…and very, very, dark grey.

Even after the credits roll, there’s plenty of reasons to go back and romp around. This wouldn’t be a proper Lego game without tons of un(b)lockables, and you’ll only have access to a few of them during your first playthrough. Once you get access to Superman’s laser beams, for example, go back and melt all those golden blocks and explore areas you couldn’t before. There’s even a bonus room that lets you build classic Lego structures and vehicles using instruction manuals you can collect. It’s the sort of fan-service that'll strike a nostalgic chord for those who grew up playing with Legos as kids. Still, the amount of content here is considerably less than that in Lego City Undercover or even Lego Marvel Super Heroes, and Lego Movie's HUB worlds are comparatively small.

Contrary to to the catchy theme song, not everything is awesome, especially when glitches ruin the fun. I got stuck a couple of times by jumping into areas I couldn’t get out of; only restarting the game could free me from my plastic prison. Another time, a conversation failed to load, forcing me to start the chapter over from scratch. It’s a shame considering these moments completely disrupt Lego Movie's great action.

The Lego Movie Videogame is one of the better movie tie-in games out there, and it may even get you to see the film if you haven’t already. Its action-packed stages will keep you on your toes, and all those cheeky quips from its characters are guaranteed to put a smile on your face. It may not bring anything new to the table, but The Lego Movie Videogame takes some of the best elements from the series and delivers it all in a charming package anyone will want to play with.