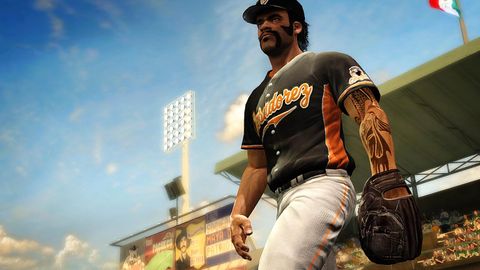 Your typical baseball came doesn%26rsquo;t come packed with fireballs, explosions, powerups, and character-building, but chances are you already knew The BIGS 2 isn%26rsquo;t your average hardballer. In fact, it celebrates not being a staid old sim; yes, it sports MLB licensed-players, stadiums, and teams, but in reality it%26rsquo;s got more in common with a good ol%26rsquo; action RPG than anything else. While the language is spoken in fastballs and double plays, games are won and lost with strategic usage of scarce resources and tactical decision-making. It%26rsquo;s also the most fun we%26rsquo;ve had playing just about any sports title in this generation.

The gorgeous visuals and highly stylized gameplay stand out from the first pitch, but what%26rsquo;s more remarkable about The BIGS 2 is the tense back-and-forth chess match that unfolds with each game. Choosing when to use hard-earned turbo boosts at the right time %26ndash; not to mention executing even tougher-to-get Big Heat pitches or Big Blast at-bats %26ndash; will have you scheming and planning from the get-go. The development gang at Blue Castle did a tremendous job making sure that games played in either single-player mode deliver the goods, but there%26rsquo;s no doubt that head-to-head matches against a friend ratchet up the fun factor exponentially.

Vets of the original game will be able to jump in pretty quickly, as the core mechanics remain the same. However, just about every aspect of on-field gameplay has been tweaked or upgraded, and there are boatloads of new additions that add a lot more flavor to the mix. The most prevalent of these is the batter%26rsquo;s wheelhouse, which can work in both players%26rsquo; favor. Hitters can cause major damage if they get a hold of a ball in their hot zone, but pitchers get more turbo boost if they%26rsquo;re able to blow one through the spot. This immediately adds more drama to each at-bat, as a healthy store of turbo is a key to victory.

The core of The BIGS 2 is the Become a Legend mode, a meaty single-player campaign that allows you to take a created character and from a rehab assignment in Mexico all the way to the Hall of Fame. While the structure is virtually the same as the original title%26rsquo;s Rookie mode, there%26rsquo;s a wider (and notably tougher) variety of tasks to accomplish this time around. New to the fold is a full 162-game season, featuring trades, stat tracking, and other accoutrements you%26rsquo;d expect. There%26rsquo;s also online play for head-to-head matches and in Home Run Pinball, but surprisingly there%26rsquo;s no leagues or tournaments %26ndash; definitely a bummer.

While we%26rsquo;ve got a small list of complaints %26ndash; you get no instant replays, pitches are tough to pick up in Home Run pinball, and the commentary gets repetitive really quickly %26ndash; they don%26rsquo;t really impact the overall awesomeness that is The BIGS 2. In fact, it%26rsquo;s our favorite baseball game of the season, even if it%26rsquo;s really just an action game dressed up in pinstripes.