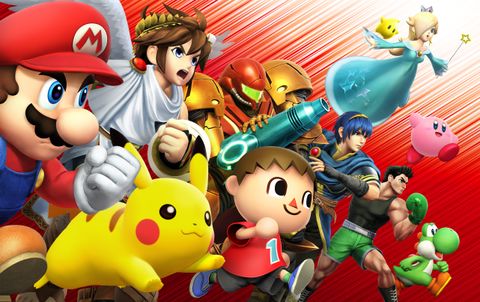 The magic of the Smash Bros. series can be condensed into one simple principle: whether you win or lose, you just want to keep playing. Even after hundreds of matches--solo or multiplayer, with items and without--I still get giddy every time a round starts. Super Smash Bros for 3DS proves that Nintendo's high standard of excellence for the series' gameplay and polish applies to handhelds just as much as home consoles. But the transition to the small screen comes at a major cost: local multiplayer isn't 100% reliable.

If, by some small miracle, you've never played Smash Bros. before, it's an unconventional fighting game starring characters from Nintendo's many franchises (plus some cherry-picked guests mixed in for variety). It's you against up to three other combatants, and rather than depleting their life bars, you'll use zany attacks and powerful items to push your opponents off the stage. Series vets should know that Smash Bros. for 3DS feels much more in line with the methodical, somewhat floaty feel of Brawl than the ridiculously fast pace and palpable weightiness of Melee. Even if the 3DS gameplay isn't precisely what Melee fanatics demand, it provides enough depth for the hardcore crowd, while still being incredibly entertaining to casual players. Thankfully, randomized elements like Brawl's ill-conceived tripping mechanic have been removed from the equation to achieve maximum enjoyment for players of all kinds.

One of the biggest appeals of the Smash franchise is its cast of wildly diverse characters, and Smash Bros. for 3DS delivers a roster full of established fan favorites and appealing oddballs. I'll refrain from spoiling any of the secret inclusions, but all 51 characters are nicely balanced: everyone's got their own strengths, and none of the characters feel like throwaways. That said, some fighters feel much more unique than others. For every character that has exciting new abilities, like Villager's projectile-stealing Pocket or Shulk's stat-changing Monado Arts, there's someone else who has yet another slight variation of a counterattack move. Still, you'll no doubt find a character you absolutely love waiting for you in the massive roster, and you can feel confident that they won't pale in comparison to someone else's main pick.

Playing Smash on a handheld feels odd for about five minutes--after that, your fingers will comfortably find their grooves, whether you're playing on a classic 3DS or an XL. The graphics, which are a rainbow of bright colors and snazzy visual effects, look crisp on the 3DS screen, though the 3D effect doesn't add to the experience. One of the smartest additions is a you-can't-miss-it graphical effect that lets you know whenever you connect with a powerful attack--so even when the camera's zoomed out on the 3DS screen, you'll still know exactly what hit you 3,000 feet off the stage. The 60fps framerate keeps the speed and fluidity of the fights completely intact, and once you've gotten the feel for performing directional Smash attacks on something that isn't a GameCube controller, the 3DS control scheme becomes just as natural.

No modern-day fighting game would be complete without online multiplayer, and Super Smash Bros. for 3DS does a good job of washing out the grimy taste in my mouth left by Brawl's subpar online play. The For Fun mode lets you join up with like-minded players for some lighthearted, items-on matches, while competitors looking to truly test their skills can square off in the bare-basics For Glory mode. The latter offers timed matches (no thanks) and 2-stock survival matches in 1v1 or 2v2 team play. When your connection's running smoothly and you're playing against an opponent of equal skill, the online play is an absolute blast, letting you train up and play Smash the way it was meant to be played.

When your connection isn't running smoothly, things go from great to unplayable. Latency and reliable netcode are the make-or-break determinants of enjoying fighting games online, but Smash Bros. for 3DS has yet to master them. Even a split-second delay spoils the fun, as your dodges or ledge-grab attempts won't respond when you need them to. Four-player matches can have such massive slowdowns that they degrade to the point of being intermittent slideshows. When online play works well, it's great. When it gets sluggish or stutters, it's downright awful. Pretty typical for a fighting game, but this dichotomy may come as a shock to longtime Smash players.

What's even more of a buzz-kill is the fact that local multiplayer isn't exempt from unreliable connections. Four-player matches crap out a quarter of the time, becoming so choppy that they make you feel like you're controlling your character underwater. At times, the action can even come to a complete standstill, utterly hamstringing the excitement and momentum that Smash is so well known for. The amount of lag is directly proportional to the number of players, since one-on-one matches work fine, and three-player games only have a few intermittent hiccups. But just like online, constant interruptions--if you're unlucky enough to experience them--will put a damper on everyone's good time. Worse still, isolating the problem is near impossible, since no variable (cellphone use, playing in a moving car, specific levels, items on or off) produced identical, lag-filled results. It's like the lag-in-local-play boogeyman is just out there, somewhere; you won't know when he's coming, but you better pray to God he doesn't get you.

Knowing just how bad the local multiplayer can get, the value proposition here just doesn't add up. Smash Bros. on consoles (like, say, the upcoming Wii U version) requires one copy of the game and four controllers for flawless multiplayer fun. Smash Bros. for 3DS requires four copies of the game and four individual systems to create an inconsistent, and therefore far less fun, experience. For many casual fans, four-player bouts are a fundamental part of the Smash Bros. experience, so it's a massive downer to see the 3DS version struggle to deliver a consistent experience. And because of how the 3DS local wireless works, you're pretty much at your connection's mercy if there's any interference in your play area.

Do I know you?

Here's a quick, spoiler-free refresher on some of the newcomers in Super Smash Bros. for 3DS.

A ranged specialist with super-strong Smash attacks that travel a short distance.

A heavy bruiser that can dish out damage or reflect it with his counterattack.

Has some very fun, bizarre moves, like a fire hydrant that pushes fighters around and a power-pellet-munching horizontal charge.

One of the slipperiest fighters, able to zip around the stage and get some quick shots in before opponents can react.

Has some slow but powerful special attacks, which need time to recharge after a set number of uses.

Truly an outlier in the group, with some of the weirdest (and most fun) attack animations.

Beats opponents to a pulp on the ground, but is incredible vulnerable in the air.

This duo is very tricky to control, but can safely pester enemies from long-range.

Has pretty stiff handling, but her normal attacks pack some serious punch.

Although Smash Bros. was made to be enjoyed with others, Smash Bros. for 3DS doesn't skimp on single-player diversions. This time around, though, the solo play feels basic and unexciting, and not just because there's no equivalent to the epic Subspace Emissary adventure seen in Brawl. Classic mode is a serviceable Arcade-style gauntlet, while All-Star Mode is essentially the same experience with a Nintendo history twist. Score-chasers will appreciate the return of mini-games like Home Run Contest and Multi-Man Smash. But Smash Run, the new mode with the most potential, comes up short. It has you wandering around a gigantic, maze-like stage, collecting stat boosts by beating up minor enemies that aren't fun to fight, before plopping you into a randomly selected contest. What this boils down to is five minutes of monotony for around 20 seconds of unpredictable excitement, a gameplay loop that loses its appeal almost immediately.

The Smash Run mode is also meant to encourage a new twist for the series: customization, where you can adjust your preferred fighter's specialties (attack, defense, or mobility) with equipped items and change the way their suite of special moves work. But as I learned from the somewhat similar gem system in Street Fighter X Tekken, giving players the option to tweak their fighters goes against the core foundation of a fighting game: learning how each character works so that you know how to play as or against them. While the Mii Fighters are a clever, even-handed way to incorporate player-made characters into the roster, all the other customization options seem counterintuitive to getting the most out of the game. In short, it doesn't add anything really meaningful to the overall experience.

Super Smash Bros. for 3DS opts to improve the familiar gameplay rather than reinvent it, with a focus on well-balanced bouts and technical depth. But in a game from a series that's so well-known for its enjoyable multiplayer, it's disheartening to see the local wireless be so inconsistent in delivering smooth, uninhibited fun. If you want to get ahead of the Wii U pack and don't mind the bare-essentials feel of one-on-one duels, this 3DS version is worth playing. Everyone else who's expecting great things from Super Smash Bros. for Wii U: just wait.

Editor's note: The text, score, and pros and cons of this review have been updated to reflect additional testing of the latency issues during four-player local multiplayer.