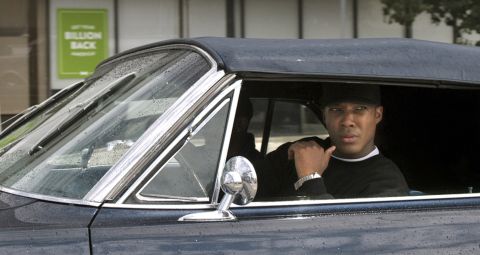 Straight Outta Compton soars for an hour before spiralling into a bloated, melodramatic mess. Still, it’s worth it for the early ferocity, capturing just how powerful N.W.A really were.

In a year where the spotlight has fallen – yet again – on police brutality, there are times when Straight Outta Compton, F. Gary Gray’s sprawling, two-and-a-half hour ode to seminal hip-hop group N.W.A, feels electrifyingly urgent.

After all, this is Niggaz With Attitudes, whose righteous fury would found “reality rap” – social commentary informed by tough, working-class streets, where growing up black and poor means guns, drugs and racist cops with “the authority to kill a minority.”

Tired of being broke, bullied and, in Dre’s case, looking after a child, they independently record their debut single, ‘Boyz-N-The-Hood’. This gets the attention of sleazy manager Jerry Heller (Paul Giamatti).

It is with Heller’s help that they’re signed and begin to record debut album Straight Outta Compton, a montage that gives way to one of the biopic’s more resonant scenes: the group, standing outside the studio, harassed into humiliation by police officers.

It’s not subtle, but it’s here, with faces in the dirt, that ‘Fuck Tha Police’ is born – an inferno that became an anthem of the oppressed, and that led to notoriety, threatening letters from the FBI and a riot breaking out after an (illegal) live performance. It doesn’t last, though.

As N.W.A begins to fall apart, so too does the momentum, SOC’s wit and revolution petering out for the melodrama of contract disputes – a topic, much like holiday photos, that is only interesting if it’s relevant to you. Stretching thin, the second half jars from one milestone to the next – The Chronic! Snoop Dogg! 2Pac! Ice Cube the family entertainment star!

It’s fun for fans of west coast hip-hop but suffocates any hope of depth; what, for example, about the group’s lyrical misogyny and homophobia? Ice Cube’s conversion to the Nation of Islam? Or the real story behind their beef with Eazy-E, who died of AIDS in 1995?

Alas, as is usually the case of these kind of biopics – those produced by their very subjects – history is tweaked, tucked and tidied up to fit.

Straight Outta Compton soars for an hour before spiralling into a bloated, melodramatic mess. Still, it’s worth it for the early ferocity, capturing just how powerful N.W.A really were.