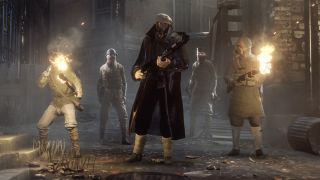 Vampire is a “mortal word”, I am told by Stéphane Beauverger, Vampyr’s narrative director. “A word created by writers” which doesn’t do the real thing justice. Vampyr’s night-dwelling, blood-loving creatures are “so much more”. The RPG from Dontnod (creators of Remember Me and Life is Strange) puts you in the shoes of a recently-turned vampire Dr Jonathan Reid, finding his feet in 1918 London as its ravaged by the Spanish flu. A mysterious outbreak of flu-ridden vampires has hit its streets, so you’ll have to dodge them and vampire hunters alike to find out exactly where the pandemic came from.

You might think Reid is the one and only type of vampire, the classical one we know from Dracula. Wrong. Four types of vampire are stalking London’s streets, plus a whole three types of supernatural combat to massacre vampire-hunters. Beauverger sat down with me to talk about what’s in store (whilst probably trying not to look too disturbed by the overenthusiastic, borderline-fanatic gleam in my eye). Joy of joys, the things he told me tipped me over the edge and got me more excited than ever to sink my teeth into Vampyr.

Roll up, roll up for the first type of vampire and the one you happen to be. I would say look in the mirror to get a glimpse of what type Reid is, but we all know what happens with vampires and their reflections. You’re an Ekon, the type of vampire we think is the traditional bloodsucker. “Aristocratic”, “seductive”, and “charming”, they look like humans and walk among us with ease.

No slumming for them though; you’re more likely to bump into one in London’s posher district as they’re no strangers to luxury. “They are so part of the aristocracy” that they’ve adopted some of its less tasteful quirks. Namely, their vampire club (yes, they actually have one) is “so conservative that they don’t accept female members”. Your mentor Lady Ashbury, who is also an Ekon, isn’t too chuffed about this. An Ekon’s existence is based on persuading humans and using mind tricks to get what they want - not surprising considering one of the key mechanics in Vampyr is your ability to mesmerise humans so you can lead them to a discreet alley and chow down on their veins.

Skal: The unwanted pests of the vampire world

If the Ekon are at the top of the vampire hierarchy in terms of classiness, the Skals are way down at the bottom. Similar to ghouls, these “lesser vampires” are seen as degenerates by other vampires, held in contempt for skulking around. Swarming below London’s cobblestones, for centuries they’ve been living in an underground city in the sewers, out of sight and out of mind from the other vamps.

As a faction you’ll get to interact with, Skals should be treated with caution. “They tend to be messy, they tend to kill a lot of people”, Beauverger explains. Why are they hated so much? Profoundly, it’s because “they remind vampires that they are the unwanted children, so to speak”, says Beauverger, peaking my interest even more. Humans and vampire hunters aren’t the only ones Skals are hiding from - their name means ‘slave’, I’m told, perhaps indicating that they were once under the yoke of the Ekon.

Werewolves and vampires are usually mortal enemies. However, Vulkods are what you get when you combine the two. Hulking, huge vampires with grey skin, they’re the muscle of the vampire family. Beauverger tells me that for centuries humanity have been calling them by the wrong name, as “sometimes people call them ‘werewolf’ but they are wrong”.

I saw a brief glimpse of them during the demo of Vampyr, and by the looks of it you’ll get the chance to fight one as a boss. Changing their body into a more bestial form with long, sharp teeth could even be on the cards. Assuming they’ll be mainly melee-based and inclined to hit pretty hard, it sounds like they’ll act as a counter-balance to the supple, discreet Ekon. I’d love to hear a conversation between the two. I can almost hear the barbed insults about hairballs and posh accents now.

Lastly, there’s a type of vampire which doesn’t quite fit into the same ‘mythology’ criteria that Skal, Vulkod, and Ekon slot into. Nemrods are vampires who despise their own kind. They hate what they’ve become, so their one mission is to hunt down their night-dwelling relations, and kill them. If you’re lucky you’ll get to meet one in the game, but Beauverger says that “you are not aware of what they are” at first.

Nemrod literally translates into ‘hunter’, so you might want to hope you never encounter one. If you do, it’s only in hindsight that you’ll realise you’ve crossed paths. Scattered throughout the game is a collectable, “a fragment of a very ancient book that will give you intel about the hidden truth about vampires”. After having read its worn pages, as Beauverger put it, “you can say ‘Hey – let me think, that guy I met... he could be a Nemrod!’”.

Plus… the one that started it all

Putting all these vampires together might sound like they’re an oddball comedy waiting to happen, but getting into the nitty-gritty of their DNA reveals that they all have one common origin. Beauverger explained that their roots, however, are “so old that even very ancient vampires don’t remember where they come from”. Obscured in the mists of time, “they have their own legend” about their ancestors which is surely going to be hinted at during your time in London.

Part of Vampyr will be devoted to sending you off to find out the “real truth” behind what spawned the night-dwellers in the first place, “and the hero will be confronted with one of the very, very ancestral aspects of the species”. Beauverger was tight-lipped when it came to revealing any more, but he did let one thing slip. “It will be linked with the very basic roots of English mythology”, he mentions. Anticipating my next question, he answered it before I had a chance to ask. “I’m not talking about hobbits”, he added. Damn.

It would be criminal to include this many types of vampire and not give you an equal amount of choice when it came to tearing people apart. Reid might be an Ekon, but he does have some abilities which sound more inclined towards Vulkod and possibly even the ancestral, original vampire who presumably can cause as much chaos with blood as a toddler can with a chocolate ice cream and white surfaces. So here’s the three types of vampire-style combat Vampyr has to offer, with more to come...

As would be expected, blood plays quite a big role in Vampyr. Apart from guzzling on veins like there’s no tomorrow, you can also use the crimson life-juice during combat. One of these things involves taking “control of your own blood to strengthen your body”, Beauverger reveals. Presumably this’ll toughen up your skin during fights, making you more resistant to damage and inclined to cackle as the vampire hunters’ bullets skim off your pale hide.

Or if you’re fond of crowd control, during the demo I glimpsed Reid remotely coagulating someone’s blood in their veins, paralysing them and giving Reid one less problem to deal with. That’s not all, either. Beauverger lets on that there’s multiple ways to incapacitate your opponent. Seize his blood, then manipulate it to “make him burst or boil, and things like that”, he said, leaning away as I gasped a little too enthusiastically.

Skirting your foe and controlling his blood with a wave of your hand is one thing, but some of us like getting up close and personal. “Let the beast within you loose”, Beauverger teases. With the Vulkod werewolf-vampire already a character in the game, it’s not surprising that you’d get the chance to wreak the same animalistic havoc.

“You will have claws”, apparently, so you can “rip apart a throat” with ease. In mythology and popular culture vampires are famously strong, so although details are sparse at the moment perhaps we could be seeing more melee-based combat emerging. It is too much to ask that Reid will be able to plunge his hand into someone’s chest and rip their still-beating heart out from their ribcage? Eating it could provide a stats buff mid-combat… I’m going to keep my fingers crossed.

Some of us are humble. Modest. Well, not really, but we do like to stay out of the limelight (or the sunlight, in Vampyr’s case) and pick off enemies as and when we choose. Say hello to the shadow branch, where you’ll be using the darkness and your vampiric charm to quell threats before they even know you’re there. Using shadows and hiding will allow you to escape detection. Possibly including a chameleon-type skill which allows you to blend into the darkness, Reid can survey his targets from the shadows using these abilities.

Mentioning “moving fast”, Beauverger confirms that the skill I saw being used in the demo at the Focus What’s Next Showcase is a viable combat option. Vampires have evolved way beyond jumping, instead turning into clouds of black smoke and rushing towards their target, invulnerable whilst moving at this great speed. To affect your foes without drawing your pistol, you can also mesmerise them and take control of minds. We’ve already seen this in the demo, as you can use the skill to lead a victim away into the dark where you can feast on them. Witnessing this in combat, however, would be fascinating - could you turn them against their friends? Send them into a frenzy? Beauverger wouldn’t let anything else slip about the potential of mesmerising, so we’ll have to wildly speculate for now.

There’s a basic set of abilities which you’ll be able to use when you’re sauntering through London’s streets. Mesmerising your victims - *ahem* I mean, beloved friends - has already been covered briefly, but let me spell it out for you. Outside of battle you can plant your hand on someone’s head and force him or her to do what you want. At the moment we’ve just seen that being used to lead them into a dark alley.

Without trying to sound too menacing, I hope there’s plenty of other things you can get citizens to do. Attack someone, pass on a message, bring something to you - perhaps you’ll get more options as you spend more time improving your skill. However, you won’t be able to use it on just anyone. As the game progresses you’ll encounter people whose minds are a lot more resilient to suggestion (meaning that they’re basically incredibly stubborn). You’ll have to buff up your mesmerising ability to match their mental resistance.

Walking through streets is a bit of a clichéd way of travelling (insert hipster sigh here). Vampires don’t have time for that - Reid can jump very fast to cover distances in the blink of an eye, and “move like a shadow through to very high places like a balcony or a roof”. Being higher up will inevitably give you some advantages, spying down on those who scutter along below and allowing you to swoop down on unsuspecting enemies. Or you can wave goodbye to bridges as Beauverger goes on to say that you can “jump horizontally on the other side of a river, for example”. Having overgrown incisors has one extra benefit: you’re immortal! Although whether that’s a good or bad thing probably depends on your point of view. All this choice is almost too much to cope with. Almost.

Zoe Delahunty-Light
Hi, I'm Zoe! When I'm not gushing over Bioshock or playing Dungeons & Dragons you'll find me trying to unearth another ring to add to my knuckleduster-worthy collection.
See comments