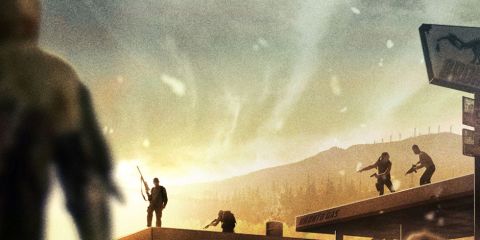 The world is coming to an end. The dead are walking the earth. You're one of the last people alive. How will you survive? In developer Undead Labs open-world title State of Decay, you get a chance to see if you have the chops to live out the end of the world. With addictive progression elements that let you customize every aspect of your apocalyptic survival, State of Decay is one of the best ways to explore a zombie-infested world. There are just a few technical and narrative shortcomings you'll have to get past first.

There isn't much to the story of State of Decay--the plot is just a weak device to nudge you into new areas of the map. The cast is comprised of some less-than-interesting characters, and the environments never step outside the typical desecrated, post-apocalyptic locales like deserted towns or barnyards. That said, the lack of an interesting story doesn't stop the game from being filled to the brim with zombie-slaying greatness. Plus, the game doesn't neglect the overlooked elements of the end times that many games bypass: finding food, medical supplies, and all the other necessities needed to actually live through the end of the world.

In the game's open world, there's a lot to do, including completing story quests, scavenging, and managing the community. Number one on the to-do-list is to make a decent home. The game gives you multiple options to build up your base, whether it be in a residential house, a farm, or an industrial warehouse. From there, there are dozens of decisions to make. The game gives you complete control, allowing you to create a community of your own. Should you build a garden to keep up your supply of food, or focus on upgrading weapons? Every choice has a consequence. If you aren't keeping the infestation numbers down, keeping supplies up, or helping survivors when they get in over their head, your community can succumb to illness, injury, and death.

When you keep survivors alive, your community becomes stronger. State of Decay puts a unique spin on community management by forcing you to swap out your playable character on a regular basis. Characters will tire as they explore, affecting their ability to crush zombie skulls and sprint away from danger. This creates an engaging balancing act as you manage your specialized characters. You might attempt to save your battle hardened survivors for the more dangerous tasks and use the characters with better cardio and fast search abilities to go on quick scavenging runs. It's easy to quickly find yourself in trouble, and if you aren't prepared, you might lose one of your most valuable people to the undead horde.

The braindead zombie mass roaming the countryside isn't an enemy to scoff at. The run-of-the-mill undead walker is slow and easy to take down alone, but when there are dozens coming at you with special enemies like the Feral, Bloater, Armored, and Juggernaut zombies in the crowd, you're in for a quick death. The gameplay has much more depth than mashing buttons and smashing heads. Sound plays an integral part in self-preservation; the less noise you make, the better off you're going to be. Gunshots ring out and alert every ghoul in the vicinity and driving cars attract them in droves. The walking corpses are a glitchy bunch, though. Zombies often get stuck in fences or don't register your presence at all, but the error is usually remedied with a well-placed bullet to the brain. Although the undead have become a far-too-common enemy in video games, Undead Labs manages to make the swarms feel threatening and downright scary at times--especially when a horde is about to eat your favorite survivor.

One of the most enjoyable aspects of State of Decay is exploring the world. The landscape consists of a few small towns and wide-open farmlands ripe with houses, buildings, barns, and warehouses to scavenge. As you search dresser drawers and refrigerators, you can find food supplies, building materials, and ammo to haul back to base for a morale boost. You can also find a surprising variety of zombie-slaying weapons. Melee weapons can range from nail-spiked two-by-fours to Japanese katanas bought on the home shopping network, and there is every type of modern firearm to be found. One downside is that the mission-giving NPC Lily constantly interrupts you with a barrage of imperative missions (which can end with a dead survivor if ignored). It can be difficult to find time to explore a town before having to run off and save someone.

Despite having some thoroughly entertaining gameplay, State of Decay does have a few graphical issues. The game looks just fine when standing still or traveling on foot, but hopping into a car to speed around a bit revealed a significant amount of pop-in. Occasionally, it was so dramatic that a broken-down vehicle would draw-in just a few feet from the car as we traveled down a highway; other times, the vehicle would appear as a textureless purple truck.

Beyond the technical issues, State of Decay is an excellent way to experience the apocalypse. Exploration and progression elements keep the gameplay addictive. The chance of permanently losing characters as a result of your decisions gives every action additional weight, forcing you to truly struggle with the risks and rewards. As long as you can get past the graphical hiccups, this XBLA title will pull you in like a hungry undead cannibal. If you've been looking for a game that will drop you into a deep, zombie-infested world full of all the tough choices and exploding heads you'd expect from the genre, State of Decay most definitely provides.