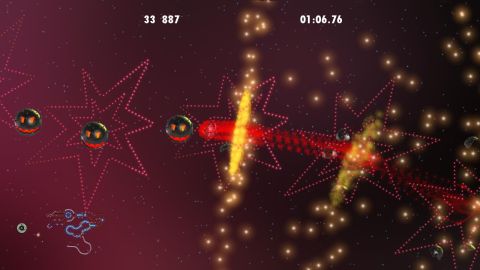 It’s late, our hands are sore, and we just can’t come to grips with how this story keeps ending. For 20 minutes, we’ve been fighting a losing battle. Trying to navigate our little remote-controlled space ship through a myriad of stars, enemies, and poison-spiked obstacles has become a desperate challenge. The first 10 minutes, our brain couldn’t wrap itself around just what to do or where to go; however, the path to take became evident after a dozen deaths and a few lucky bounces. The next 10 shifted to just making it happen; the slightest miscalculation causes our hapless ship to meet an instant, fiery demise. We’re so close now we can taste it – if only we could make that one last turn.

StarDrone has got us right where it wants us. As an addictive action puzzler that combines pinball, tractor beams, outer space, maze exploration, and blowing enemies to smithereens, it executes at a high level. Each puzzle feels visually and viscerally different from its predecessor. Whether we were collecting stars, navigating a complex path, or constructing crystals, many of the setpieces stood out on their own. There was always a sense of accomplishment once we completed one, especially as we moved into the second half of the more than fifty levels available.

The core controls have you remotely control a spaceship – or drone, as it were – by getting it to grab on to various anchors, using a tractor beam to spin and re-direct it where it needs to go. StarDrone supports two control schemes; the Move is the better of the two because of the inherent “pointability” it provides, but the standard controller is also sufficient (if a little less intuitive). In some cases, arrows mark your path, but getting going in the right direction is just the start. Many levels are about collecting a certain number of stars within designated timeframes, others require you to obliterate enemies, while still others have you fetch pieces of crystal to reassemble them in another area of the map.

The mechanics of StarDrone build over time. At first, you’ll learn how to direct your drone by grabbing on to the anchors. Later on, walls that will launch you quickly into Ludicrous Speed will appear, as will directional cannons, pinball bumpers, and shattering crystals. Enemies also come into play, but you can take them out (very satisfyingly, we might add) when your drone becomes a powerful fireball upon consuming enough stars.

At its best, StarDrone combines mental jumping jacks with quick trigger fingers. It’s easy to get lost, particularly in the later levels with hundreds of stars to collect, multiple paths, and enemies everywhere. Luckily, there are on-screen maps that provide a solid breadcrumb trail for the inevitable back-tracking, whether you accidentally miss items or just can’t stop your drone from sling-shotting far off course.

Gold, Silver, or Bronze medals are your rewards for success, yet one thing we love is that simply completing a level (medal or not) will unlock other ones. All but the earliest sections require precise handling and perfect skills to land a Gold, but meandering through and accomplishing your tasks well above the required times still lets you move on. It’s easier said than done as you enter the second half of the game, though, where instant death awaits you from spiked walls or enemies that feel impossible to avoid. To succeed, you’ll need a special kind of patience.

Have no doubt that StarDrone is seriously tough, and is definitely not for everybody; we weren’t quite prepared for it when we started, and it took a while for us to get our sea legs. It also keeps you guessing, as objectives constantly shift – as do the ways you direct your drone around the maps. There were hundreds of times we were whipping the poor drone around at insane speeds, smashing into everything in sight, and having no idea what we were doing. Over time, though, each puzzle begins to make sense, and it becomes a combination of getting your hands to do what your brain knows they need to with precision.

We didn’t know what we were getting into at first, and StarDrone made us feel the pain for a while. Even so, the substantial content was worth the $8 price of admission (only $4 for PlayStation Plus subscribers). Our compulsion to keep playing “just one more level” meant that our feelings and hands would get hurt along the way, but in the end we liked what we saw.