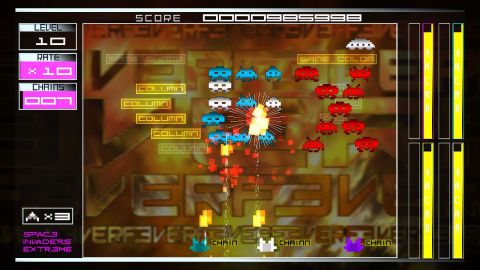 The original Space Invaders arcade game is the videogame version of a 78 RPM phonograph record - it's a sacredtotem of nostalgia for the veteran generation, butit's so primitive and clunky to youngsters that they feel actual pity for the old guys. That's why it's so great thatthisreinvention, Space Invaders Extreme,blends old and new into a colorful, hyperactive, deeper than you'd guessshootathon that gamers of allerasshould love.

The basic concept of Space Invaders is still intact - you have asingle ship at the bottom of the screen and an endless parade of aliens marching down from above. And your gun still makes that airy, somehow comforting "Pish! Pish!" sound when you shoot. Everything else has been sped up, technicolored, and given ADD.Basically, Space Invaders Extreme borrows a page from the WarioWare games and constantly switches up every possible thing it can every ten or 15 seconds.

Both your ship and its bullets move faster than in the old days, there's a throbbing electro-soundtrack, and swooshy, psychedelic stuff going on in the background. You also get a ton of power-ups: bombs, shield, a spread shot, a laser.

The alien formations come in all different shapes and the aliens themselves wear every imaginable color and have a myriad of behaviors.Some carry shields. Some dive-bomb you. Some are gigantic. Some explode like a grenade or split into three whendamaged. Some will actually turn sideways - and because they're only two-dimensional, like a cardboard cutout, this makes them way, way tougher to hit.

There are also bonus games, usually triggered when you blast a flying saucer. Sometimes, it's just roulette to see what special treat you get ("freeze" is our favorite). Other times, it'spuzzle-like "blow up the formation" bits populated by grenade aliens, or a timed challenge to see how many saucers you can blast amid a sea of aliens. Sometimes, it's an end-of-stage boss battle.

The best thing is, it feels equal partsfresh and classic. It could indeed be too hyperactive for the stout historians and the flashy backdrops could be distracting.And it's still basic at heart - not the type of thing that's going to replacePokemon DiamondorFinal FantasyTactics A2on your shopping list. But for quick-to-play, compelling arcade action - complete with a two-player head to head mode -it's hard to imagine a better package. Don't miss this one.