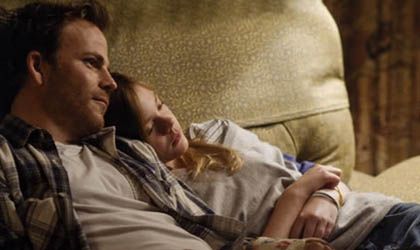 It’s clear from the opening of Sofia Coppola’s ode to fame, parenting and Hollywood (both figuratively and geographically) what you’re going to get.

A static camera watches impassively as a sports car roars around a race track. Once, twice, three times. Minutes pass, the engine thundering monotonously as the car passes in and out of shot.

It’s a distillation of this snapshot film – self indulgent, repetitive, ambivalent. Loaded with long pauses and unblinking shots. Perhaps even pretentious. But it’s also evocative, hypnotic, wry, moving and, like Lost In Translation, open to interpretation.

The same could be said of movie star Johnny Marco (Stephen Dorff, embracing Method), a man barely living in the spin cycle of celebrity.

His days are spent trapped in his luxury hotel, The Chateau Marmont, drinking, dozing; his nights watching pole dancing twins squeak unerotically up and down in-room apparatus.

Under Coppola’s unflinching gaze, celebrity is monotony, loneliness, suffocation (literally in one grimly funny scene at an SFX studio). Want to know what it’s like to lead a room-service existence at The Chateau? Over-the-shoulder views of every nook and cranny, and wink-wink cameos (that A-lister in that lift) allow audiences to practically taste the patio fries and smell the laundry-fresh sheets.

Equally, the constant drone of helicopters and detailed drives up LA canyons and boulevards nails a sense of place –this land of billboards and artifice. Evoking a lifestyle is all very well, but where’s the dramatic propulsion, the heart?

That comes soon enough in the shape of Johnny’s daughter, Cleo (Fanning), a savvy pre-teen who opens Pa’s eyes to the joys of Twilight, sunbathing with someone you don’t feel compelled to small-talk with, or eating a home-cooked meal.

Dorff put in prep time in order to develop a relationship with Fanning pre-shoot, and it pays off. While everything about Somewhere oozes authenticity (from a painfully inept press conference to the real-life Chateau staff), it is the often-unspoken tie between Dorff and Fanning that tickles and gut-punches.

Their relationship invites us to value our own and take pleasure in the little things. To cherish the droop of a child’s head on your shoulder more than a high-performance car, the smell of home over meaningless couplings in crisp hotel suites.

And in this era of star-screwers and fame-chasers, it’s a salient lesson indeed.