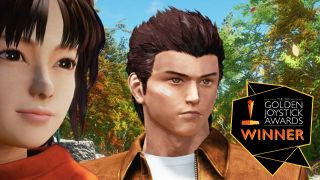 Yu Suzuki, the esteemed designer, producer, and creative force behind some of the most beloved and famous Japanese titles in Sega's history, including Virtua Racing, Shenmue, and Space Harrier, has tonight been presented with The Golden Joystick's prestigious Lifetime Achievement Award.

Suzuki, who is about to release his first new game in five years with the much anticipated Shenmue 3 on November 19, accepted the Lifetime Achievement Award from Burnout and Black developer Alex Ward at the Bloomsbury Big Top in London, as part of The Golden Joysticks' annual ceremony celebrating the best in gaming from the past 12 months.

"This is the 37th Golden Joystick Awards, but it just so happens this is my 37th year since I first entered into the world of game making," Suzuki said during his acceptance speech. "I couldn't be happier to be happier to be here and be given such an award. Thank you very much indeed." Suzuki also reminded us that Shenmue 3 is out next week, the lovely man that he is.

Suzuki began his career in the games industry at Sega in 1993, and worked closely on a number of the company's arcade hits during that era, from Champion Boxing and Out Run to the After Burner series and the now-famous Virtua franchise.

Above everything else, however, Suzuki is perhaps most famous for creating the Shenmue series, the cult classic set of action-adventure games that are about to be continued with Shenmue 3, the crowded sequel that Suzuki's studio, Ys Net, has been working on since it was announced in 2015.

Suzuki joins the likes of Hideo Kojima, Ken Levine, and Sid Meier as the latest honorary of the Golden Joystick's Lifetime Achievement accolade, handpicked by an expert panel of games journalists and critics working across the industry. It's a well-deserved commendation for one of gaming's most cherished talents and, with Shenmue 3 days away from release, I'm sure anyone who has appreciated Suzuki's games in the past can join us in wishing the man a hearty congratulations.