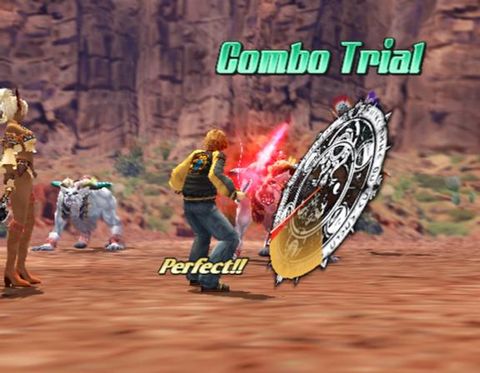 The Shadow Hearts series is an enigma in role playing games. You have one of the deepest combat mechanics in the genre, mixed with some seriously wacky storylines. After jumping the publishing ship from Midway to newcomer XSEED Games, one may worry that the delicate balance the series treads would be in jeopardy. Not so, and Shadow Hearts: From The New World is another truly great and genuinely interesting RPG.

We get introduced to a new cast of characters here, making it more spin-off than sequel. The setting is America, circa 1929, and young Johnny Garland ditches his hefty inheritance to make it as a New York detective. He's a typical orphaned, amnesiac main character, but the rest of the game's story and characters couldn't be further from the norm. Imagine Al Capone cavorting with a talking cat, or two gay merchants flamboyantly peddling their wares in a Native American village in the Grand Canyon. If you have any kind of a sense of humor, you'll find the tale engaging and a welcome departure from the typical.

The Judgment Ring is still the basis for all gameplay. For the uninitiated, it's a ring with a spinning cursor and areas where you need to click a button for successful execution of moves - almost reminiscent of a golf game. Few updates have occurred with it, but damned if it isn't still a clever way to play. Use it for attacks, spells, and even for shopping discounts. Customize the size or type to suit your skill level. Best of all, it forces you to pay attention during skirmishes - something too few RPGs require.

Magic is handled through a convoluted Stellar Chart that never really feels that intuitive. At least it's not too annoying, and it gives you some choices for who holds what spell. Combos are also back, and now you can make one character do double move duty in one turn. Used well, it allows for even more damage during battles.

Perhaps the most exciting thing about the battles, though, is sexy Native American character Shania, and her ability to morph into a variety of demonic forms. Always the cornerstone of the Shadow Hearts series - ex-lead Yuri did it too - this supernatural power returns with full gusto in the sequel. This leads to both brutal combat power and something lovely, if slightly twisted, to look at.