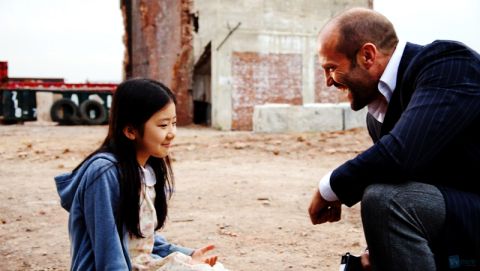 From the Transporter Trilogy to the Crank films and one-offs like The Mechanic , Death Race and Blitz , you know where you stand with Jason Statham. And, what’s more, he usually delivers. Put him together with Boaz Yakin, a writer-director who never quite fulfilled the early promise of his 1994 debut, Fresh , and the result is a surprisingly satisfying, box-ticking action thriller.

It’s set in New York, where the safe in question contains $30 million, a booty that Chinese Triads, Russian Mafia and corrupt NYPD are all itching to get their hands on. The combination is currently stored in the head of Mei (Catherine Chan), a Chinese schoolgirl kidnapped and brought to Manhattan to work for old school Triad boss Uncle Han (James Hong) – primarily because her computer-like brain leaves no information trace.

Meanwhile, Statham’s Luke Wright is a former cop-turned-cage fighter, getting pummelled every night to atone for his sins/give us some fisticuffs. A set of tragic/ contrived circumstances turn him suicidal; about to chuck himself under a subway train, he spies Mei, in flight from the Russians (who’ve just stolen her from the Chinese) and comes to the rescue.

From here on, Luke finds a reason to live, protecting Mei and playing all three money-grabbing parties off each other. Luke’s friendship with the outspoken child may be as calculated as the villains are generic, but there’s no doubting the plot’s energy, careering around New York hotspots in a hail of gunfire (or, as Statham growls, “Been in restaurants all night – all I got served was lead”).

Yakin proves he can handle action well – the hotel shoot-out is a stand-out but few of the set-pieces fail to combust. And Statham embraces his role with relish, dispatching bad guys with killer lines (“I never collected garbage, I disposed of it”) and deadly blows. It won’t change your life, but it will leave you charged.