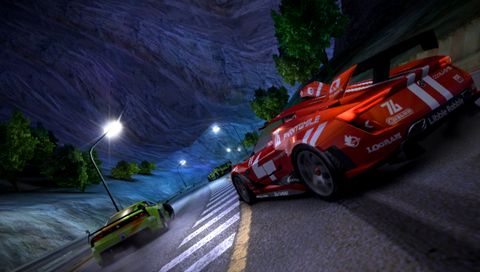 This should be absolutely rubbish. You spend £20/$30 on a game that's basically just a shell, then you buy more content from the download store to pad it out. A car here, a track there... building the game you want to play until you've paid more or less full-price. Sure, there's a 'Gold Pass' pack, which is free for a limited time that gives you 5 more cars and 3 more courses, but that won't be free forever. So the amount of content you have is your choice. Your bewildered, incredulous choice.

But look - we can't review the game based on what you might buy. So this is what we think of the Ridge Racer you can pick up now on launch day. And, incredibly, despite all that, it's not even slightly rubbish. It does mean we have to scrap the 800 word tirade we'd mentally prepared, but we'd much rather have something good to talk about, so let's be about it.

Rewind. When I were a lad and all this was just fields (erm... ignore that screenshot that still is just fields), racing games usually had about three tracks. And even then, people complained it was too little. Me? I didn't mind. I was happy learning those three tracks and squeezing every hundredth of a second I could out of them in time attack. The result was a bond stronger than I get with any modern game.

The tracks had to be good, mind, but while the three circuits on offer here aren't classics by any stretch of the imagination, there's plenty of scope for masterful play and there's plenty of game in here. And that's what matters.

Above: Time trial mode has the usual ghost mode, but it's a key part of this game's appeal

There's a modest amount of customisation - not just in terms of picking the colour of your car, but also unlocking and installing upgrades. They're drip-fed as you play, meaning there's absolutely no way you can see everything the game has to offer in one afternoon. You could argue that it's artificially lengthening the game like PSP's Ridge Racer 2 did and that it's even more obvious when there's so little content to spread it over, but somehow it doesn't seem to matter.

Maybe it's because the ghost mode is so solid. Or maybe it's that the difficulty has been finely honed, providing even long-term fans a challenge even if they've mastered the insane 'drift' system over countless Ridge Racer games in the past. And you know what? I honestly could not care less how many cars a game has. If there's one car that handles superbly (Daytona's Hornet - I love you), anything else is just superficial.

Above: You just wait until you see the pearlescent effect moving across the bodywork

Graphically, the game is very nice indeed. If you buy it from the download store, make sure you download the update because it fixes the frame-rate, leaving it at a mostly solid 30fps. It's not quite the 60fps we're used to from the series, but the game undeniably looks very attractive all the same. And with the low camera coupled with the Vita's massive screen, the sense of speed is terrific. It's exciting to play and that's no mean feat for such a familiar game.

Above: The speed blur during boosting is subtly underplayed compared to some versions, but does the trick

The game has 8-player wireless racing complete with text chat and a kick function (hehe), although it doesn't support download play. You can also use 'near' like Nintendo's 3DS SpotPass system to download ghosts from players in your local area. The emphasis is on time trials, which is actually pretty refreshing. No 'do 5 donuts in the marked areas' or 'get 3 seconds air-time over 5 laps'. You want a racing game to test your own capabilities? This is it.

As a result, it's one of my favourite launch games. More immediately fun than F1 2011, easier to control than Wipeout 2048 and yet incredibly deep and complex in terms of its control system. Drifting may not be to everyone's taste, but it gives you incredible control over your car, which is essential if you're going to get any reward out of time trial.

Even if you do buy the upgrade packs, it's still cheaper than most Vita launch games and the quality is higher throughout than the 3DS edition of Ridge. Of course we condemn this piecemeal approach to selling a game - the model might work on iOS where you get one track time-trial for free and then buy the rest once you're hooked, but that's because nobody will drop £20 on an iOS game. But we're talking about a premium piece of entertainment here - console-quality gaming. It should be a full console game.

As it is, the content you get is like the PSP games mixed with Ridge Racer 6 on Xbox 360. Not something you'd think would work, but the result is fast, pretty and supremely playable, perfect for keeping on your memory card and dipping into when you've got a few spare minutes.

Above: It's Ridge Racer! Riiidge Ra... oh, done that one. Sorry

I know I sound mad when I say the lack of content doesn't kill it, but it truly doesn't. I can tell I'm going to be coming back to this for months, even without the extra tracks. This is a surprisingly fun game and I'm glad it exists. Good ol' Ridge Racer.