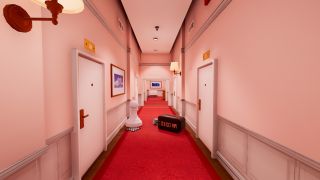 There ought to be a separate genre for games that strike gold with a single idea. You know the ones I'm talking about. Fez, Superhot, Braid; the kind of experiences usually endemic to the indie scene that can so often leave more of a lasting impact than your average AAA blockbuster, thanks to the genius of their central mechanic. Superliminal has all the trappings of such a title; a wholly unique puzzler from new studio Pillow Castle, the game hit PC last year and is finally making its way to consoles in 2020, starting with PS4.

The concept is simple. Operated from a first-person perspective, the player is able to manipulate the size and location of objects in the game world by experimenting with the distance or angle at which they pick them up or put them down. Turn a can of soda into a giant rolling pin, shrink down an entire staircase to pocket size, or manifest a chess piece out of a Trompe-l'œil painting; do whatever needs doing, effectively, to get from one area to the next across Superliminal's five hour campaign.

"The original idea came from just trying to figure out new, more interesting ways to move objects," explains creator Albert Shih, who first started working on Superliminal as part of an assignment at Carnegie Mellon University in 2013. "After a dozen complicated thought experiments, there was a sudden thought of 'well, what if you dropped an object and it was just like the way you see it?'"

The 10 best puzzle games for console, mobile and PC

Realising he had stumbled upon the potential for a full video game, Shih recruited the help of his fellow graduate students to flesh the project out, before officially founding Pillow Castle Games in early 2014. Five years later, Superliminal launched as an Epic Store exclusive on PC, complete with its own fully formed story that serves as the much needed contextual wrapper to the game's escherian format.

Drawing liberally from games like Portal and The Stanley Parable, the player takes the role of participant in a lucid dream therapy program, tasked with trying to escape the depths of their own subconscious. Narrated by what appears to be a delightfully soothing David Tennant impersonator, it's as quirky and off-kilter as you'd expect, but Shih admits that knuckling down the tone and major plot beats of the story was no walk in the park.

"We knew that players wanted a narrative all along, but the question was what kind of story, and how much should it be a part of the overall experience," says Shih. "We tried a ton of different things, but in the end decided to tie everything back to perspective, since it's the core concept of the game."

That said, the conception of the dream-state setting did at least help Pillow Castle solve another problem it was having in trying to figure out a title for its first commercial game.

"Our work-in-progress title, Museum of Simulation Technology, was already known to a lot of people, but we knew it didn't quite explain the game and people could never quite remember the whole title," Shih continues. "Because our game is set in a dream world, the word 'subliminal' popped up a lot. In the end we twisted that to end up with 'Superliminal', which also has the fun real definition of 'existing above the threshold of subconsciousness'. Basically the opposite of subliminal!"

Superliminal is set to release on PS4 in April, as announced – in what Shih calls a "pretty cool moment" – during PlayStation's State of Play livestream last December. Even so, the information Pillow Castle Games has been able to gather from players' feedback on the PC version of the game has already allowed the studio to identify and address certain issues it hadn't anticipated.

"One thing we didn't quite expect is that some players really love exploring unreachable areas using the different mechanics in the game. We're working on a patch to add bits of surprises and moments of discovery when they do that!"

But what's next for Pillow Castle? Hopefully more ports to "multiple consoles" beyond the PS4 release, according to Shih, suggesting Xbox One and Nintendo Switch players hopefully won't have to wait too long to enter Superliminal's world of preternatural puzzles. After that, thought, Shih is already thinking about "new projects" on the horizon. Given its first project went on to become one of the most interesting games of 2019, I'd say Pillow Castle one to watch out for.