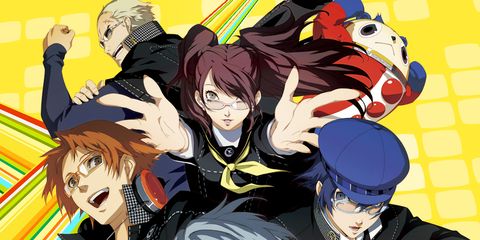 Shin Megami Tensei is a polarizing franchise that attracts as many new fans as it repels, with bizarre tales and often macabre setpieces that go all-in on anime aesthetics. To see a niche RPG such as the Persona series garner such a strong following is a breath of fresh air, namely with Persona 4, one of the most popular MegaTen departures yet. The cult hit returns with renewed vigor to a much smaller screen with Persona 4 Golden, a souped-up Vita port. With brand new content and slick updates, this is the definitive way to experience the gripping tale of the Midnight Channel.

You fill the shoes of a student who's just moved from the big city to the rural town of Inaba, to room with his new caretaker Detective Dojima and daughter Nanako. Shortly after the move, a murder occurs. Amidst the chaos, you're getting cozy with fellow students Chie, Yosuke, and Yukiko, who surmise that the murder, and others that follow, might have been a crime of passion. Soon after, you discover a world inside the TV where the killings seem to be taking place. You've got to get to the bottom of things before even more lives are claimed, including yours.

At its core, the turn-based gameplay is relatively unchanged from 2008, but there are plenty of tweaks and rearrangements in place that make you feel as though you're playing an entirely new game. You'll still rise each day and head off to school. Just like in real life, you'll attend class, join one of many after-school clubs, and tackle odd jobs when you get home. Unlike real life, you can also venture into the world inside the TV to navigate dungeons.

The TV world transforms into a differently themed dungeon area with each new victim that must be rescued. This is where you'll spend most of your time in-game if you mean to discover every Persona and every one of the Midnight Channel's secrets. You've got the average turn-based exhibition seen in the majority of JRPGs, except teammates are by default not directly controlled. Instead, you change party tactics between full assaults, conserving ability points or the consumption of healing items whenever possible.

The tactics work reasonably well, and Persona 4's AI manages to make the correct decisions most of the time--but in some boss battles, it becomes a frustrating game of Russian Roulette. Will your teammate use a healing item on you since it’s game over if the protagonist dies? Or will they use a spell that the enemy is immune to and waste their turn? You can never be sure. This isn't a problem unique to P4G or the series in general, but it's still worth mentioning as a frustration. Other than that, combat is vivid and entertaining, with a wide variety of wicked enemies to defeat.

Dungeons may be the most integral part of the campaign, but don’t think that you’ll get far without taking the time to manage your time effectively. You can waste every single day balancing school work, your job, social engagements, and recreational activities and ignore your training in the TV world if you'd like, but that won't be helping your cause. It can be a bit tough to walk the line between eradicating Shadows in the dungeons and learning about Mesopotamia, but it's an endlessly satisfying one.

The aforementioned new content is expertly woven into the narrative that's already in place--so fantastically, in fact, it feels as though you're playing through pieces of the game you just didn't experience on your first playthrough. The most obvious addition comes in the form of a brand new character: the standoffish Marie, who acts as another Social Link and carries with her a rich narrative that should please even those who completed the game back upon release. If Marie doesn't catch your eye, dozens of new school trips, events, and other Social Links are available for completion, as well as new scripted dialogue.

If you felt claustrophobic in Inaba during your forays throughout the town, you can now breathe a sigh of relief. Via motor scooter (a hilarious-yet-efficient mode of transportation new to P4G), you can journey to the neighboring city of Okina, where different shops and additional experiences await you--particularly, a clothing store where you can buy outfits for your party that add purely aesthetic value. A smattering of new Personas, customizable parent movesets for Fusions, and brand new cutscenes round out the package. You can even view musical selections, animation, and other pieces of media via virtual television listings and other programs.

For those wishing to take the journey to the 'net, P4G offers online options for the first time ever. Vox Populi allows you to check your in-game decisions against others who have completed them prior to you. Alternatively, if you're feeling less inquisitive and more helpless in the dungeons during your grind, you can use SOS to call for help from friends via Wi-Fi.

Persona 4 Golden sports a phenomenal amount of content packed into a single card. One of the PlayStation 2's greatest role-playing games of all time graces the Vita with slick, vivid aesthetic improvements, loads of additional areas to explore, and tons of reasons to come back even if you've beaten the game into the ground. If you're looking for your brand-new RPG addiction, pick up a copy of Persona 4 Golden and prepare to lose hundreds of hours of your life to the Midnight Channel. Whether veteran or spirited beginner, you won't be disappointed.